On Tuesday, California’s highest ranking statewide official to support marijuana legalization spoke before hundreds of people anxious to see that change happen in November. “Our purpose is social justice,” Lt. Gov. Gavin Newsom told the crowd gathered in Oakland for the annual Cannabis Business Summit, “to right the wrong of the abject failure which is our war on drugs in the United States of America.” The line earned him a huge cheer.

In November, California voters will very likely have a chance to make their state the fifth to legalize recreational marijuana for residents 21 and over, following Colorado, Washington, Oregon, Alaska and the District of Columbia. Though a slight majority of California voters support legalization (53%), the proportion is lower than U.S. voters on the whole (58%), with liberals and young voters more likely to say they approve.

In his policy keynote, Newsom emphasized that the campaign was far from won despite popular conceptions of California as a progressive place that embraces all the trappings of counter-culture. “If any of you think this thing is done in California, you are wrong,” he said. Newsom noted that voters rejected legalization not too long ago, with just over half of voters casting ballots against Proposition 19 in 2010.

California became the first state to legalize medical marijuana in 1996 (something that 23 other states have now done), and Newsom lamented the state’s failure to be “on the leading and cutting edge” of legalizing recreational pot. The lieutenant governor, who is running for the California governor’s seat in 2018, has taken a political risk in aligning himself so closely with a measure that could alienate older swing voters as much as energize youthful ones. “No human being,” he said, “wants this to work more than me.”

Newsom organized a blue ribbon commission with representatives from law enforcement, academia, children’s advocacy groups and organizations like the American Civil Liberties Union to study the myriad policy questions that come along with legalizing marijuana, with the commission releasing a report with dozens of recommendations last year.

In his speech, Newsom said he had spent time touring the state and hearing the concerns of people on issues ranging from smoking and driving to protecting small pot farmers long established in the Emerald Triangle. He conveyed to the industry members that he understood the complexity of details at stake, admitting “the initiative isn’t perfect,” while emphasizing that the ability to make changes after passage was built into the initiative’s language.

The initiative that voters will likely see in November was one of more than 20 that were initially proposed. With the financial help of tech billionaire Sean Parker, the backers of the Adult Use of Marijuana Act announced in May that they had collected nearly twice the 365,880 required signatures. The initiative is now pending signature verification by the Secretary of State before it officially qualifies for the ballot.

Newsom framed his support for legalizing marijuana as a move for racial justice and economic empowerment, repeatedly citing the higher drug-related incarceration rates among black and Hispanic residents and estimating that the legal industry would quickly become one worth more than $10 billion in the state. Newsom also acknowledged the political clout that the state could bring to fixing big problems for the industry, particularly disconnects between states that treat marijuana as a substance on par with alcohol and a federal government that stills view pot as the legal equivalent of heroin.

One of the biggest issues is access to banking. Because of federal restrictions, marijuana businesses still operate largely in cash, which poses logistical and security risks for the type of small business owners and operators who had come to hear Newsom speak. California—which would have the eighth largest economy in the world if it were a country—would have a “potent and powerful voice … in those national debates,” he said, predicting that the impact of California legalizing marijuana “will be felt not only across the rest of this country. It’s going to be felt outside the borders of this country.”

Attendees at the expo—which was purposefully polished and devoid of psychedelic-style branding long associated with pot culture—tended to agree. Elizabeth Kost runs a branding company called Purple Line Media in Northern California, and was showing off the makeover the firm had done for Santa Cruz-based marijuana company Big Peet’s, replacing a Rastafarian-decorated plastic bag with mod, subtle packaging that looked like it could be for high-end granola.

“The industry will multiply four-fold with legalization in California,” she said, noting that there could be complications in her line of work if the state’s dozens counties choose to write different rules for how pot products have to be packaged. “It is going to get a little convoluted. This is the gold rush, and this is sort of the Wild West.” 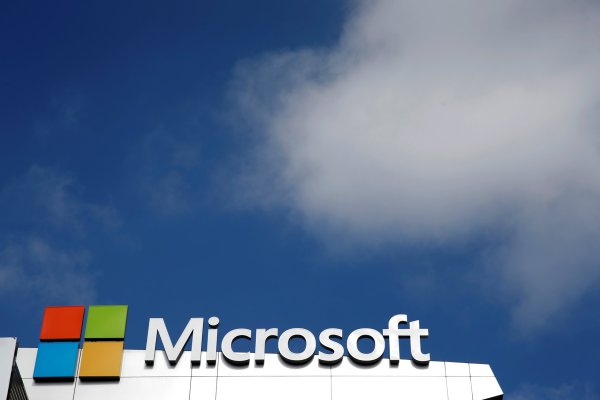 Microsoft Gets Into Legal Weed Business
Next Up: Editor's Pick