Watch Kelly Clarkson Tease Her Next Project Through Song

Back in 2002, Kelly Clarkson became America’s first major reality TV pop star when she won the inaugural season of American Idol with her powerhouse pipes.

Now, the mother of two (including a two-month-old baby) and certified hit machine is coming back from a doctor-ordered work hiatus — she’s been on strict vocal rest for the last two months— to tease a new, mysterious project with some impromptu performances on Facebook Live.

On Monday, she launched a week-long series of Facebook appearances, hosted in her living room at home. Each day, she’s performing stripped-down covers of fan-requested songs alongside her pianist and musical director, Jason Halbert. And at the end of the week? Apparently she’ll be dropping some big news.

“I’m just really nervous because I haven’t done anything in a while, so I hope this doesn’t suck. And if it does, whatever! You can laugh at it!” she said on her first broadcast. As for the announcement at the end of the week, she said it’s “the coolest announcement for me as an artist, and I don’t want to ruin it.”

Then she started singing, and c nailed a soulful rendition of Otis Redding’s “These Arms of Mine.”

“If I get carried away and do all my white girl runs, I’m sorry, I’m just excited to sing,” she prefaced the song.

For her second Facebook Live on Tuesday, Clarkson gave us her version of “I Want to Know What Love Is” by Foreigner. As she fielded audience questions, Halbert held up posters dropping hints about what Friday’s big announcement is not: we can now rule out another pregnancy, a new album, and (thank God) a sequel to From Justin to Kelly, the ill-fated musical that Clarkson starred in alongside Idol runner-up Justin Guarini.

So at this point, your guess is as good as ours. 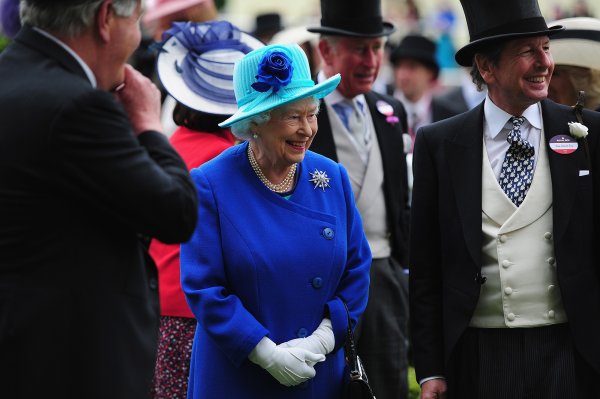 Queen Elizabeth Just Sent Out A Personal (and Very Polite) Thank You on Twitter
Next Up: Editor's Pick