As Donald Trump met with hundreds of evangelical leaders inside the Marriott Marquis in New York City, dozens of faith leaders from different religions gathered outside to protest what they saw as bigotry and fear-mongering.

Organized by the PICO Action Fund, the Faith Over Fear vigil brought together a diverse coalition of faith leaders, including a a monk, several rabbis, numerous priests and nuns, at least three reverends, at least one imam and one Buddhist.

They held signs with slogans like “Jesus Doesn’t Build Walls,” “Refugees Welcome,” and “‘Don’t Vote for That Guy’ — Jesus,” while singing gospel songs and chanting their support for Muslims, Hispanics, people of color and the LGBT community in a call-and-response format. A group of Jewish protesters also joined the protest, holding signs saying “Jews Reject Trump” with the hashtag #We’veSeenThisBefore.

While Trump’s name was never mentioned in the protest in order to preserve the 501(c)(3) status of the organizations in attendance, the event’s true target wasn’t lost on anyone. Leaders repeatedly condemned the presumptive GOP nominee’s comments about Muslims, his much-repeated promise to build a wall between the U.S. and Mexico and his proposal to deport millions of undocumented immigrants.

“I think he willfully inspires fear,” said Rev. Stephen Holton of St. James Episcopal church in North Salem, New York. “I don’t think he tries to inspire confidence in our country and in other people.” He said his congregation was “eager to be part of the healing.”

Rabbi Michael Feinberg said the gathering was about embracing the religious plurality that he says has been key to our national character. “We want to remind America what’s best about ourselves, which is that we have an inclusive, welcoming society,” he says. “That’s what makes America great.”

Not everyone in Times Square agreed with the protest. David Dana, a mechanical engineer from Rochester, NY, rolled his eyes as he walked past the protest. “They have a right to demonstrate,” he says, “but I disagree with the premise that inclusivity and diversity are a good thing.”

“There is evil in this world, and there are people in this world—and I’m talking about Muslims driven by Islamic faith—who want to do away with everything we hold dear,” he said. Dana, who is a born-again Christian, scoffed at the coexist symbols proudly displayed on the religious garb of many of the faith leaders at the demonstration.

“There has to be a truth,” he added. “People have their own beliefs, but some people believe the wrong thing.”

“If a group is all made up of one people, it’s not representing the Kingdom of God,” said Ryan Phipps, lead pastor of the Forefront Church in Manhattan. “The reason there’s plurality here today, it’s because this is what the Kingdom of God is supposed to look like.”

Speaking after the press conference, Noel Castellanos, President and CEO of the Christian Community Development Association in Chicago, wouldn’t say whether his criticism of Trump amounted to an endorsement of Democratic rival Hillary Clinton. But he emphasized that his mostly Mexican-American flock would be heading to the polls in November.

“We’re going to mobilize our community to vote, and our communities are listening to the candidates just like everybody else,” he said. 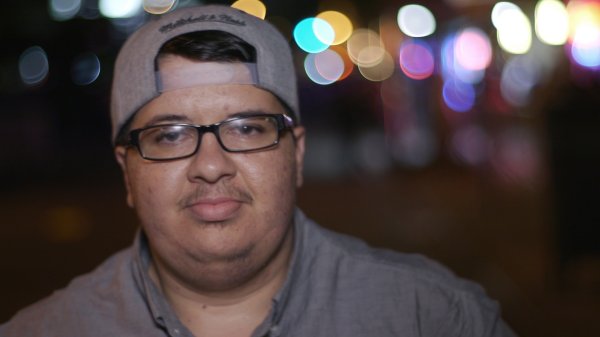 What It's Like to be a Transgender Muslim After the Orlando Shooting
Next Up: Editor's Pick