A flotilla of fishing trawlers, organized by UKIP leader Nigel Farage, sails up the river Thames next to the Houses of Parliament in London, June 15, 2016.
Facundo Arrizabalaga—EPA
By Dan Stewart

On Thursday, Britain will vote on whether to remain a member of the European Union or sever a decades-long relationship with the supranational group. Like all long-term relationships, this one has had its ups and downs ever since a patchwork of European nations first decided it would be beneficial to trade as a bloc. Here, a quick history of the U.K. in the E.U. and its forebears, told entirely in quotes:

1948: “We cannot aim at anything less than the Union of Europe as a whole, and we look forward with confidence to the day when that Union will be achieved.”

Winston Churchill, expressing his support for postwar European integration at the opening session of the Congress of Europe—and yet Britain was not one of the members of the first forerunner to the E.U., the European Steel and Coal Community, when it was formed two years later.

A quote attributed to Russell Bretherton, a junior civil servant from Britain’s Board of Trade sent to Brussels in 1955 to join officials from six European countries for early discussions about creating a common market. When it was formed three years later, Britain joining was not even discussed in parliament. But by 1961, Harold McMillan’s government had applied for entry.

1962: “It is the end of a thousand years of history. You may say, alright, let it end, but my goodness, it is a decision that needs a little care and thought.”

Hugh Gaitskell, Labour leader, speaking at his party’s annual conference, in October of that year. Among other things, the leader of the opposition was concerned that joining Europe would threaten Britain’s economic and political relationship with the Commonwealth. He needn’t have been too worried; Britain’s application to join was promptly vetoed by member states that feared the U.K. was still too close to the U.S.

1967: “There is the Common Market, and for us, there is no problem. For you, there is one: you want to get in, and that is your problem.”

General Charles de Gaulle, responding to a question by British Foreign Secretary George Brown about how to solve the problem of Europe. The French leader vetoed British accession to the European Economic Community (EEC) for years, as he believed they wanted to join only out of necessity. The U.K. was only able to sign up in 1973, after De Gaulle had left office.

1974: “I would deplore a situation in which the policy of this great country should be left to housewives. It should be decided instead by trained and informed people.”

Belgian official Jean Rey, then chair of lobbying group the European Movement, speaking on the question of whether the British government should put membership in the EEC to a public referendum. It did, the following year.

1975: “It was a free vote, without constraint, following a free democratic campaign, conducted constructively and without rancour. It means that 14 years of national argument are over.”

Prime Minister Harold Wilson shortly after the referendum, in which the British electorate voted 2-to-1 to remain within the EEC. Unlike today, the Conservative Party was united in support for remaining within the bloc, and the Labour Party generally opposed.

Prime Minister Margaret Thatcher, demanding the U.K. be given a fair deal when it came to contributing to the EEC’s budget. It would take her five years to get her wish, in the form of a yearly rebate that still exists today. But the exemption is still a bone of contention among other member states, especially larger economies Germany and France.

1988: “We have not successfully rolled back the frontiers of the state in Britain, only to see them re-imposed at a European level, with a European super-state exercising a new dominance from Brussels”

Thatcher again, addressing the issue of European integration in her famous “Bruges” speech on Sept. 21 of that year. The EEC commission was then tentatively beginning to plan for a European government.

British Foreign Secretary Douglas Hurd joking about the Maastricht Treaty, which officially created the European Union, on the day it was signed on Feb. 7, 1992. The treaty was not quickly ratified by the U.K. government: left-leaning lawmakers were angry that the Tory government had secured an opt-out affecting issues such as employer safety and pay, and those on the right of the Conservative Party opposed it completely.

Read next: 5 Reasons Americans Should Care About the Brexit Vote

2001: “The tragedy for British politics — for Britain — has been that politicians of both parties have consistently failed, not just in the 1950s but on up to the present day, to appreciate the emerging reality of European integration. And in doing so they have failed Britain’s interests.”

Prime Minister Tony Blair, months after winning re-election and weeks before the introduction of the euro. The U.K. had secured (another) opt-out from a requirement to join the single currency in 1992. Blair was not against signing Britain up, though — as long as the currency met five economic tests prescribed by Chancellor Gordon Brown, and the electorate approved it in a referendum. In the end, it didn’t pass the Brown test.

2010: “I don’t want to be rude but, really, you have the charisma of a damp rag and the appearance of a low-grade bank clerk, and the question I want to ask is: Who are you? I’d never heard of you. Nobody in Europe had ever heard of you.”

Come Friday, we’ll learn if one does. 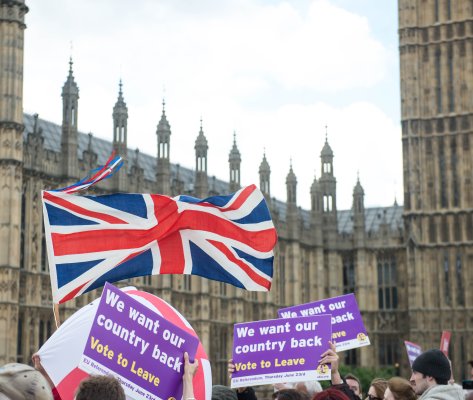 Britain and Europe Have a Long History of Conflict and Cooperation
Next Up: Editor's Pick