For a small village in southeastern China, Wukan boasts an outsized profile. In 2012, the fishing hamlet in Guangdong province earned nationwide fame for an unusual resolution to months of tensions between authorities and protesting farmers whose land had been seized without proper compensation. Wukan villagers were allowed to elect their own leaders to represent their interests. As local party secretary, residents chose protest leader Lin Zuluan. Unlike in many parts of China, where land-grabs ran unchecked because they fattened local government coffers, Wukan was supposed to represent a new way of protecting individual rights. State media wrote admiringly of the “Wukan model” in which voters controlled their futures.

But on June 20, Lin, the people’s choice, appeared in a video in which he confessed in robotic tones to accepting bribes related to local construction projects. Far from applauding the Chinese justice system for apprehending dirty officials, many Wukan villagers believe their elected leader was the victim of political machination. Earlier this month, Lin had campaigned against what he said were continuing efforts by developers to appropriate local land. On June 17, shortly before he was to have convened a public meeting on the property dispute, Lin was detained during a nighttime raid by police from Lufeng city, which controls Wukan.

Protests Erupt Again at a Village Once Hailed Across China as Model For Local GovernanceAfter Lin was taken away, Wukan villagers resorted to what they are now experts at doing: protesting. On Sunday, they marched by the thousands in support of their chosen chief. Another rally coalesced on Monday. Although Wukan may have voted in its leaders, residents say that property disputes still fester and local officials have little power to resolve them. “At the beginning, I was full of hope,” Wukan teacher Xue Jianwan told TIME. “But later on the government always used stability-maintenance methods to ease problems.” “Stability maintenance” is the Chinese government term for suppressing protests through any means necessary, including brute force. Last year, China was seized by a record number of so-called “mass incidents,” according to a Hong Kong watchdog, which attributed much of the unrest to land problems.

The fate of Xue’s own father, Xue Jinbo, propelled Wukan into the news five years ago. He was a representative chosen by locals to negotiate with authorities during the protests. Xue lobbied on behalf of landless farmers who wanted compensation for being forced by a previous long-ruling party secretary to give up their ancestral soil. But in late 2011 Xue was detained by local authorities. He died while behind bars. Officials said Xue had perished of natural causes; his family believes otherwise. On June 20, his daughter put her support behind Wukan’s latest detained village chief. “Lin was so brave to step out and lead the villagers to go petition again,” she told TIME. “The villagers supported him and admired him again. He united people.”

But other Wukan residents have a different take. In 2014, two of the village’s elected deputies, also protest leaders, were arrested for bribery—the same charge being leveled against Lin. One of the former deputy village chiefs, Hong Ruichao, is still in jail, after having confessed to his crimes. His father Hong Tianbin claims his son was influenced by Lin to accept kickbacks—and alleges that the village chief had taken far more in bribes than his deputies. “It’s like a big stone in my heart,” Hong says. “I thought, ‘why wasn’t Lin Zulian sent to prison?’ Now he is arrested finally, and he deserves it.” (Separately, however, Hong says that he supported Lin’s efforts to compel property developers to properly compensate local residents.)

Whatever the truth about Lin, a fishing village in southern China is now again big news—even if by Tuesday, Chinese Internet censors had banned the viral keyword “Wukan” from local search engines. A Guangdong province official was quoted in state media blaming reporters from nearby Hong Kong, which enjoys more press freedom than the mainland does, of instigating the latest Wukan protests. The Global Times, a daily affiliated with the ruling Chinese Communist Party, published an editorial pointing out the limits to electoral politics. “Disputes over property rights cannot be solved merely through democratic means,” the paper wrote. “Encouraging confrontation or radicalism should not be allowed.” And on Tuesday, after Lin’s confession had been aired, Xue, the daughter of the former village representative who died in detention, was more circumspect. “I read the news but none of us believe it is true,” she told TIME by phone. “Sorry I cannot say more because my phone is being monitored.” 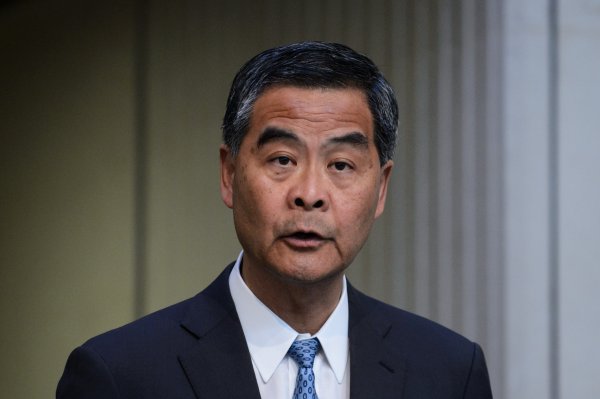 Hong Kong's Leader Asks China for Answers on Booksellers
Next Up: Editor's Pick