Chinese people watch live television coverage at a conference room in Yantai, east China's Shandong province as Chinese Premier Li Keqiang delivers his report during the opening ceremony of the National People's Congress in the Great Hall of the People in Beijing on March 5, 2016.
AFP/Getty Images
By Hannah Beech / Shanghai

Cleavage, even if it’s historically accurate, is already taboo. So are time travel and one-night stands. Now China’s entertainment censors are pulling most foreign-inspired TV shows from the air. Why? To “boost self-innovation of Chinese TV channels,” according to state newswire Xinhua.

The new regulations go into effect July 1 — under orders from the State Administration of Press, Publication, Radio, Film and Television (SAPPRFT) — and impose “strict limits” on programming that is modeled after overseas sensations like The Voice. Many Chinese satellite TV channels have turned profits by peddling locally made copies of foreign hits. Starting next month, nearly all prime-time slots will be reserved for “self-innovated TV programs with Chinese cultural inheritance and characteristics [that] can better carry the Chinese Dream themes, the socialist core values, as well as patriotism and Chinese fine traditions,” according to Xinhua.

The Chinese Dream (also known as the China Dream) is the catchphrase of President Xi Jinping, who has urged the nation to reclaim its historic heritage and innovate with the kind of transformational fervor that made ancient dynasties so powerful. Billions of yuan have been put aside to fund scientific innovation, even as the nation’s censorship machinery prevents local researchers from accessing useful online resources. Chinese TV shows, it turns out, are also part of this innovation campaign.

For decades, Chinese TV was dominated by programming designed to dispense socialist wisdom to the masses. Wartime dramas — full of marauding Japanese and deceitful Nationalists who massacred Communist forces — underlined the ruling party’s heroic narrative that it was the only force that could defend and unite China. TV specials, such as the annual lunar new year gala, showcased warbling ethnic minorities, dancing soldiers and child acrobats.

But with China’s market reforms, diversity flourished on the airwaves. Chinese audiences were treated to South Korean-style soap operas and singing competitions that allowed citizens of an authoritarian country to cast votes for their favorite contestant. Reality TV shows starred actors and athletes who seemed more concerned with showing off their personal achievements than expressing socialist core values.

An official backlash against such frothy programming has intensified under Xi’s leadership, with everything from “sexual freedom” and “luxurious lifestyles” banned from the airwaves in March. This year’s lunar new year gala, watched by more than 700 million viewers, featured an amped-up dose of socialist spirit, earning the show widespread derision online.

At least for college students there are other diversions beyond reality TV. As part of a mounting effort to rid campuses of so-called “hostile foreign forces,” Chinese educators have doubled down on Marxist study and “ideological guidance”—even if Marx was, in fact, a foreigner. One million Chinese college students have taken part in a Young Marxist project, according to the party-run official China Youth Daily. 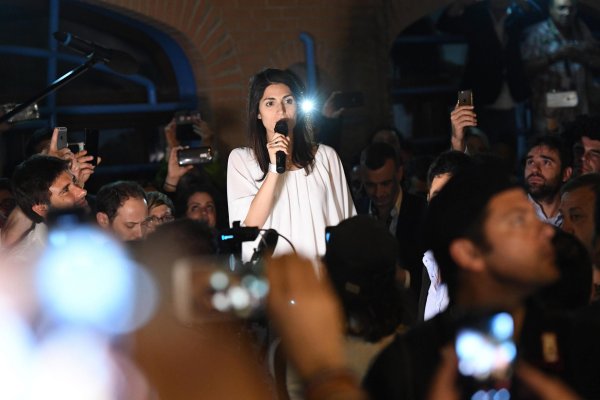 Rome Just Elected This 37-Year-Old Lawyer As Its First Female Mayor
Next Up: Editor's Pick