The Bachelorette Watch: JoJo Goes for Some Southern Comfort

Welcome back to The Bachelorette where JoJo’s journey to love took her to a remote Pennsylvania wood with two men, but only one emerged unscathed. She left the other to fend for himself, The Revenant style. Now her journey continues without Chad … or does it?

The Chad Bear: After getting publicly dumped, Chad is gone but not forgotten. The men gather together to sprinkle his ashes a.k.a. his protein powder in the woods offering not-especially kind words of farewell. Wells, the DJ who has a way with words and is FAR TOO GOOD for this show, shares a few thoughts over the protein powder before yelling, “Death to Tyrants” and drop kicking it into the sunset. JoJo said farewell, the men said their goodbyes, but Chad simply won’t take “go home” for an answer. He just didn’t accept it. He knocks on the door of the mansion and the men all glance at each other hoping he didn’t come back for his protein powder. Chad wants to blame the men to their faces. After trying to talk to him, the men suddenly realize that if they ignore Chad, he will go away. And he does. But not for long! Hopefully they can import deli meat to Mexico, because Chad is heading to Bachelor in Paradise.

The Cocktail Party: JoJo steals a dress out of Ursula the Sea Witch’s closet and joins the men for a glass of wine (not a bottle, though). She takes the time to remind them that she cares about and respects each of the 13 men she is dating simultaneously. Then she makes out with them. Then some guy (James? Evan? Travis?) gets up the gumption to read her a poem he’s been carrying around in his pocket. She smiles politely like he’s a very unpopular 4th grader. Then the guys who already have roses broke the bro code and horned in for some alone time with JoJo. Alex, the Marine who may have seen some action in Iraq or Afghanistan but will forever be best known for emerging victorious in the Battle of Chad, gets a pass, but Luke is rubbing the Erectile Dysfunction specialist the wrong way (yes, that sounds bad). Jordan grabs JoJo and just pushes her against a wall and starts kissing her.

The Rose Ceremony: Luke, Jordan and Alex all have roses already, so JoJo gives her first rose to Derek (Fake John Krasinski)?, Robby with the good hair, Chase, Wells the DJ, Grant the firefighter, Vinnie who should be sent home for wearing a yellow shirt, James Taylor and the Erectile Dysfunction specialist. That means Damn Daniel has outlived his usefulness and that JoJo is not a poetry fan, because she sent him home. He leaves with dignity, but Damn Daniel fizzles out in a wave of damp squibness and Chad-inspired arrogance. The rest of the men are traveling with JoJo to exotic and romantic Punta del Estes, Uruguay and suddenly this reporter wants to be on The Bachelorette (or maybe just in Uruguay).

The First Date: Jordan gets the date card and there’s a collective sigh. Jordan fluffs his hair and heads out to his date. But JoJo has other plans. She just so happened to meet one of his ex-girlfriends who strangely doesn’t think he was a good boyfriend. (Weird, right?) JoJo grills him about his bad behavior and while Jordan won’t admit that he physically cheated, he admitted he may have overly enjoyed talking with other women. According to the NFL publicist’s playbook, the best way to change the subject from your own infidelities is to quote your pastor, which is just what Jordan does. And JoJo falls for it. She pins a kiss and a rose on Jordan.

The Bachelorette Milestone: Jordan and JoJo make out on a Catamaran.

The Drama: Vinny, who was apparently kept around for his hair-cutting skills, is giving the men trims when they find a copy of some gossip magazine in his ersatz barber shop. (“Men love gossip”— Vinnie.) The mag is filled with news about JoJo and her ex-boyfriend and, in a brilliant bit of Bachelorette turnabout, the men are suddenly doubting whether she is there for the right reasons. It’s really just a cautionary tale about leaving men alone with gossip magazines.

When JoJo says she is feeling very happy and content and can’t imagine what could bring her down, some producer cackles off camera and shoves a copy of the magazine in JoJo’s face. When she sees what her ex-boyfriend said about her, she has a crying meltdown about love, gossip and betrayal. Luckily she has 10 good looking men (and one not so good looking) to comfort her in her time of need, so she throws on a sweater robe and takes the elevator to her harem of hunks and cries prettily while they make tut tut noises and threaten to kick his ass for making her cry.

Group Date: Before Luke, Derek, Chase, Evan, James, Vinny, Grant, Wells and Alex head out on their group date, Jordan and Robby with the Good Hair hit the spa for facials and pedicures and some play by play. They hit the dunes for some sand boarding and the Erectile Dysfunction Expert manages to not get a bloody nose.

The After Party: Fake John Krasinski is struggling with the fact that his girlfriend is dating 10 other guys. He needs a lot of reassurance from JoJo. Alex the Marine doesn’t like Fake John Krasinski though, because he thinks he’s insecure. JoJo must sense the same thing, because she gives Derek the group date rose for reassurance. Alex is flabbergasted that Derek would want a pity rose, but Derek is happy to take it.

Second Date: It’s hard to know whether JoJo likes Robby for his Good Hair or his Matthew McConaughey impression, which he does when he gets his date card. They drive around Punta del Estes, eat some sandwiches, and eventually jump off a cliff together because that’s what marriage is all about — taking risks, cliff diving and making out in the water while producers figure out a way to fish you out of the ocean. Later, Robby told JoJo that his best friend died in a car accident, so he doesn’t hold back on love anymore. He tells her he loves her, she says “thank you,” but is happy to give him a rose for his effort. Hey Robby: TOO SOON.

The Cocktail Party: Before JoJo arrives at the party, Fake John Krasinksi (a.k.a. Derek) decides to pull Robby, Alex, Jordan and Chase aside to accuse them of being a clique and making him feel bad. Alex rolls his eyes so hard he may have called for a medic, while Jordan just shakes his head, telling Derek: “It’s petty and a non-issue.” Then Chris Harrison comes to deliver the five words he was flown to Uruguay to perform: “There is no cocktail party.”

The Rose Ceremony: Fake John Krasinksi, Jordan and Luke get the first rose, followed by Chase, Alex and James Taylor. The final rose goes to Wells. That means Grant the firefighter will have to go back to rescuing kittens in trees, the Erectile Dysfunction Expert will go back to writing Viagra prescriptions, and the men will now have to pay for haircuts because Vinny was sent packing. 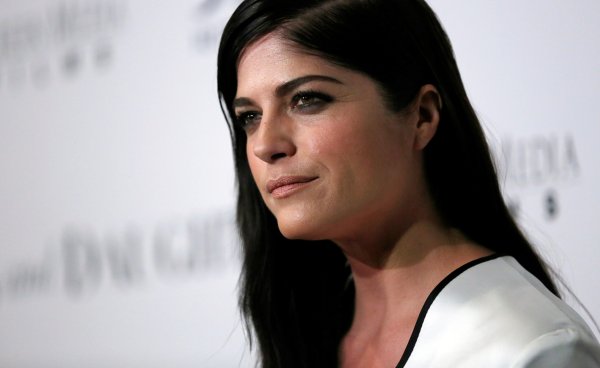 Selma Blair Removed From Airplane On A Stretcher
Next Up: Editor's Pick