Alicia Keys on World Refugee Day: 'If We Don't Speak Up, We're Part of the Problem'

With two decades in the music industry and 15 Grammy awards to her name, it could be easy to overlook Alicia Keys‘ philanthropy work. But the singer, 35, has proven that she’s as invested in making a positive change on both a local and global scale as she does about making music.

To wit, Keys and her organization We Are Here recently teamed up with CARE, Oxfam, and War Child to make a short film for World Refugee Day, titled Let Me In, which is set to “Hallelujah,” the latest single from her upcoming album.

The film flips the script on Western ideas of refugees, by placing the refugee crisis in Los Angeles, with thousands of Southern California residents seeking refuge by crossing the border of Mexico; the narrative follows Keys’ character’s struggles to bring her family to safety on the other side.

To celebrate the premiere of Let Me In on World Refugee Day, we sat down with Keys to talk about the film, her music and how she stays grounded in a “noisy world.”

TIME: What motivated you to get involved with Let Me In?

Alicia Keys: All the great artists that I’ve ever loved — like Nina Simone and Marvin Gaye and John Lennon — have all used art to talk about what’s happening in the world. I’ve found it to be powerful and brave and an incredible way to express the truth. With ‘We Are Here,” it addresses the inequalities and the injustices in the world.

What drew you to the refugee crisis specifically?

The refugee crisis is huge. It’s one of the biggest human crises of all time, ever. It’s unbelievable that there are 60 million people that are displaced from their homes. The average time that people spend in a camp is 10 years, at least — like whoa! Using one of the songs off my upcoming album, “Hallelujah,” for the film was really important to me because it’s such an interesting way to see it and really shows how if we put ourselves into their shoes, how would we feel if it was happening to us?

The other really poignant thing is when we think about how refugees, we need to think about how they are people with careers, kids, mortgages, homes, dreams, just like us. If this happened to me, to you, to your sister, brother, cousin, it made it so personal. Flipping the perspective like that, it’s so powerful to think about how we would think about it if it were us.

In the film, you play a mother who’s trying to get her children to safety. How has your motherhood affected your connection to this project?

I imagine if my boys had to live through that—so many of these children, all they’ve ever seen is war, for as long as they’ve been alive. And then they’re displaced on top of that. Definitely having children and thinking of them having to live through that, not only that experience but potentially the war, it definitely made it all that more devastating.

Besides this project, you recently wrote an essay for Lenny that went viral. In it, you talk about why you’ve chosen not to wear makeup lately. What inspired that decision?

I realized that I started to feel uncomfortable if I didn’t have on makeup and then it became a metaphor for the fact that I cared so much about other people’s opinions of me that it made me doubt who I am, my original self. Lightening up on the makeup and just being more conscious about who I am, being more raw, that also was a metaphor for the music. I’ve come to a place where I’m really comfortable being really raw and vulnerable and actually challenging myself to be more so—to learn about myself and undo some teachings that I’ve picked up along the way.

But this whole makeup thing is absolutely not about the makeup. You have to do what feels good to you; you’re beautiful whichever way you choose to express yourself. The point of that, and what I love about it, is finding what makes you happy, what makes you comfortable. Asking yourself, “do we do things because we think other people are going to judge us if we do it or don’t do it? Or do we do it because we really feel good about what we’re choosing to do?” That goes way deeper than makeup—that has to do with our behavior, our actions, what we say, how we say it, how we choose to express ourselves, the physical, the emotional, the spiritual.

I think one of the things that women really identified with your essay was the idea of maintaining authenticity. How do you keep yourself grounded?

It is really hard, because everywhere you look, someone’s telling you who to be or how to behave or how to act or whatever the case is. It’s a really noisy world. We’re in a world where we’re looking to be liked. We’re looking to be validated. Staying grounded and checking in with how I am with myself is constant work. Believe me! One thing that’s helped me a lot is my gut instinct—do you get the funny feeling in your stomach or do you get the relaxed, comfortable feeling in your stomach? And when you get that funny feeling, you should pay attention to that. So I believe in the gut check.

As far as staying grounded, I’ve been learning a lot about meditation and chanting and just time for myself, even if it’s just 10 minutes in the morning. I find that that space and that time to be quiet has really been very strengthening. It’s tricky, man. It’s not an easy world to navigate, it’s not an easy life to navigate. Especially when as women we are so powerful and we have so much to offer and to create. We have so many beautiful emotions that we must check into and tap into and use—our sensuality, our intelligence. All of it is so powerful and that’s the interesting part to figure out.

Your career spans two decades. What’s changed since you released your first album? How do you think you’ve changed?

The way that people interact has changed. The kind of closeness between artists and fans has been completely revolutionized. The music has totally changed. I think it’s going to continue to change because that’s what’s meant to happen. I think how I’ve changed is discovering balance a lot more, discovering myself, and seeing how I can use art to be a good conversation starter for all the things we’re going through as human beings. I love that so much—there’s so much to talk about, and deal with and handle and look at. Finding that place has really been a part of the journey.

You have an album coming out soon and recently released your latest single from it, “Hallelujah.” What else can we expect from you?

I’m just looking to continue to strengthen myself and be a voice that offers other thoughts, opinions, possibilities, perspectives. I definitely look to be an artist who really has something to say. I think we are in such a difficult time in the world. I think we’re all feeling it on so many different levels. We feel the pressures, we feel the frustrations, we feel the devastation, we feel the confusion. There’s a lot to work through and I want to continue to be somebody who creates a dialogue for that release, talk about and find the next way forward instead of just feeling like we have to accept what’s going on or we can’t speak up. For me, I think if we don’t speak up, we’re a part of the problem. We have the power to do so much and we sometimes forget it because we don’t see enough examples of how it’s actually working. 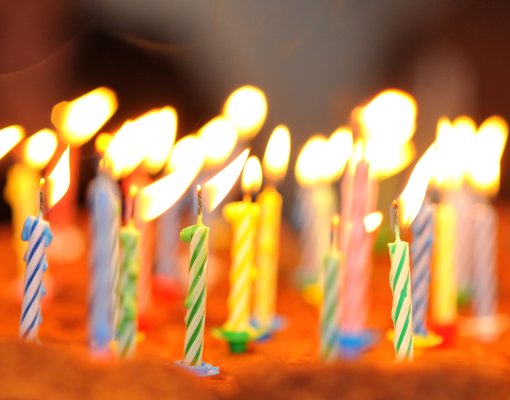 Here's a Germ-Free Method for Extinguishing Birthday Candles
Next Up: Editor's Pick