The leader of Thailand’s ruling military junta has warned so-called “red shirts” that they must not set up centers to monitor for electoral fraud when the country goes to the polls to approve a new constitution on Aug. 7.

The United Front for Democracy against Dictatorship, whose members traditionally wear red and support the exiled former prime minister Thaksin Shinawatra and his family, say the planned monitoring centers will not be political.

General Prayut Chan-ocha, who styled himself prime minister after staging a bloodless coup in May 2014, says the centers would constitute political gatherings, which are barred under laws enacted by a military-appointed parliament, according to the Bangkok Post.

“I have ordered authorities to consider taking legal action on this issue,” Prayut told reporters, according to the Post. “I’m asking them [the red shirts] to think about the country’s situation.”

Thais are to vote on whether to accept a new charter, which critics say will entrench the military’s power. The generals have imposed rules banning campaigning on the constitutional plebiscite, both for and against. 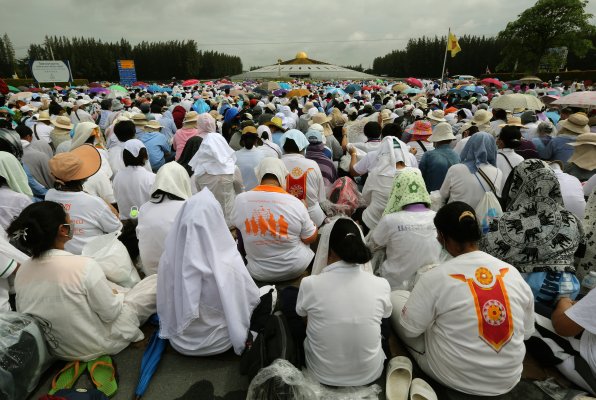 Arrest of Thai Sect Leader Blocked by Followers
Next Up: Editor's Pick