Braving the stifling summer heat, several hundred refugees marched through Hong Kong’s central district Monday to mark World Refugee Day and to demand greater rights for the 11,000 or so asylum seekers living in the territory.

Dressed in red T-shirts and carrying banners that read “Justice for Refugees,” and “Human Rights, Not Racism,” the throng of people walked from the central business district to the headquarters of the city’s Immigration Department a few kilometers away. They hailed from all over Africa, the Middle East and Asia.

While they wait for their claims to refugee status to be assessed — a process that can take more than a decade — asylum seekers in Hong Kong cannot work and must instead survive on the equivalent of $190 and $150 in rental and food allowances respectively. That’s just over $10 a day for everything — in one of the world’s most expensive cities, where the tiniest and dingiest rooms start renting $400 a month. The handouts are barely viable.

Francis, 44, is an asylum seeker from Uganda who arrived in Hong Kong seven months ago. He says he fled his home country because he was in danger because of his political views and work with a children’s foundation that helped LGBT youths, among others. Homosexuality is illegal in Uganda and gay sex or living in a same-sex partnership is punishable with life in prison.

For Francis, who was educated in Canada and holds a bachelor’s degree, life in Hong Kong is bitterly frustrating. “I sleep, I eat, I sleep, I eat, that’s all you can do,” he tells TIME. Though he would like to study more, he says the government won’t allow him, and the prospect of waiting for so long, uncertain of whether his claim will be approved, is not one he relishes.

“Why should I waste 10 years of my life living in limbo?” he says.

Out of nearly 9,000 refugee claims made since 2009, Hong Kong has approved just 52. Two years ago, the government overhauled the screening process for those claiming asylum, taking the process out of the hands of the U.N. refugee agency (UNHCR). The aim was to consolidate screening, but refugees said the system has become “inefficient” and “discriminatory.”

Without the ability to work, refugees spend their days sleeping, loitering, or looking for food. Living in such uncertainty takes its toll on their mental health, says Peter Maina, a refugee from East Africa and secretary general of the Refugee Union that organized the march, “at night, you cannot sleep because … you are worried about your future.”

Maina says it’s “critical” that refugees be given the right to work, as being unable to contribute to society “you become someone who is like a pest,” he says.

“It reduces you into a beggar. You know you are a normal person, you are capable and can work and contribute, but you’re not given the opportunity.” According to Maina, some refugees start dealing drugs or resort to prostitution or stealing and become trapped in a cycle of crime.

And attitudes to refugees in Hong Kong have recently taken a turn for the worse. Reports from politicians and media outlets describe so-called “bogus refugees” entering Hong Kong to abuse the asylum system. Refugees have been blamed for an uptick of crime, and one party has reportedly advocated deporting “fake refugees” and opening a border camp. Some lawmakers are even calling for the city to repeal the U.N. torture convention.

The negative atmosphere toward those claiming asylum has spurred a coalition of NGOs to issue a statement calling for an end to discrimination against refugees and ethnic minorities.

“We acknowledge that concerns have been raised following an increase in the number of protection claimants in Hong Kong and apparent abuses of the system. These concerns must be listened to, but matters must be kept in perspective, and international law should be upheld,” the statement said, adding that instead of discrimination, the delays and inefficiencies of the screening process should be reduced. “There is nothing remotely like a crisis and there is no need to search for dramatic measures.”

There are now 65 million people who are displaced worldwide, the most there has ever been since records began, according to the UNHCR. Every day, 34,000 people on average are forcibly displaced. Europe is struggling to handle a migrant crisis, with 1 million refugees and migrants making the perilous crossing from Turkey across the Mediterranean last year, in the hopes of a better life in Europe. Many thousands have perished on the journey.

As the crisis deepens, attitudes towards migrants worldwide have soured. The U.N. refugee chief says a “climate of xenophobia” has gripped Europe amid reports of refugees being shot and tear-gassed at European borders, asylum centers being torched and the rise of far-right groups. This week, the U.K. prepares to vote on whether to remain part of the E.U., and immigration is a central theme for the “Leave” campaign.

Though the refugee situation in Hong Kong is small fry compared with Europe’s, there are voices in the small semiautonomous Chinese territory that are trying to help, as well as various NGOs striving to provide assistance. One such local project called We Are Here aims to raise awareness of the refugees’ plight through art and film. Run by artist Katherine Sparrow and filmmaker Polly McGovern, the project offers a way for the public to get to know the refugees in order to change perceptions of them.

“We want to show that refugees can bring positive influences to Hong Kong,” Sparrow tells TIME. “All they want is to be safe and allowed to start a new life.”

For that to become a reality, the refugees on the march say they need to be able to work, and that their claims should be processed faster. “We have doctors, we have lawyers, we have journalists,” says Maina. “There are professional people who can participate in society.” 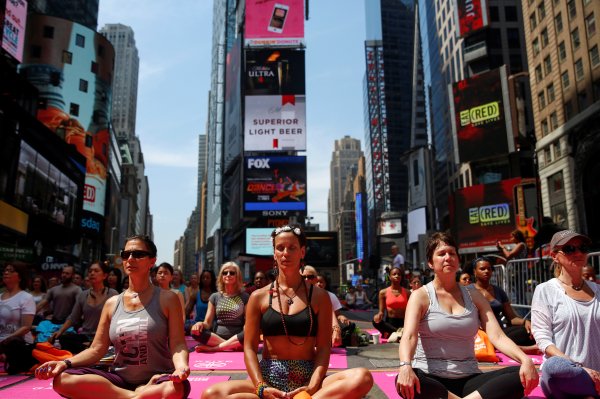 Namaste. Today Is Yoga Day
Next Up: Editor's Pick