Bangladeshi police say they have killed a senior figure of an Islamic militant group involved in the killings of secular activists and bloggers.

Amid a large-scale crackdown on suspected militants following a spate of murders of liberal activists and minorities, the Dhaka Tribune reports that a man known as Sharif, who was responsible for training in the banned group Ansarullah Bangla Team, was killed in a gunfight in the capital, Dhaka, on Sunday.

Police claim Sharif, whose organization is believed to be the local affiliate of al-Qaeda in the Indian Subcontinent (AQIS), took part in the murders last year of Bangladeshi-American secular blogger Avijit Roy and fellow blogger Niladri “Niloy” Chatterjee, as well as in the killing of a university student.

The deaths are among at least 20 similar killings since 2013, in which the victims are usually hacked to death in broad daylight. AQIS and the Islamic State of Iraq and Greater Syria have separately claimed responsibility for many of the attacks.

A Hindu monastery worker, a Hindu priest, a Christian walking home from Sunday prayers, and the wife of an antiterrorism police officer have all been slain in Muslim-majority Bangladesh this month alone, sparking authorities to roundup thousands of suspects. 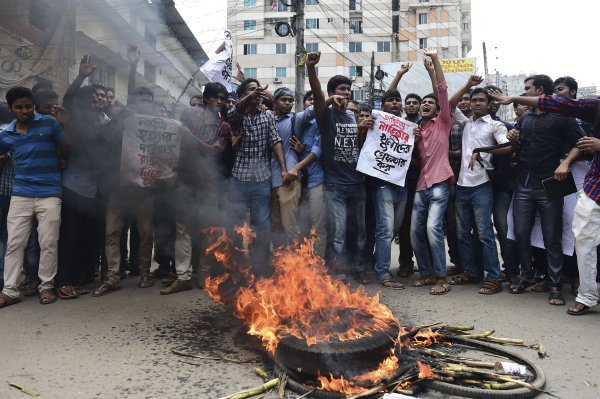 Why Terrorism Is on the Rise in Bangladesh
Next Up: Editor's Pick