This Is What Americans Used to Consider Obscene

What’s an obscenity? The question is hard, partly because the answer keeps changing. Forty-three years ago Tuesday, the landmark U.S. Supreme Court case Miller v. California established the so-called “Miller test” for obscenity. According to the ruling, which is based on “the average person, applying contemporary adult community standards,” any matter that “lacks serious literary, artistic, political, or scientific value” and “taken as a whole, appeals to prurient interests” is obscene, and thus not protected by the First Amendment.

The Miller test was not the first time American courts had ruled on obscenity. In fact, it built directly on Roth v. United States (1957), which said had that obscene material was “utterly without redeeming social importance.” But, while prudishness is often associated with the pilgrims, the most consequential American obscenity laws didn’t get passed until late in the game.

At first, communities mostly regulated their own behavior. The tide began to change in the mid-19th century, notably with the 1873 Comstock Act, which prohibited mailing “obscene,” “lewd,” or “lascivious” material, including materials about sex education. The most colorful obscenity disputes took place in the periods right around the turn of the 20th century as “new technology, films and rapidly expanding press were breaking down the barriers between private and public,” argues Leigh Ann Wheeler, a professor of history at Binghamton University and author of How Sex Became a Civil Liberty. “That made people coming out of the Victorian era — who had firm boundaries between public and private — nervous.”

Nowadays, there are fewer obscenity prosecutions and most of the concern is about child pornography, says law professor Kevin Saunders, author of Degradation: What the History of Obscenity Tells Us About Hate Speech. So TIME may have been ahead of its time in 1974 when, after Miller v. California, the magazine predicted: “The national mood could be pointing to an uncensored future…in which consenting adults will be free to decide for themselves what they will read and see.”

But if there’s anything that can be said about the history of obscenity in America, it’s that what people want to “read and see” evolves. Here are just a few examples that prove the point:

The first short films were clear targets for anti-obscenity activists, and this 21-second clip of what the Library of Congress calls the first woman to be in front of an Thomas Edison movie camera is “one of the first ones that we think was banned,” says Wheeler. Its star, Carmencita, was a Spanish Vaudeville dancer and a fixture at Koster & Bial’s Music Hall in NYC in the 1890s. John Singer Sargent even painted her once. Essentially, viewers were shocked by the way she occasionally tugs at the bottom of her skirt and how the crinolines underneath are visible. Wheeler adds, “Her dress was also a little shorter than a dress was supposed to be, and it showed her ankles.” According to some accounts, the Newark Evening News reported that a New Jersey kinetoscope parlor had to remove the footage and replace it with The Boxing Cats after state senator James A. Bradley complained such ankle showing was inappropriate.

In what is considered to be the “first movie kiss,” actors May Irwin and John Rice reprised the smooch from their Broadway comedy The Widow Jones for a film shot by Thomas Edison’s Vitascope cinema projector. Even though most of the 19-second clip just shows the two of them talking and nuzzling, it is said to have been “banned in many places,” according to Wheeler, and garnered numerous negative reviews, like “The spectacle of their prolonged pasturing on each other’s lips was hard to bear.” Some reportedly called for police intervention.

Censorship didn’t just apply to film, of course. While the two examples above seem innocuous today, one of the most famous examples of U.S. obscenity law came from a book that can be plenty raunchy but is also full of artistic merit. James Joyce’s Ulysses was not legally available in the U.S. until more than a decade after it was published. As a 1933 TIME article described the series of events that led to United States v. One Book Called Ulysses:

Manhattan federal judge John M. Woolsey ruled in 1933 that even though the book has some graphic passages, it’s “not pornographic” or obscene “in its entirety.” His decision was “one of the more important foundations of the legal framework” that would help obscenity laws evolve, says Whitney Strub, author of Obscenity Rules: Roth v. United States and the Long Struggle over Sexual Expression. 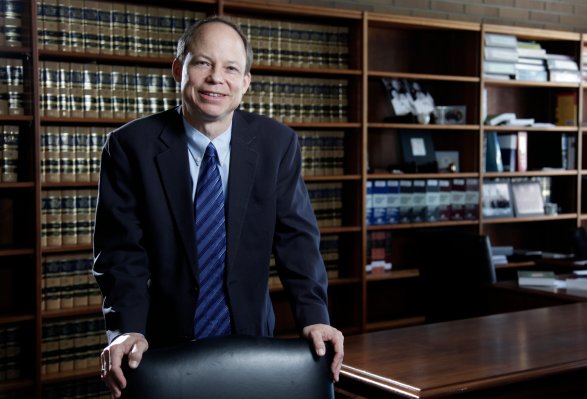 Judge in Stanford Sentencing Removed From Sex Assault Case
Next Up: Editor's Pick