Susan Wojcicki: Refugees Are Trying to Escape Terror—Not Create It

In just three days in May, some 700 refugees are feared to have died in shipwrecks. I find those deaths especially heartbreaking; my father could have been one of them.

In 1949, my father was 11 years old when he, along with my uncle and grandmother, boarded the Swedish coal tanker, the S.S. Viking. My grandfather was a leading opposition figure in Poland, where he was being surveilled and harassed by the Communist Party. When the climate became too risky, he was determined to escape with his family. Unfortunately, the S.S. Viking would only take three people on board. My grandfather stayed behind while his family sailed away, smuggled in the hold of the ship. He would live out the rest of his life in Poland.

For two days my family was at sea, maintaining complete silence until they reached international waters to avoid detection. Eventually they reached safety in Stockholm, and later in the United States. At any point, they could have been discovered, detained, or worse, turned back. But Congressman John Dingell Sr. of Michigan heard of my family’s story—about their difficult journey; about the fact my grandfather had fought Nazis as a soldier and resisted Communists as a politician—and wrote a special bill to grant my family permanent residence in the U.S. The bill was passed by Congress in 1951 and signed into law by President Harry Truman.

My family and millions of other refugees have been welcomed into the US and Europe since World War II. But today, that willingness to open our borders to meaningful numbers of refugees is almost nowhere to be found. The United States and several other European countries have put in rigorous screening processes to ensure the highest standards of security when admitting refugees, but still the appetite to welcome more into our borders remains low.

The current state of refugee populations isn’t just a crisis—it’s one of the great catastrophes of our time. Today, the U.N. Refugee Agency estimates there are about 60 million refugees who have fled their countries in search of peace, over one-third from the Middle East. An entire generation of people are fleeing persecution and violence, only to end up in camps with little hope of resettlement or a decent education for their children. That is, if they don’t perish during their journey.

Despite what some have argued, these refugees are not terrorists seeking to inflict harm—in many cases they are families escaping terrorism. They are families who, like my family, risked their lives in hopes of offering their children a better future.

However you feel about the media’s coverage of the refugee crisis, one thing is certain: far more airtime has been granted to those who denounce refugees than to those who humanize them.

On this World Refugee Day, I’d ask you to spend 10 minutes putting a human face on the current refugee crisis.Watch John Green visit the Zaatari Refugee Camp in Jordan and listen to a mother tell him: “I want you to picture yourself sitting in your home and an explosive barrel falls on top of your roof and after the fog is gone you check your kids to see if they’re alive.”

Watch VICE News and see the tears of joy flow from the eyes of African refugees after their raft is narrowly rescued at sea by Doctors Without Borders.

And if those images are too raw, then this Saturday watch the Orchestra of Syrian Musicians, which had been scattered by war, reunite to perform a live concert celebrating a proud culture that refuses to be silenced.

Watch these things and then decide what posture you want your country to take to those in desperate need: folded arms or an outstretched hand?

Seventy years ago, America outstretched its hands to my father and his family. Thanks to that gesture my grandmother was able to establish a thriving cultural exchange between Poland and the US in decades of work at the Library of Congress. My father became a leading particle physicist and twice chaired the Physics department at Stanford. My middle sister became one of the leading childhood obesity researchers in the U.S. And both my younger sister and I have become CEOs of technology companies here in Silicon Valley.

We are just one family that has been blessed by America’s willingness to give shelter to huddled masses. But millions more families sit stranded in war-torn regions throughout the world, live transitionally in refugee camps far from their homes, and risk everything to cross treacherous waters and dangerous borders. Whether we accept these refugees into our societies or not, we should afford them the dignity to be seen for what they are: human beings in search of a better life for their children.

Susan Wojcicki is CEO of YouTube. The author prepared this piece in her personal capacity. The opinions expressed in this article are the author’s own and do not reflect the view of YouTube or Google. 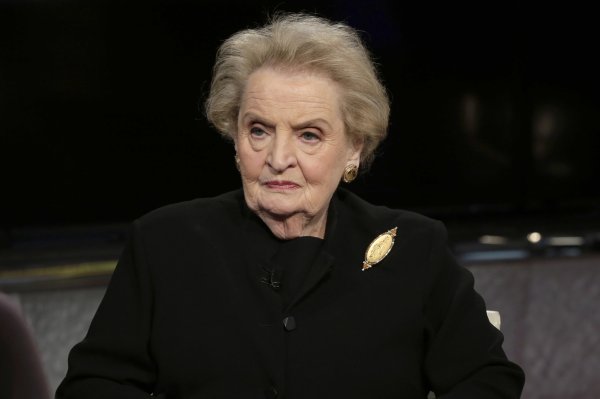 Turning Refugees Into Enemies Is Self-Defeating
Next Up: Editor's Pick