When it comes to raising money, Donald Trump is morphing into the very kind of bootlicking presidential candidate he’s insisted — over and again — that he wasn’t, isn’t and wouldn’t become.

On one hand, it’s hard to blame Trump.

The real estate mogul, after all, is sprinting headlong into the buzz saw that is Hillary Clinton’s big-money machine — a machine composed not only of her own moneyed campaign, but allied political committees, super PACs and nonprofit groups that are together raising hundreds of millions of dollars, sometimes from billionaires (such as George Soros) who are even more billionaire-y than The Donald.

Consider that last week alone, Team Clinton aired about 3,400 ad spots — mostly eviscerating Trump — on broadcast and national cable television, according to a Center for Public Integrity analysis of data from media tracking firm Kantar Media/CMAG. The Trump campaign aired no such TV ads at all, while a supportive super PAC managed fewer than 100.

On the other hand, Trump’s turn toward fueling his White House ambitious with cash from special interests and political megadonors undermines what’s been one of his most effective marketing messages: that he’s beholden to no one and can’t be bought because he’s a rich man who’s self-funding his campaign.

Now Trump is no longer spurning super PACs and eschewing tony private fundraisers tailor made for 1 percenters. Rather he’s tolerating, if not embracing, the post-Citizens United era of cash-flush politics that, until recently, Trump considered anathema to his largely anti-establishment presidential bid.

That may surprise some likely voters, who in a recent Center for Public Integrity/Ipsos poll ranked Trump well ahead of Democratic rival Hillary Clinton — an avowed campaign finance reformer — on the question of which candidate, if elected president, would do the most to make elections less reliant on big money.

Trump’s campaign refused to answer questions about how Trump’s attitude toward political money has shifted. But an analysis of Trump’s statements on the matter demonstrates how it most certainly has.

Trump on self-funding his presidential campaign:

“You know the nice part about me? I don’t need anybody’s money.” — from an interview in August 2015 in Iowa

“I don’t believe I have been given any credit by the voters for self-funding my campaign, the only one. I will keep doing, but not worth it!” — from a tweet Feb. 2, 2016

Trump is not exclusively self-funding his campaign.

Make no mistake: He has personally invested an eight-figure sum into his push to Make America Great Again — more than $43 million and counting, according to Trump’s most recent round of federal campaign finance disclosures.

But almost immediately after announcing his presidential bid, Trump began passively accepting contributions from his growing legion of supporters. The dollars began adding up, and as May arrived, federal records indicate Trump’s supporters had together given his campaign about $14 million.

“I mean, do I want to sell a couple of buildings and self-fund? I don’t know that I want to do that necessarily, but I really won’t be asking for money for myself, I’ll be asking money for the party,” Trump said during an interview on MSNBC’s “Morning Joe” on May 4.

The same day, in an interview with the Wall Street Journal, Trump said that he’d personally “be putting up money, but won’t be completely self-funding” as the campaign moved forward.

Trump’s prediction that he’d dump $600 million of his own money into his campaign therefore seems remote.

Trump in early May hired private investor Steven Mnuchin as his national finance director. On May 25, Trump’s campaign formally tethered itself to the GOP establishment. It teamed with the Republican National Committee and 11 state-level Republican Party committees to form Trump Victory, a joint fundraising committee that may collect large contributions from wealthy donors and spread the money among its member committees.

He followed it up with a tony fundraising affair in Boston, with lunch and a photo with Trump selling for $10,000, according to the Boston Herald’s Jennifer Miller. Trump today is in the midst of a fundraising swing through Texas.

But Trump has even bigger political paydays in mind.

“I really like the Koch Brothers (members of my P.B. Club), but I don’t want their money or anything else from them. Cannot influence Trump!” — from a tweet July 29, 2015

“I wish good luck to all of the Republican candidates that traveled to California to beg for money etc. from the Koch Brothers. Puppets?” — from a tweet on Aug. 2, 2015

“Little Marco Rubio, the lightweight no show Senator from Florida, is set to be the “puppet” of the special interest Koch brothers. WATCH!” — from a tweet on Feb. 28, 2016

Today, Trump thinks so little of the Koch brothers’ money that the Trump campaign recently requested a meeting with Charles Koch’s political lieutenants.

That’s according to Charles Koch himself, a Trump skeptic who on June 8 toldUSA Today’s Fredreka Schouten: “We are happy to talk to anybody and hope they understand where we’re coming from, and they will have more constructive positions than they’ve had.”

When Schouten asked Koch whether Trump was fit to be president — Koch has flirted with openly opposing Trump and even supporting Democrat Hillary Clinton — he replied: “I don’t know the answer to that.”

The Kochs’ massive political fundraising network, which says it plans to spend $750 million on politics this election cycle, could very well avoid the presidential race altogether. The Kochs have already declined to contribute money to the Republican National Convention next month in Cleveland.

“Sheldon Adelson is looking to give big dollars to Rubio because he feels he can mold him into his perfect little puppet. I agree!” — from a tweet on Oct. 13, 2015

Adelson never did intervene in the Republican presidential primary — in contrast with his tack in 2012, when he backed Newt Gingrich, and then Mitt Romney, with tens of millions of dollars.

Rubio’s Adelson windfall never materialized, and the junior U.S. senator from Florida quit the race after Trump thumped him in his home state’s primary.

By February, Adelson signaled to colleagues that he was open to supporting Trump, even if he wasn’t yet ready to endorse him.

And in early May, as the White House hopes of Cruz and Kasich finally flamed out, Trump and Adelson met again.

On May 13, the New York Times reported that Adelson said he’s willing to contribute more than $100 million to boost Trump’s candidacy.

“An incredible honor to receive the endorsement of a person I have such tremendous respect for. Thank you, Sheldon!” Trump tweeted that day.

“This whole Super PAC scam is very unfair to a person like me who has disavowed all PAC’s & is self-funding.” —from a tweet on Oct. 26, 2015

“All Presidential candidates should immediately disavow their Super PAC’s. They’re not only breaking the spirit of the law but the law itself” — from a tweet on Oct. 26, 2015

“I see Marco Rubio just landed another billionaire to give big money to his Superpac, which are total scams. Marco must address him as ‘SIR’!” — from a tweet Oct. 30, 2015

“They’re in total cahoots with their [super] PACs, which they’re not allowed to be. They’re all in total cahoots. They put their friends in there. One good thing about me: I’m not.” — to the Washington Post in October 2015, regarding other presidential candidates

“These Super PACs are a disaster by the way, folks, very corrupt. It’s going to lead to a lot of disasters … There is total control of the candidates. I know it better than anybody that probably ever lived … I know the system far better than anybody else, and I know the system is broken. I’m the only one up here that’s going to be able to fix that system because that system is wrong.” — at a Republican presidential debate on March 10, 2016

Trump has effectively embraced these “total scams,” squelching his criticism of them.

It’s led by Tom Barrack, chairman of movie studio Miramax and the same man who feted Trump at a multi-million-dollar fundraiser May 25. Barrack this month told CNN’s Erin Burnett that he’s already secured $32 million in financial commitments for his super PAC. If true, the figure would rival what Trump himself has so far given to his presidential campaign.

To date, Rebuilding America Now has sponsored more than $1 million worth of anti-Clinton ads, according to federal disclosures. By law, it isn’t required to release the names of its donors, or the amounts they’ve given, until mid-July.

Formed in February as “TrumPAC” — it changed its name under FEC pressure— the group has recently sponsored hundreds of thousands of dollars worth of pro-Trump TV and digital advertisements as well as promotional phone calls.

And the biggest Trump-backing super PAC of all could be one that doesn’t yet exist: Adelson is now considering funding a pro-Trump super PAC.

Earlier in the presidential race, Trump’s campaign sent cease-and-desist messages to some such groups that traded on his name.

It also wrote letters to the FEC, systematically disavowing supposedly pro-Trump super PACs, many of which have raised little or no money and largely appear to exist only on paper.

But the Trump campaign hasn’t written such messages — not that they were binding in the first place, as super PACs don’t need the candidates they support to authorize them — since early May.

“I am not controlled by my donors, special interests or lobbyists. I am only working for the people of the U.S.!” — Facebook post on Sept. 5, 2015

As with megadonors, Trump is now cozying up to professional government influencers.

Trump’s campaign itself is run in part by Paul Manafort — one of the subjects of a 1992 Center for Public Integrity report, “The Torturers’ Lobby,” which detailed how American lobbyists aided foreign governments that violated their citizens human rights. Manafort has since worked for a variety of other foreign interests as an influence broker and political consultant.

Earlier this month, the Trump campaign asked top defense industry lobbyists to travel to New York City and brief Trump personally, which they did.

And lobbyists themselves are beginning to band together to raise cash for Trump — something to which Trump has not objected.

The ultimate question is this: Will Trump’s financial flip-flopping alienate the anti-establishment voters who help him clinch the Republican presidential nomination?

Trump has less than five months to convince them that they haven’t been misled — if they care in the first place. 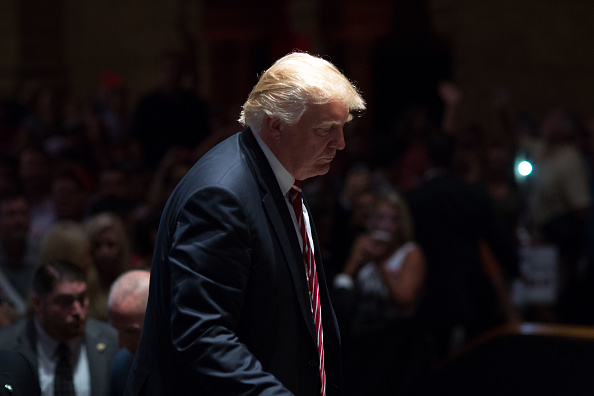