The Murder of a Pro-E.U. MP Is One More Sign of a Darkening Europe

The founding values of the European Union have had little place in the debate ahead of the June 23 referendum on British membership. When the E.U. rose from the ashes of World War II, the conviction was that Europe would be stronger and safer if its economies were interdependent, its borders fluid and its people part of something bigger than one nation. Such transnational values, its founders believed, would prevent a return to war and the dark days of the past.

But neither the ‘Leave’ nor ‘Remain’ campaign in the upcoming Brexit referendum will tell you that. Big dreams, it seems, don’t make good soundbites. Instead the debate has largely been driven by hyperbolic claims about migrants, borders, and a loss of British identity, contributing to a toxic political climate which some reports suggest may have played a part in the shocking killing of pro-immigration MP Jo Cox as she met her constituents on June 16.

The rancor in Britain reflects the mood across a continent which has lurched from one mismanaged crisis to the next, extinguishing public trust and leading to soul-searching about whether the E.U. needs to rediscover its liberal values or abandon them—if it can survive at all. “The debate rarely speaks to or about the Europe of values, democracy, the rule of law, equality,” Emily O’Reilly, the E.U. ombudsman, told a recent conference. “For many citizens they are intangible qualities, difficult at times to be felt as they go about their daily lives.”

Given the events of the past few years, Europeans would be forgiven for abandoning hope in the utopian dreams of the post-war era, when human rights and the respect for the dignity of all were considered vital building blocks for a safe and secure future. These are just a few of the images to come out of the E.U. in the last few years: anti-austerity protesters in Spain beaten by truncheon-wielding police; child refugees teargassed in Hungary; neo-Nazis marching in Germany; a newborn baby being washed from a bottle in the mud and dirt outside a tent in an overcrowded migrant camp in Greece.

First the Eurozone crisis caused unemployment to soar and quality of life to plummet as nations grudgingly accepted E.U.-imposed austerity programs. Then the arrival of around a million souls seeking sanctuary from war and poverty last year sent Europe into a tailspin from which it has yet to recover, challenging the open borders that are a pillar of the E.U.

Terrorist attacks have killed dozens of people in France and Belgium in the past year, adding to a climate of fear and suspicion across the continent. With woes piling up, people question whether the E.U. could survive the heavy blow that Brexit would inflict. Donald Tusk, President of the European Council, has warned that a ‘Leave’ vote could spell “the beginning of the destruction of not only the E.U. but also of western political civilization in its entirety.”

Stefan Lehne, a visiting scholar at the Carnegie Europe think-tank, believes that the problems began when the E.U. outgrew its ideological roots. “For a long time, people went along with this big overarching narrative of peace and prosperity,” he says. “But when the European integration started to enter into areas which were very relevant to people’s lives—like internal affairs, border questions, migration issues, common monetary policy—many people didn’t like it.”

When people started to take peace and prosperity for granted, the old narratives faded away. Then when uncertain times returned, citizens looked for new narratives. The result has been a surge in support for far-right, populist and Eurosceptic parties, including the U.K. Independence Party (UKIP), the loudest voice urging people in Britain’s to leave the E.U.

On the same day that Cox was killed, UKIP’s leader, Nigel Farage, stood in front of a new campaign posted showing a queue of refugees waiting to cross the border in Croatia last year: “Breaking Point” warned the red letters above the forlorn figures.

Unfortunately, rather than challenging some of the xenophobic and racist rhetoric espoused by various parties, mainstream politicians shifted their policies further towards the extreme, and further away from the goals of the E.U.’s founding fathers. Borders were closed to people in need of sanctuary, calls for solidarity from the countries hit worst by the Eurozone crisis were met by steely pragmatism and the E.U. institutions struggled to uphold their own laws in the face of increasingly inward-looking member states.

Whichever way Britain votes on June 23, the E.U. is undergoing a transformation, and it needs to find a new vision to meet the challenges of today. Putting people’s basic rights at the heart of the E.U. is not an idealistic and impractical goal. If countries shared the burden of offering homes to refugees, it would prevent the kind of build-up of resentment in a few nations that can derail the entire European project. If policies to boost economic growth took into account the human toll, people would not have to look to fringe parties for answers.

But when governments don’t seem to have faith in the values of the union they proclaim to support, they cannot have any hope of convincing their citizens.

McDonald-Gibson is the author of the new book Cast Away: True Stories of Survival from Europe’s Refugee Crisis 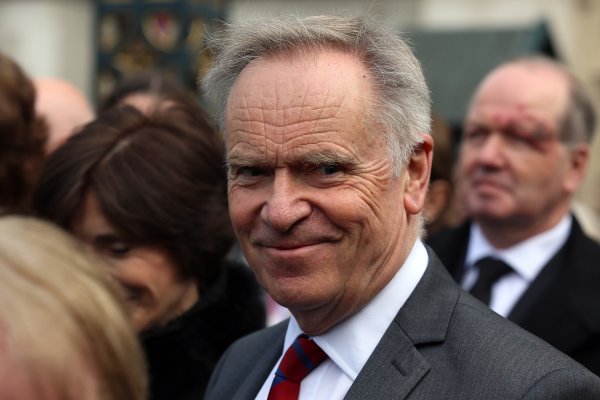 Why I'm Holding My Nose and Voting to Keep Britain in the E.U.
Next Up: Editor's Pick