In comedy, writing isn’t everything. Sometimes it counts for almost nothing. Comedies can be carried along on their spirit, a little like Popeye’s Wimpy being swept into the air by the aroma of a hamburger, made visible in the form of a wispy, beckoning hand.

That’s more or less how Rawson Marshall Thurber’s buddy comedy-crime caper hybrid Central Intelligence hangs together. Kevin Hart plays Calvin Joyner, a guy who was voted Most Likely to Succeed back in high school, circa 1996, but who’s now feeling oppressed by his going-nowhere Baltimore accounting job. Dwayne Johnson is Bob Stone, an old classmate who used to be chubby but who somehow grew and solidified into—well, Dwayne Johnson. Bob suffered a particularly cruel humiliation during senior year, seen in an early flashback; Calvin stuck up for him in a very basic but kind way. Calvin forgot the episode, but Bob never did. As the class’s 20th reunion approaches, Calvin, embarrassed by the rut he’s stuck in, has no interest in attending. But Bob connects with him via Facebook and persuades him to come out for a beer. From there, the new Bob Stone, who looks nothing like the old Bob Stone but who has retained his high-school level of sweet, embarrassing nerdiness—“I’m big into unicorns. So magical, right?”—lures Calvin into an adventure that involves stolen government secrets and a bunch of hotheaded CIA agents.

The plot means nothing: It’s just a kiddie pool in which Johnson and Hart can mess around, a chance for each to revel in the other’s particular mode of controlled craziness. Hart’s personal brand is built on his twitchy, nervous energy. Compact and muscular, he’s a powerhouse of vitality wound tight, like a pop-up snake coiled in a fake peanut can. You can almost see the Brownian motion of his anxiety building up. Part of the joy of watching him lies in waiting for the lid to blow off.

Johnson is taller, broader, sunnier, with an easy drawl and a quick smile. They’re an unlikely duo, a mismatched salt-and-pepper set, but the contrast is goofily splendid. Johnson cools Hart down a bit; Hart pushes Johnson forward ever so slightly, like a jazz drummer goosing the beat. Sometimes—often—Johnson’s Bob will say something that’s totally wrong, as when he eagerly compliments Calvin on how well he looks in a new suit: “You look like a black Will Smith!” Hart’s face crumples as he registers the weirdness of this comment. “I think that might be racist,” he says, “but I’ll take it as a compliment.”

It is racist, probably, but that’s the genius of the joke: Bob’s spontaneous enthusiasm is so genuine that Calvin can’t help but accept it—after all, there are bigger battles to fight. Much of Central Intelligence works that way. Like all good comedies, it’s dotted with things you think you probably shouldn’t laugh at, which only makes them funnier. Director Rawson Marshall Thurber, working from a script he co-wrote with Ike Barinholtz and David Stassen, keeps the story moving briskly, so its flaws pass by in a blur. (Thurber also directed the 2004 Dodgeball: A True Underdog Story, an energetic and inventively silly comedy about everyone’s—or at least just my—least favorite phys ed staple.) The stealth ingredients of Central Intelligence include Amy Ryan as a stern CIA agent—Ryan is a terrific dramatic actress, and it’s fun to watch her cut loose, even as the straight woman, in a comedy. But no one can steal the show from Johnson and Hart. Their dual rhythms, alternately laid back and hyperactive, end up in a glorious and ridiculous kind of syncopation, unicornlike in its rarity and oddness. So magical, right? 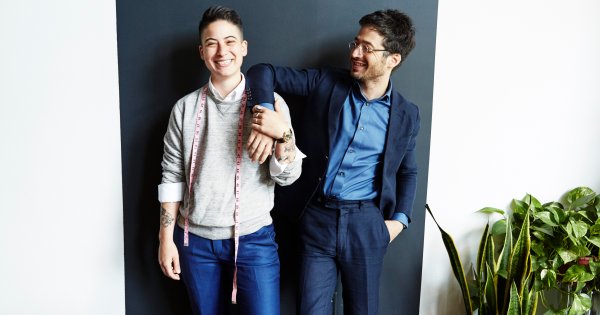 Suited: Inside Brooklyn’s Tailors for Gender Nonconforming Customers
Next Up: Editor's Pick