GQ Magazine just released a feature on the one and only Kim Kardashian West, which has the reality television celebutante candidly spilling the tea on everyone from hubby Kanye West to former friend and future sister-in-law Blac Chyna and even addressing Taylor Swift‘s beef with Kanye West. Seeing as how the interview clocks in at over 5000 words, we’ve rounded up the 10 most memorable (and outrageous) highlights from the revealing article.

Kimye is a match made in heaven: The interview includes a phone conversation with Kanye, who denies that Kim has any faults besides not forwarding e-mails of sketches that designers send her, which is probably the most Kimye problem to have. “All my friends and my sisters say, ‘You guys are so perfect for each other. There’s no one that would want to sit in your closet for hours with you and try on clothes.’ ”

Despite Kanye’s feelings about George W. Bush, Kim still has some affection for the former president: Although Kardashian once identified as a “liberal Republican,” she now identifies as a Democrat and will be supporting Hillary Clinton in the upcoming presidential election. However, her new political allegiances don’t prevent her from professing affection for George W. Bush, someone that her husband once denounced on national television. “I love George, though, I just think he’s cute. Like a cute little president.”

Kim is next-level organized: Described as “frighteningly organized,” Kardashian says she deletes every single text message and e-mail from her phone before bed, unless she needs to respond to it later.

Despite what the Internet would have you believe, she’s Team Blac Chyna and Rob: Kim made sure to relay that the family supports the future Angela Renee Kardashian. “We’re all on board. We definitely see that my brother is happy and getting healthy, and whatever gets him to that place, you know, we’re happy for him. Chyna’s a sweet girl, and I think we all have so many things going on in our lives that we just want my brother to be happy. Has there been so many crazy things that happened? Yes. Is the whole situation, you know, just…? I think people want to feel like we’re all beefing and have this crazy fight, and we’re really not. I think the drama naturally follows us.”

Her neighbors are just as famous as she is: Kim counts Gordon Ramsay and Stevie Wonder as neighbors; in fact, the latter crashed the baby shower that she hosted for Chrissy Teigen and John Legend. Casual.

Kim is the relative breadwinner in the Kardashian-West household: Kim nabbed #33 on Forbes’ highest-paid celebrities list, while Kanye didn’t even make the top 100.

She had an idea about Caitlyn Jenner early on: Kardashian relayed a story of how she walked in on Caitlyn (then Bruce) Jenner wearing women’s clothing in the family’s garage. “I went over to Kourtney’s, and Kourtney was the only person that I told. We had no idea what it meant. So we went and Googled stories and found this, like, Oprah episode of this girl who had gone through a transition. But we still didn’t know a lot.”

Kim “loved” The People v. O.J. Simpson, but she took issue with the portrayal of her and her siblings: While Kim thought David Schwimmer’s portrayal of her father, Robert Kardashian, she didn’t think the series’ interpretation of her and her siblings was accurate. “I think our ages were off and our looks were off…[The show] said [O.J.] tried to kill himself in my bedroom and it was Khloé’s bedroom, not my bedroom.”

According to Kim, Taylor Swift totally approved Kanye’s controversial line about her in his song, “Famous”: “She totally approved that. She totally knew that that was coming out. She wanted to all of a sudden act like she didn’t. I swear, my husband gets so much shit for things [when] he really was doing proper protocol and even called to get it approved…I don’t know why she just, you know, flipped all of a sudden.… It was funny because [on the call with Kanye, Taylor] said, ‘When I get on the Grammy red carpet, all the media is going to think that I’m so against this, and I’ll just laugh and say, ‘The joke’s on you, guys. I was in on it the whole time.’ And I’m like, wait, but [in] your Grammy speech, you completely dissed my husband just to play the victim again.” 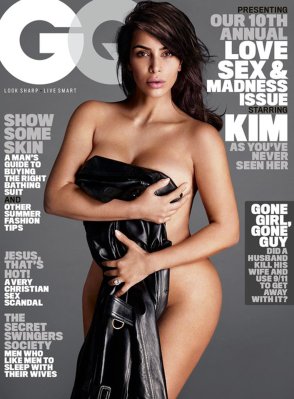