Disability Isn't a Defining Trait in The Fundamentals of Caring

A middle-aged guy and a teenager sit in a diner, debating whether to offer a ride to a young, female hitchhiker they are watching through the window. The older man detects a hint of a crush developing in the heart of his young companion and practices some reverse psychology to get the teen to suggest that perhaps they should be the heroic non-creeps to pick her up.

In this clip from The Fundamentals of Caring, which premiered to a warm reception at Sundance and arrives on Netflix June 24, Paul Rudd and Craig Roberts are just two guys eating lunch on the road, staring out a window at Selena Gomez. There’s no indication that Roberts, who plays Trevor, is in a wheelchair and happens to have Duchenne muscular dystrophy. And that’s exactly how writer-director Rob Burnett, best known as the former executive producer of Late Show with David Letterman, wants it. “Many people say to me what I take as a great compliment,” he says: “By the end we almost forget that Craig is in a wheelchair.”

Debuting just a few weeks after the romance film Me Before You, which was criticized by many people with disabilities for suggesting that some disabled people would be happier if they chose to die, The Fundamentals of Caring takes a different approach. In the film, based on the 2013 novel The Revised Fundamentals of Caregiving by Jonathan Evison, Rudd plays Ben, a man who whose spirit and marriage alike are devastated by the accidental death of his young son. He becomes a certified caregiver and his first client, 19-year-old Trevor, takes great pleasure in making Ben’s life miserable. Seeing an opportunity to get Trevor out of his depressing, TV-addicted routine, Ben suggests a road trip to the cheesy roadside attractions which hold a strange kind of fascination for Trevor, and the two set out on a journey.

You might be tempted to predict the outcome—in trying to help another, a broken man finds that it is he who needs the fixing—and you might be right, to some extent. But The Fundamentals of Caring self-consciously rejects such tidy platitudes, and what healing that does occur, for both Ben and Trevor, takes place in a much more nuanced (and much more foul-mouthed) manner than that of many similar stories.

“A very typical version of this story is the irascible, energetic caregiver comes in and breathes life into the ill or injured,” says Burnett. “But one thing that really interested me in this movie is that both Paul’s character and Trevor are damaged in completely different ways. And neither has any particular interest in helping the other. They do this by accident.”

Burnett credits his cast with warding off the kind of cliché that might accompany such a tale. “I think what a lot of people don’t realize about Paul is that he’s a classically trained actor, but he just happens to be one of the funniest humans on the planet.” He describes Gomez as hardworking and down-to-earth: “Someone of her stature could have easily said they wouldn’t audition—she auditioned three times for the part.” And though Rudd and Gomez may have more recognizable faces than their British co-star, he hopes this film will change that.

Roberts worked alongside Burnett to understand some of the challenges faced by people with DMD, visiting with several people affected by it. Burnett brought in Tracy Seckler, whose son has DMD and who runs the advocacy organization Charley’s Fund, as a sort of “technical adviser.” The most important thing about Trevor, Burnett says, is that “he wasn’t a kid defined by the disease. He was a kid that had the disease. He was funny, he was mean, he was all different things the way a full person could be.”

Burnett explains one of the fundamental challenges of the material, which is that neither of his leading men will ever fully recover from what ails them. “Ben will never get over the loss of his child. Trevor will never get out of the wheelchair,” he says. “And yet there is something very heroic about these two guys who are completely dead, just breathing a little bit of life into each other.” 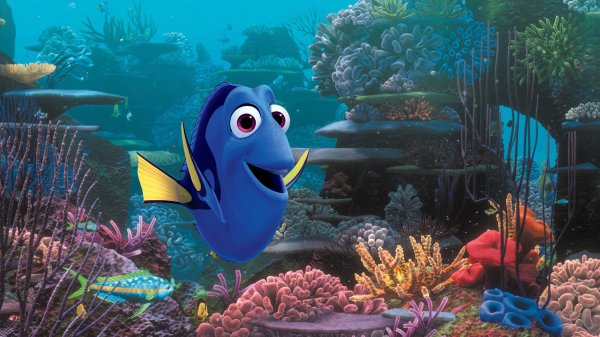 This Clip of Baby Dory from Finding Dory Will Give You All the Feels
Next Up: Editor's Pick