Welcome to the Troll Election

Dr. Aiken is an academic advisor to the Europol Cyber Crime Centre and author of The Cyber Effect.

Donald Trump has a groundbreaking leadership style. He does not demonstrate gravitas and intelligence with measured remarks and diplomacy. He succeeds with brutal populism and personal attacks. He seems to relish being nasty—even sadistic, at times.

Trump plays to the mob or, considering the vast changes caused by technology, the cyber mob. In this way, the election shows that the balance of influence is shifting. Power no longer centers on leadership but on followership. And the norms of the Internet—where cruelty is amplified, escalated and encouraged—have now jumped into so-called “real life.”

Anybody who spends time online—now almost half of the world population—knows how incredibly quickly comments can escalate from barbs to sadism there. Researchers in my field, cyberpsychology, which studies how technology impacts human behavior, have observed the greatest attention-seekers online, who identify themselves as “trolls.” The motivation for trolling behavior appears to be a combination of boredom, revenge, pleasure, attention and a desire to cause disruption and acquire power. They relish a chance to compete in a kind of 24-hour Cruelty Olympics. On multiplayer gaming sites, they delight in teasing and taunting children—then post video or audio of their victims crying. On dating sites, trolls are capable of anything from cyber-stalking, lewd comments, name-calling or cyber-exhibitionism to sexual harassment and threats. It is clearly aggressive and sometimes sociopathic. Women are often the victims.

Trump’s success as a presidential candidate is a vivid example of what I call cyber-socialization. Leading by building followers, he employs many of the tactics of a malicious online bully, from his use of taunts and name-calling of fellow candidates (“Crooked Hillary” and “Crazy Bernie” and “Lying Ted”) to his obsession with the physical appearance (“Little Marco”) and special hostility for women (“dogs,” “pigs” and “disgusting”). On Twitter and the campaign trail, as soon as the roar dies down from one of his outrageous comments, he quickly posts another to excite his followers. As Nate Silver, the American statistician and campaign prognosticator has declared, Trump is “the world’s greatest troll.”

In a recent Canadian study, a team of psychologists found a relationship between individuals who comment frequently online and identify themselves as “trolls” with three of the four components of what is known as the dark tetrad of personality, a set of characteristics that are found together in a morbid cluster: narcissism (the characteristic not included), sadism, psychopathy and Machiavellianism. The researchers concluded that trolling was a manifestation of “everyday sadism.”

If you’ve ever traveled to a new country or just moved to a new neighborhood across town, you have experienced the ways that a different environment can impact your behavior, and eventually what you perceive as “normal.” The same goes for the new environments that are created by technology. Norms evolve quickly online. And once they change in one place across a broad population, they can migrate elsewhere easily. If the world seems suddenly crueler, more juvenile and sadistic, the impact of cyber effects are the probable explanation.

Cyberspace, where Trump with his 8.19 million followers on Twitter dominates the social media landscape of the election, has become an environment where pathological behavior is gaining ground and becoming normalized. Studies show increasing evidence that there is a loss of empathy online—a heightened detachment from the feelings and rights of others, seen in extreme cyberbullying and sadistic trolling. Anonymity online, almost like a superpower of invisibility, fuels this sense of detachment, along with another powerful cyber effect called the online disinhibition effect, which can cause individuals to be bolder, less inhibited, and judgment-impaired in cyberspace. Almost as if they were drunk. Desensitization is another cyber effect, a result of access to endless amounts of escalatory, violent and extreme content on mainstream and digital media.

Once these norms have cyber-migrated, the norming process continues. In the case of the U.S. presidential election, we have seen how Trump’s schoolyard taunts and cruelty have changed the conduct of other candidates—how Jeb Bush was provoked, how Rubio became meaner. Recently, Senator Elizabeth Warren, a distinguished former Harvard Law professor, met the challenge by competing in day-long tweetstorms, employing aggressive jabs at Trump. Like in this exchange:

Yet trolling has worked for Trump—and this seems to be changing how Americans elect their leaders. Historian Richard Hofstadler once referred pejoratively to “The Paranoid Style” of political candidates of the 1950s and 1960s, who employed conspiracy theories and fear-mongering to gain notice, fuel passion and drive a right-wing agenda. Apparently a new style is dawning: The Troll Style.

Once established as a norm and used by revered public officials, this behavioral shift could unfortunately prevail in other aspects of life. In this way, and others, the digital revolution is having a monumental impact on our lives. These changes are occurring so quickly that it has become difficult to tell the difference between passing trends, still-emerging behavior and something that’s already become an acceptable and established social norm.

Sadly, for those of us trying to eradicate cyber-bullying and online harassment, and educate children and teenagers about the great emotional costs of this behavior, our job becomes much harder when high-profile leaders use cruelty as strategy—and win elections because of it. 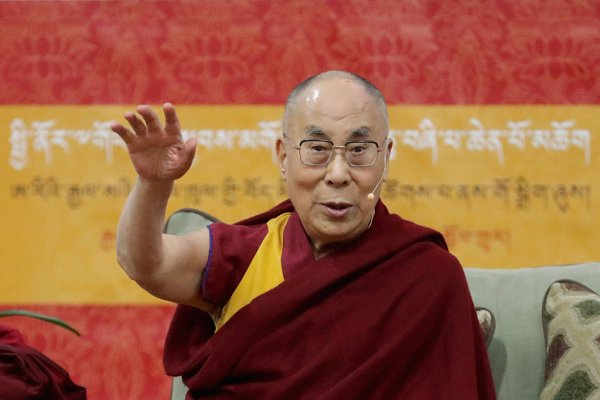 Why China Got Angry at Obama's Dalai Lama Meeting
Next Up: Editor's Pick