'The Country Is Sinking': A Q&A With Venezuelan Opposition Leader Henrique Capriles

As food riots, looting and police crackdowns shake Venezuela, the political opposition has increased its pressure on President Nicolas Maduro to accept a referendum on his rule. On June 7 opposition leader Henrique Capriles led a march to the headquarters of the country’s electoral board in support of a referendum, but police stopped him from arriving and fired tear gas at him. Two days later, deputies from Venezuela’s national assembly—which is controlled by the opposition—tried to enter the electoral HQ to get officials to give them a timetable for the referendum process. Government supporters attacked the deputies, hitting one on the face with a metal tube and sending him to hospital.

Read more: These 5 Facts Explain Why Venezuela Could Be on the Brink of Collapse

Despite the confrontations, Capriles told TIME he is confident that Maduro will eventually concede to holding the referendum this year, and new elections will end 17 years of rule by the socialist party of the late Hugo Chavez. He claims the Venezuelan military has already put pressure on the president to accept the first signatures calling for the recall vote, which were filed in May, and that there are other dissenters in the Maduro administration. “There is very strong division on the side of the government, because the country is sinking,” Capriles said. “The armed forces are arriving at a difficult hour, decisive, and they are going have to take a decision: are they with Maduro, or are they with the constitution.”

The 43-year-old governor of Miranda State, Capriles has run twice for president, and says his continued ambition to rule Venezuela “is no secret.” In 2013, he lost the presidential election to Maduro and contested the results in court. Hailing from a business family with a mixed Catholic and Jewish heritage, Capriles is from the Justice First party, which describes itself as centrist. He is the most high profile Venezuelan opposition leader alongside Leopoldo Lopez, who is currently in prison for inciting violence after a prosecution his supporters decried as politically motivated. Capriles was also incarcerated three months in 2004 in connection with his political activism, but the case against him was subsequently dropped. The interview has been edited for space.

TIME: How would you classify the circumstances in Venezuela right now?

It is like there had been a natural disaster, like a hurricane which swept things away…In Venezuela, there are about 18 events every day of looting, attempted looting, repression in the lines [for food]. These are 18 registered, but I believe we only know about half. If we don’t look for a democratic constitutional solution, I fear there will be an explosion in Venezuela and it will finish collapsing.

TIME: Will Maduro concede to the recall vote?

TIME: Would you accept a referendum for next year? [Editor’s note: A referendum less than two years before Maduro finishes his term in 2019 could mean he be replaced by his vice president rather than holding a new election.]

TIME: Are you scared that you could be imprisoned?

I think with these conditions in the country are such that if Maduro put me and other colleagues in prison, in my opinion it would only accelerate his downfall…Maduro did not want them to hand in the signatures [for the referendum], the electoral officials didn’t want to accept them. Do you know why they accepted them? Because the military said they should accept the signatures… There is very strong division on the side of the government, because the country is sinking…The armed forces are arriving at a difficult hour, decisive, and they are going have to take a decision: are they with Maduro, or are they with the constitution?

TIME: How can you persuade millions of supporters of Hugo Chavez to vote against a socialist government?

I achieved it against Maduro [in 2013]. Almost a million Chavistas supported me. Here there is not a confrontation among the people, or a civil war. No. Here the people are not going to fight one another. This is a fight between the Venezuelan people and the government…These socialist leaders, in quotation marks, hide behind the ideological debate and say they are governing in favor of the poor, and they will end inequality. But what is behind it? A gigantic corruption.

Read More: Inside the Hell of Venezuelan Police Prisons

TIME: What would the opposition do if it took power to alleviate the economic crisis and humanitarian crisis?

In Venezuela, we are not going to recover in days, but in a year we could feel the recovery of our country. My opinion is that a new government should focus on three things: food, medicine and security. If the Venezuelan government permits assistance then donated medicine would arrive from the European Community and other countries…The control of the exchange rates has been hotbed of corruption, the biggest center of corruption of this government. But you can’t lift them from one day to the next…you have to go for a reconciling of the exchange rates. 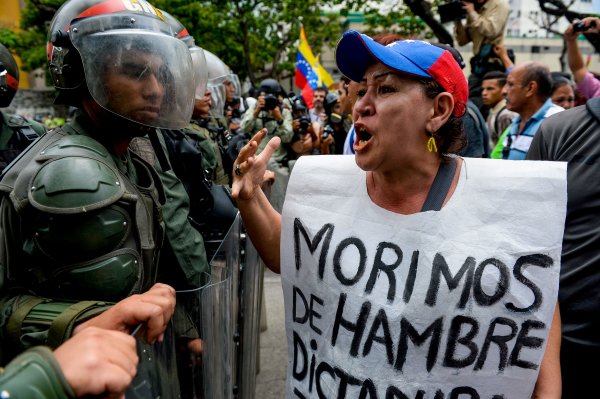 Hundreds Arrested in Venezuela Food Riots
Next Up: Editor's Pick