Kim Kardashian made no bones about defending Kanye West when asked about her husband’s infamous feud with Taylor Swift. In her GQ cover interview for the magazine’s July issue, Kardashian spoke about the most recent controversy to come out of the pair’s fraught relationship—Swift’s denial that West was given permission to rap the line, “I feel like me and Taylor might still have sex/Why? I made that b—ch famous,” in “Famous,” a track from The Life of Pablo.

“She totally approved that,” the reality star turned media mogul told GQ. “She totally knew that that was coming out. She wanted to all of a sudden act like she didn’t. I swear, my husband gets so much sh—t for things [when] he really was doing proper protocol and even called to get it approved. What rapper would call a girl that he was rapping a line about to get approval?”

The lyric in question—which West said in a tweet that Swift thought was “funny”—garnered a strong negative response from the 1989 artist after its February release, and even seemed to inspire her acceptance speech for album of the year at the Grammys the following day.

However, Kardashian claims that not only is there video footage of West receiving Swift’s approval, but that there were several witnesses to the telephone call. “Rick Rubin was there. So many respected people in the music business heard that [conversation] and knew,” she said. “I mean, he’s called me a b—ch in his songs. That’s just, like, what they say. I never once think, ‘What a derogatory word! How dare he?’ Not in a million years. I don’t know why she just, you know, flipped all of a sudden.… It was funny because [on the call with Kanye, Taylor] said, ‘When I get on the Grammy red carpet, all the media is going to think that I’m so against this, and I’ll just laugh and say, ‘The joke’s on you, guys. I was in on it the whole time.’ And I’m like, wait, but [in] your Grammy speech, you completely dissed my husband just to play the victim again.”

A representative for Swift, in turn, issued a statement to the magazine in response to Kardashian’s claims, writing that “much of what Kim is saying is incorrect.” The statement goes on to directly address Swift’s feelings about the song in question: “Kanye West never played the song for Taylor Swift. Taylor heard it for the first time when everyone else did and was humiliated. Kim Kardashian’s claim that Taylor and her team were aware of being recorded is not true, and Taylor cannot understand why Kanye West, and now Kim Kardashian, will not just leave her alone.” 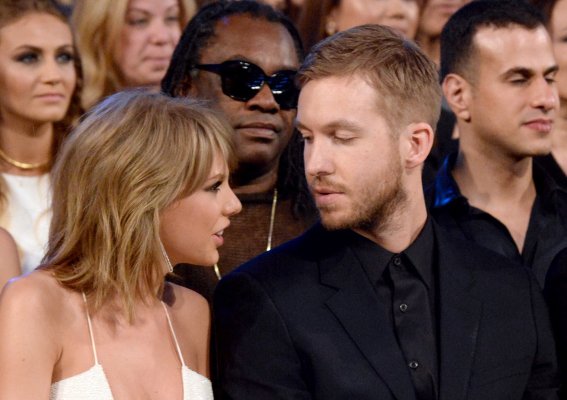 Taylor Swift and Calvin Harris Have Already Deleted Any Evidence of Their 15-Month Love Affair
Next Up: Editor's Pick