The Gay Bar As Safe Space Has Been Shattered

If Omar Mateen sought not merely to end lives but also to sow terror in the LGBT community, he couldn’t have chosen a more apt target. For decades, gay bars have functioned not merely as watering holes but as community centers. They are–or were, until the morning of June 12–perceived as the ultimate safe space for queer people. Mateen’s attack tore a hole in gay Americans’ fragile sense of security. What does one do when a safe haven becomes a target?

The scope of the violence is unprecedented, but the fact is not: Past incidents like the burning of New Orleans’ UpStairs Lounge, which killed 32 in June 1973, have only emphasized the importance of strongholds where gay people could socialize freely. The police raid on New York City’s Stonewall Inn in June 1969 helped crystallize the challenges gay people faced–out of which came a movement. The incremental fight toward equality began at the bar.

But if gay bars took on meaning as centers for social and political organization, they’re just as important for offering the opportunity to get out of the fray. Equality also means the right to one’s own space, and gay bars provide a separateness, a freedom from scrutiny, that’s available virtually nowhere else in the culture. Unlike members of marginalized ethnic or religious groups, gay people rarely grow up surrounded by family members who reflect their image. There is, at first, no mother tongue to describe their experience of life, no tradition to bind them to the world. Gay bars are where gay people have historically found one another to learn that language and invent those traditions. Being gay is not a religion, but a space for people to come together to celebrate who they are in the face of life’s obstacles could be compared to a church.

In the past few years especially, the number of spaces in which gay people in much of America can feel safe has expanded. But tolerance and acceptance are hardly the same. Being gay is still different enough to necessitate a place where one can simply be oneself in public, free from mainstream judgment. That Mateen reportedly visited Pulse for years as a patron is heartbreaking; for whatever reason he came, he was likely welcomed by those he hated.

Now progress has been stripped away in one chaotic event. The gay bar, once a source of comfort in an uncomfortable world, feels vulnerable, even dangerous. The world needs places like Pulse–a bar founded by the sister of an AIDS victim in order to unite the Orlando gay scene–more than ever. Yes, the old saw about continuing to celebrate life in the face of those who’d glorify death does apply. But if there’s to be mourning for people slain for being gay, let it happen at the bulwarks against hatred. We can’t abandon them yet. 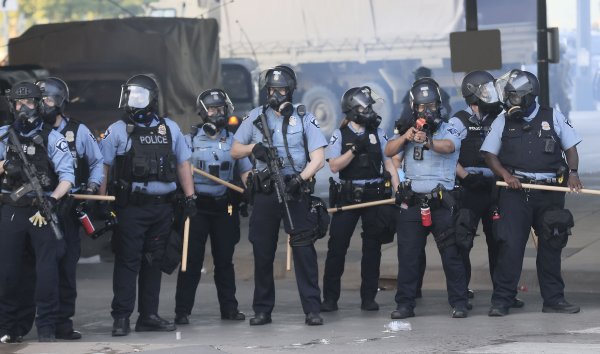 I'm a Minneapolis City Council Member. We Must Disband the Police—Here's What Could Come Next
EDIT POST