After Orlando, Hillary Clinton Must Defang the Demagogue. And That’s Harder Than It Looks

In the immediate aftermath of the Orlando ­massacre, we the media fell into a familiar trap. We broadcast Donald Trump’s assorted ­outrages—­including his vile insinuations that the President is in sympathy with the terrorists; the various lies and mistakes that punctuated his speech (the shooter was born in a place called “Afghan”); his renewed, un-­American call for a ban on Muslims entering the country. All these were reprehensible and, to my mind, make him unfit for the presidency. But we missed something else: there was a surprising power to Trump’s speech, to his crude arguments. That power has to be acknowledged and confronted in a substantive way. This will now be the role of Hillary Clinton, who spoke about Orlando a couple of hours before Trump, delivering yet another mature, eloquent and reasonable speech. This is the shape of the campaign to come.

I can easily imagine a fair-minded American sympathizing with Trump’s talk about the shooter’s family, refugees from Afghanistan, the extremist father praising the Taliban, killers of hundreds of American troops: “The bottom line is that the only reason the killer was in America in the first place was because we allowed his family to come here,” Trump said. His most damaging attack on Clinton was in her own words: “Let’s be clear,” she once tweeted, “Islam is not our adversary. Muslims are peaceful and tolerant people and have nothing whatsoever to do with terrorism.”

This was, indeed, a classic example of the overripe political correctness that Trump has ridiculed all the way to the Republican nomination. Yes, the overwhelming majority of Muslims are “peaceful and tolerant,” but the extreme Wahhabi and Salafist sects represent a significant philosophical strain within Sunni Islam and a clear and present danger to the rest of the world. As Clinton herself acknowledged in her post-Orlando speech, “It is long past time for the Saudis, the Qataris and the Kuwaitis and others to stop their citizens from funding extremist organizations. And they should stop supporting radical schools and mosques around the world.”

A more difficult problem is how to respond to Trump’s nativism, a tendency as old as the Republic. Why was the Mateen family given shelter here? Are the laws governing such entries still appropriate? The immigration issue isn’t easy to explain; it is, as Trump has shown, easy to demagogue. After 50 years of an expansive immigration policy, there are reforms that make sense. Several of Trump’s more rational Republican opponents proposed changing the emphasis from a system that allows entry to all members of an extended family to one that favors those who bring skills with them. Another question: Should those who come here illegally have a path to citizenship or simply be accorded ­legal—that is, ­nonvoting—­status? A good part of Trump’s success is attributable to Washington’s inability to find consensus on any reasonable reforms at all.

Clinton has taken positions on these issues, but she will need to challenge Trump’s false assertions and bigoted “solutions” in a major speech soon. That is the unfairness of this campaign: Trump doesn’t want to reform our immigration system; he wants to exploit it. He is allergic to details; Clinton thrives on them.

Her post-Orlando speech reiterated a strong, thoughtful program to combat homegrown terrorism. With the primaries over, she was able to celebrate the work of first responders, also known as police, ­and praise their military equipment, like the Kevlar helmet that saved one officer, without fear of consequences from left-wing Democrats. She was also able to reiterate her support for an ­assault-­weapons ban and for a ban on gun sales to people on the terrorist watch list, which Republicans oppose. It’s been argued that the Clinton Administration’s assault-­weapons ban had only marginal effect—but we’re living in a different era now, when assault-­rifle massacres are almost weekly events.

This election is a test. The Trump and Clinton speeches after Orlando illuminate the essential choice. To defang the demagogue, Clinton will need more than ridicule—­although she has shown a delightful ability to get under Trump’s skin. She’ll need to carefully unpack and respond to arguments Trump makes that have resonance, including charges soon to come about the work of the Clinton Foundation, which took major contributions from the aforementioned Saudis, Qataris and Kuwaitis. She is carrying a heavy burden, the burden of proof, the burden of being factual, of protecting our democracy and our very complicated Constitution from an unprincipled opponent who has no restraints at all. 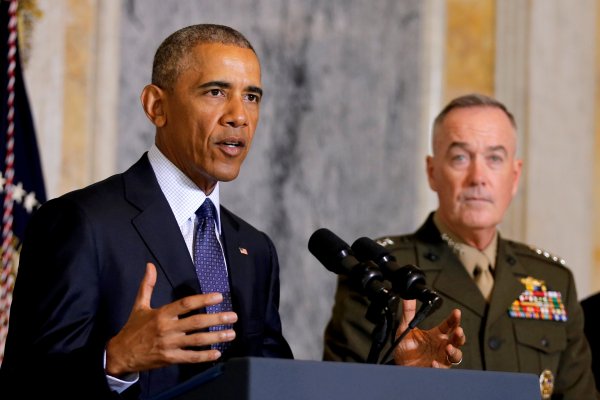 What Does the Military Think of Trump?
Next Up: Editor's Pick