Problems with mail-in ballots in California. Overcrowded polling places in Arizona. Missing names on the voter rolls in New York.

Those are just some of the problems that Democratic and Republican primary voters faced over the last few months, leaving voting rights advocates concerned about the November elections, where turnout will be dramatically higher.

“We are at a crossroads in our democracy. This is a moment that really requires that states and elected officials to explore ways to make voting easier,” said Kristen Clarke, president and executive director of the Lawyers’ Committee for Civil Rights Under Law.

There’s no single fix to the problems, since each state runs elections in its own way. But advocates have found issues with malfunctioning voting machines, too few polling places and election workers misunderstanding state laws.

California, which voted last week, had problems with its vote-by-mail system. Kim Alexander, president of the nonpartisan California Voter Foundation, said the state’s 58 counties were not handling the process consistently. Some notified voters if their ballot was rejected, giving them the opportunity to fix the mistake, while others did not. She foresees similar problems in November.

“I don’t think it’s likely that we’ll make any significant changes to our vote-by-mail system between now and then,” Alexander said.

In New York, 125,000 voters in Brooklyn were removed from voter rolls, prompting an audit of the Board of Elections by NYC Comptroller, Scott Stringer. In addition to that, there were reports of voters having difficulties accessing polling sites.

Last week, a separate audit showed the Board of Elections did not have accurate records of more than 1,450 pieces of election and office equipment, “raising alarms that property could be stolen or go missing without anyone noticing,” a statement from the comptroller’s office said.

And in Arizona, the number of polling places were reduced in Maricopa County, which caused long lines for voters.

The nationwide Election Protection voter hotline has taken more than 21,000 calls since February, Clarke said, about anything from issues with voter ID requirements in Texas, to North Carolina eliminating early voting opportunities to Georgia, where one polling location in a majority black neighborhood was nearly moved to a sheriff’s office, Clarke said.

“There’s always reasons that are particular to each state,” said Jonathan Brater, counsel for the Brennan Center’s Democracy Program about the issues that spring up.

Brater said the wave of laws that have been largely been put in place since 2010 include voting restrictions include stricter ID requirements, proof of citizenship during voter registration and cutting back on early voting and same-day registration opportunities.

The Brennan Center has observed trends in these states: The most restrictive laws have been passed in states that are GOP-controlled and the second trend is related to race, Brater said. Brater said seven of the 11 states that had the highest African-American turnout in 2008 have new voting restrictions in place. Eight of the 12 states that have seen the largest Hispanic population growth between the years 2000 and 2010 also have new restrictions.

Not only could voters face difficulties at the polls due to the restrictions, but some would-be voters could be dissuaded from attempting to vote at all in anticipation of facing obstacles, he added.

Since then, California, West Virginia, Vermont and Connecticut have passed similar laws, while Illinois is waiting on a bill that has been sent to the governor. 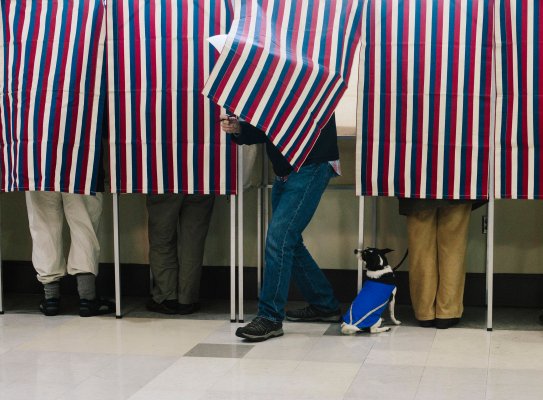 Maine Considers Radical Change to How Residents Vote
Next Up: Editor's Pick