These 6 Gadgets Will Help You Win the Summer

Grass, trees, pools. Running, swimming, playing. When you think of summer, that’s what pops into your mind. But just because you’ve got to go outside, that doesn’t mean you can’t take your goodies with you. From tools for better living to toys for better playing, these six devices will help you get the most out of the fairest time of the year.

Warm weather brings water, whether it’s fishing down on the river or surfing at the coast. But few people take on these activities while wearing a floatation device. That’s a problem. More than 370,000 drown every year in otherwise preventable accidents.

This $89 wristband looks like a gadget out of a James Bond movie, but can be a real lifesaver. Inflating a small balloon with the help of a refillable cartridge, Kingii doesn’t just give you a floatation device to hold onto when the water gets choppy, it’s also reusable so it can save your hide more than once.

Bocce is a simple but addictively fun game, which is why the sun going down is just about the only thing that puts an end to the action. But with this $45 set of glowing bocce balls, the fun doesn’t have to stop when it gets dark out. Great for the beach or grass, the set consists of a pair of red, green, blue, and yellow translucent balls with LED lights in the middle, and a smaller white (also glowing) white pallina. Powered by button batteries and practically uncrackable, the glowing orbs can pretty much handle whatever you throw at them — or what you throw them at. The set comes with a carrying case and extra batteries, which is more than generous, considering that the balls will glow for 15 hours on fresh cells.

Don’t “man the grill” — robot it instead. This $7,000 app-connected grill is loaded with everything you need to cook burgers like a pro. Packing a pair of infrared burners, a rotisserie, and stainless steel grates, the cooking surface, measured by sensors, is high quality. With voice activation and app control, it’s also a gourmet geek’s dream. Just ask for a status update, and the Smartgrill will speak aloud, telling you down to the second how much longer it will take to prepare your vittles.

The embodiment of all human technological accomplishment, this $700 solar powered pool robot keeps the surface of the water clean while whirring away without interruption, thanks to its energy independence. Saving pool owners time, energy, and money, the Solar-Breeze boasts little-to-no upkeep costs once it starts gobbling up the Sun’s rays. In floating along and devouring every bit of ickiness in its path, the Solar-Breeze also helps the pool’s filter from having to run overtime, sifting out all the nastiness it can in advance. It can be a surprising thing to swim alongside a robot, but Solar-Breeze shares the same mission as people who love to swim: making waves without making a big splash.

Working and playing outside all day isn’t what it used to be. A stripped down ozone layer has left people susceptible to powerful UV radiation that leads to sunburns and increased cancer risk. This $49 wearable can monitor your exposure to the sun and, through a Bluetooth connection with your smart phone, alert you when you’ve gotten enough vitamin D and too many harmful rays. Also packing a pulse oximeter sensor, the wearable can be used to advise on stress management and workout optimization. And if that’s not helpful enough, you can snap it onto your keychain to use as a locator device, or link it with your phone’s camera to use as a remote shutter.

Insect-killing devices might feel like the zenith of 70s technology, but this $79 bug shield generator uses everything from LED lights to thermal lures to make sure up to an acre of your backyard is a bug-free zone. Automatically turning on and off at dusk and dawn, the weatherproof device has 5,500 volts of zapping power, protecting against pests that carry the West Nile and Zika viruses. The Stinger’s black UV light draws in the bugs from a distance while its octenol lure attracts them in at closer range. A thermal lure also simulates body heat, enticing the bugs further. Once they’re drawn into the grid, it’s game over for the pests. 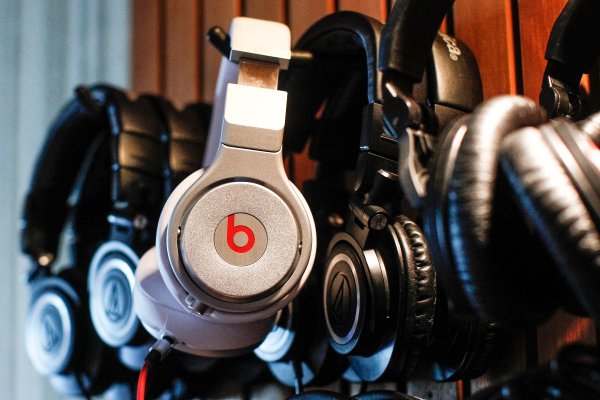 Here's How to Get Free Beats Headphones From Apple
Next Up: Editor's Pick