A woman carries a boy who has been injured in a Shiite Houthi attack, targeting residential areas, to es-Sevra hospital, in Taiz, Yemen, on June 4, 2016.
Anadolu Agency/Getty Images
Ideas
By Ray Offenheiser
Ray Offenheiser is the President of Oxfam America.

We sit by as if waiting for our turn to die,” a Yemeni woman named Aisha told my Oxfam colleague earlier this year. It’s a fair summation of most Yemenis’ attitudes towards the war that a U.S.-backed, Saudi-led coalition has waged on behalf of the Government of Yemen against Houthi rebels. The conflict has left more than 21 million people in Yemen dependent on foreign aid to survive, more than anywhere else on the planet. The parties to the conflict have all committed horrific violations of the laws of war and created one of the world’s worst humanitarian crises.

That was the conclusion of U.N. Secretary-General Ban Ki-moon in the annual report on Children and Armed Conflict that he recently released. Ban announced that the U.N. had documented widespread abuses of children’s rights including the recruitment of 762 child soldiers, largely by the Houthis, and the killing of 785 children, mostly as a result of bombardment by the Saudi-led coalition. The message was clear: among those fighting in Yemen, no hands are clean.

Saudi Arabia promptly insisted that the U.N. remove it from the report’s blacklist and threatened to cut off relations with and funding for the U.N. if it did not comply. Amazingly, and to the U.N.’s great discredit, the threat succeeded. By capitulating, the U.N. relinquished some of its much-needed credibility as a mediator in Yemen and backtracked on the first of the founding promises of its charter, “to save succeeding generations from the scourge of war.”

It is tempting to view the U.N.’s betrayal of Yemeni children exclusively as a failure of the U.N.’s leadership, but this incident is not an anomaly. For over a year, powerful U.N. member states have helped insulate the Saudi-led coalition from culpability and, in so doing, fueled its righteous outrage at attempts to hold it to account. Since its intervention in Yemen began over 15 months ago, the coalition has found the U.N. a highly convenient venue in which to be absolved of human rights abuses—thanks largely to the enabling of Saudi Arabia’s powerful allies, the U.S. and the U.K.

In September, the U.N. Human Rights Council considered a Dutch resolution to establish an independent investigation into violations of international law by all sides in Yemen’s conflict. This even-handed approach proved too threatening for the Saudi-based coalition. With support from the US and U.K., it succeeded in moving an alternative proposal, under which the Government of Yemen, a party to the conflict with no presence or capacity to investigate in most areas of the country, would conduct the investigation. To no one’s surprise, the investigation has not published so much as an allegation in the nine months since its establishment.

The U.N. has failed Yemen most through the silence of its most powerful body, the Security Council. The Council last adopted a substantive resolution on the situation in May 2015, following the coalition’s intervention. That resolution confirmed the legitimacy of the ousted government and demanded the Houthis disarm and stop exercising government functions. Rather than use these demands as leverage to bring the Houthis to the negotiating table, the government and the Saudi-led coalition have held them out as preconditions to peace and strengthened their resolve to defeat the Houthis. The result has been an ever-worsening humanitarian catastrophe and a military stalemate, with both sides reluctant to make concessions. The Council’s voice is sorely needed to break the deadlock, but the U.S. and U.K. have opposed the kind of collective action that might embarrass their Gulf allies.

With much of Yemen’s population on the verge of famine and without access to basic health services, the U.N. and its most powerful member states must prioritize the survival of Yemenis over their bilateral relations. The Security Council should immediately adopt a resolution that calls for all parties to respect the ceasefire that they have agreed without any preconditions, allow unrestricted delivery of humanitarian assistance and commercial goods, and demonstrate maximum flexibility to expeditiously reach a comprehensive peace agreement. The U.N.’s dramatic reversal this week may have caught the headlines, but only bold Security Council action, with the U.S. and the U.K. in the lead, can restore the U.N.’s credibility and herald the peace that the Yemeni people demand. 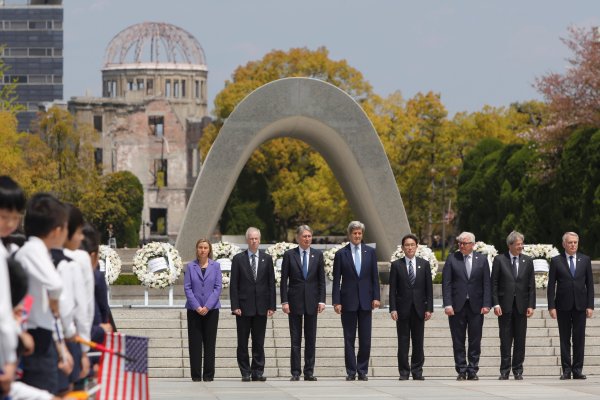 Former U.S. Ambassador to Japan: Obama's Hiroshima Visit Will Articulate the Destruction of War
Next Up: Editor's Pick