Nick Jonas is busier than ever. Out with his third solo album, Last Year Was Complicated, Jonas is also building an acting career, with appearances on the Audience Network’s mixed martial arts drama Kingdom and in the recent film-festival sensation Goat, about fraternity hazing. On top of it all, Jonas recently appeared at a vigil for the victims of the Orlando shooting at the Stonewall Inn, in keeping with his image as a nascent gay icon (though Jonas himself is not gay, leading to some controversy). In an interview last week, Jonas addressed the line between being an ally and pandering, as well as the presidential race, his researching how to be a college student, and his decision (with tourmate Demi Lovato) to cancel tour stops in North Carolina.

TIME: Your album is called Last Year was Complicated. Has this year been less complicated?

Jonas: It has been. Which is a good thing. I feel like being able to create and pour my heart into the music really helps. And more than anything, I think that the focus this year has been on the art. There was a need in the beginning of the relaunch to speak about the past and give some perspective to the journey that I was on and the journey that I’m on now, and to be transparent about that and educate people about who I am and where I am today. And the physical transformation was a conversation piece, because it was new for people. They’re so used to seeing me one way, and obviously, you grow and your life and physicality changes.

You’ve moved past your Disney Channel image, but did that experience help you?

It’s easy for a lot of people to try to put the words in my mouth that it was a horrible experience and that there was exploitation of young people. There can be that. But I think that what I took away, along with trying to break that mold, is the work ethic.

These songs get personal. Do you mind when people try to piece together whom they’re about?

I think it’s great. I choose to be more tight-lipped in interviews, but I can be more free to speak in music and even have some fun with it. I’m a fan of Drake’s new record. I’m sitting there listening, trying to figure out what song is about what person!

You’re touring with Demi Lovato this summer. Besides your mutual starts on the Disney Channel, what else do you have in common?

We come from a very similar place, obviously, that’s where our friendship was built. Our fanbases have both evolved in a major way. And I’d say that over the last two years, I’ve seen a lot of new fans at shows, which has been very exciting. Demi’s been through a lot and come out the other side stronger than ever. We’re both inspired by soul music at the core. Demi’s continuing to evolve as an artist, she’s pushing herself to go deeper on the soul and R&B side of things, pull some different sounds out. I think that, naturally, just being friends and sharing music, that’s going to happen.

You and your tourmate Demi Lovato made news when you announced you were cancelling two shows in North Carolina to protest the HB2 law. A lot of other artists are continuing to tour there. What went into making your decision, and what do you make of other artists continuing their tours?

I think everyone goes about these things their own different way. I don’t think any version of making a stand for something you believe in is wrong. For Demi and I, we felt that the right move was to make a really bold statement and cancel the shows. We love our fans in the LGBT community, and they’re so supportive of us. This is one of those moments where we saw something unjust, and you stand your ground and do what you can to effect positive change. We were very disappointed to cancel the shows, and we love to play for our fans. They were disappointed as well. It’s a tough thing to deal with. Seeing our fans stand with us and the change we’re hoping to see is a great thing.

Over and above this particular decision, you’ve consistently made an effort to appeal to gay male fans, and you are not gay. Is there a line for you between being inclusive and pandering?

You have to just understand that there is ignorance every­where and people are trying to be negative. My heart is very pure, and I work with people who are creative, and if photo shoots are sexual in some way or have a sexy edge, it’s just fun to get in a room and create. It’s no more complicated than that.

Who’s your role model for your career going forward?

I don’t know that it’s one person in particular. Acting is a huge part of my world now. Looking at people that have been able to successfully manage and juggle acting and music are big inspirations. People that have made big transitions careerwise—Matthew McConaughey, Mark Wahlberg types. Or on a musical level, Justin Timberlake is a great example of someone who’s set the bar so high for young male pop artists.

How do you balance your varying interests?

I was in Goat, which was a breakout moment at Sundance and the Berlin Film Festival, and a lot of great scripts came in after that, and obviously I want to make the best one or two of those happen, but touring a record is important. Making sure there’s room for all of it is a process.

I was making this record while shooting Kingdom seasons 2 and 3. Living in the heavy space that I do while shooting that show, just because it is so dramatic and intense, there are moments when you need that release, you need to step outside the Kingdom world for a minute. I would encourage people to watch the show, because it gives you more perspective on where I was at that moment.

In 2009, you had a band, Nick Jonas and the Administration named for your interest in the presidency. Does that interest continue?

I’m kind of fascinated by the whole idea of the presidency and how leadership comes to be, and I think all of us who watch House of Cards feel the same way. It’s an obsession on some level, and obviously as an American and a voter, it’s important to be aware of.

Have you been watching this election with interest?

I try to be as aware as possible, while not getting absorbed in the madness. Historically, I like to keep my political views to myself, because it’s a personal thing—I don’t want people to feel alienated or judged by my views, or vice versa.

What research went into Goat?

Our director, Andrew Neel, has really got an eye for keeping things extremely real. That was the whole approach. I was on a college tour last year where I decided to do the college bar experience and maybe have one or two more drinks than I should’ve. I kind of just owned it and had fun with it. 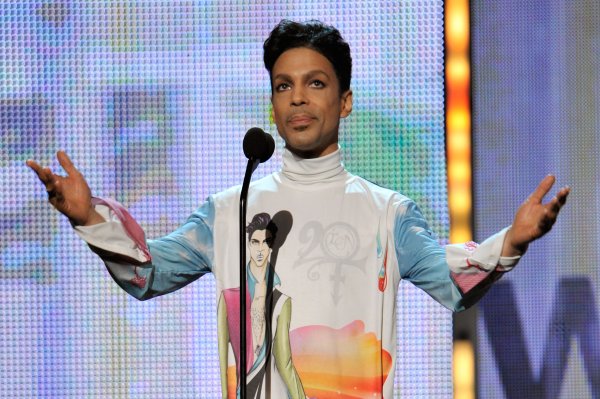 These Are All The People Vying for Prince's Fortune
Next Up: Editor's Pick