An Alligator Dragged Away a Child Near Disney. But Fatal Attacks Are Rare

For a parent, there’s probably nothing more horrific than the idea of an alligator attacking your young child, as happened to a two-year-old on vacation near a Disney resort in Orlando on Tuesday night. Authorities are searching for the child.

But while the alligator population is dense in Florida, fatal attacks are relatively rare.

The Florida Fish and Wildlife Conservation Commission’s records show an average of about 10 bites per year in the state over the last two decades, but from 2008 through 2014 there were no fatalities. Floridians were disturbed by two reported deaths in 2015 (though the commission’s database currently records only one), and in 2006, an alarming three women were killed in the space of a week in May. As TIME reported then, the increase in aggression could have been due, in part, to the animals being particularly territorial during mating season (which takes place in May and June) and because the animals have lost areas of their habitat to human spaces over the years even while their population has grown.

Still, humans are not typical alligator food. As the executive director of the commission told USA Today, the alligator in the most recent case may have mistaken the boy for a small dog or raccoon. Experts advise that people in regions with alligators keep their distance if they ever spot the large reptiles and avoid feeding any wild animals, which could create an association between humans and food, the Orlando Sentinel reports.

A search is still underway for the child who was dragged into the water near Disney’s Grand Floridian Resort & Spa, and the Orange County Sheriff Jerry Demings has vowed his team is “not leaving until we recover the child.” 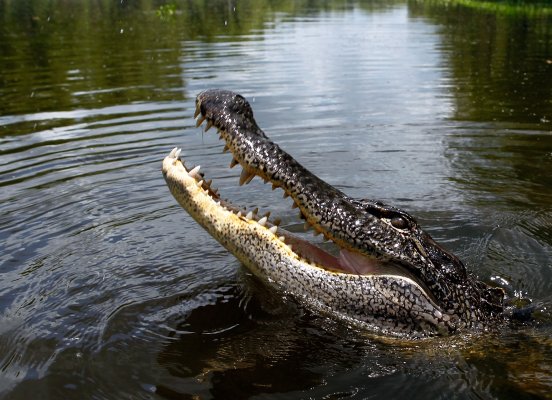 This 11-Foot Alligator Was Found In A Florida Storm Drain
Next Up: Editor's Pick