Omar Mateen’s sexuality was the least of Sitora Yusufiy’s worries.

Their five-month marriage was abusive from the start. He was controlling. He kept her from seeing her family. He beat her, pulled her hair, dug his fingernails into the soft flesh of her wrists when she wandered away from him in the supermarket.

But when she thinks back on the brief marriage seven years ago, there are other recollections that come to mind. “There were things he would do in his daily life that most straight men don’t do,” she said in a phone interview with TIME on Tuesday.

“He would take a long time in front of the mirror, he would often take pictures of himself, and he made little movements with his body that definitely made me question things,” she recalled. “It definitely popped up in my head whether he was totally straight.”

Mateen and Yusufiy met on Myspace and were married from April to August 2009, until her parents sensed she was unhappy and came down to Florida from New Jersey to check on her. When they realized she was in an abusive situation, Yusufiy’s parents took her back to New Jersey with them, and the marriage abruptly ended.

Yusufiy said she never noticed anything in their sex life that would lead her to believe Mateen was gay. But she noted that any kind of sexual exploration would have been totally forbidden by Mateen’s strict Afghan family.

“In his family structure, homosexuality was really not tolerated,” she said. “And one of the directions of his life was to be a perfect son.”

That pressure to be live up to his father’s strict expectations often led Mateen to lash out with violence, she says. Once, she recalled, she fell asleep on the floor while watching TV and he started beating her as she slept. He yanked the pillow out from under her, pulled her by her hair, and then started to choke her. Hours later, when she asked him what happened, at first he claimed he was angry that she hadn’t finished the laundry. Then he revealed that he’d had a fight with his father.

As the only son of Afghan immigrants, Mateen was subject to high expectations from his parents. “It’s pretty pressured. You have to be perfect in every way, you have to have a high education, you have to be totally respectful,” Yusufiy said. “And not be in any way homosexual, that’s for sure.”

Mateen’s sexuality has been in question since he was revealed as the killer. Various media outlets have reported that users on the gay-dating app Jack’d say they have exchanged messages with Mateen, but the CEO of Jack’d says they have not yet found any proof that Mateen had an account. A former classmate at Indian River Community College told the Palm Beach Post that Mateen went to gay bars with classmates and once tried to pick him up. Four regulars at Pulse, the nightclub where the shooting occurred, told the Orlando Sentinel they had seen Mateen there before.

But Pulse is about a two-hour drive from Mateen’s home in Fort Pierce, Fla., and it would take four hours of driving to go there and back in one night. Nobody recalled ever seeing him at TattleTails, a gay bar just a few miles from his apartment. In three gay bars in West Palm Beach, an hour from Mateen’s home, none of the bartenders or customers told TIME they remembered ever seeing him.

Yusufiy recalls once hearing Mateen’s father Seddique Mateen call his son gay in Farsi, but Mateen laughed it off. “They had this relationship where Omar was always trying to impress him and be the perfect son for his father and live up to his approval, because his father is such a prominent political figure,” she said.

The elder Mateen repeatedly rebuffed questions about homosexuality in an interview, including multiple queries about whether his son might have been motivated by homophobia and whether could have been gay. At one point, he said “Let me tell you: my son is not gay. He’s not.”

Yusufiy isn’t so sure. “It’s just making more sense in my head from my personal experience that this was probably it,” she said. “He might have been homosexual himself and lived that lifestyle but could never ever come clean about it because of the standards of his father, because of the obligation to be a perfect son,” she added. 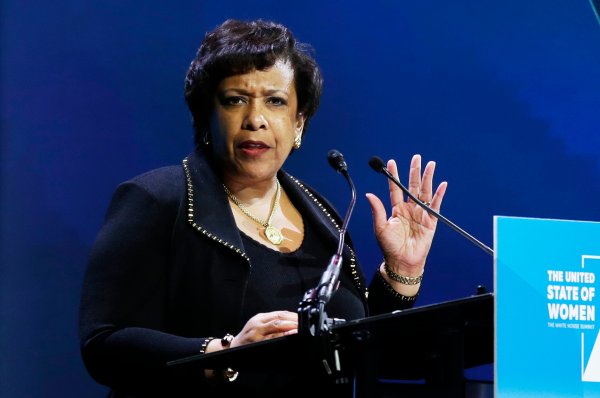 Attorney General Loretta Lynch on Orlando Shooting: Everyone Needs a Safe Space
Next Up: Editor's Pick