The Number of Unaccompanied Refugee Children Arriving in Europe Has Doubled

Migrant children sit on the lower deck of the Migrant Offshore Aid Station ship MV Phoenix after being rescued from an overloaded wooden boat 10.5 miles (16 km) off the coast of Libya on Aug. 6, 2015
Darrin Zammit Lupi—Reuters
By Nash Jenkins

There has been a drastic increase this year in the number of unaccompanied migrant children arriving in Europe from North Africa, according to a new UNICEF report released Tuesday.

The U.N. Children’s Emergency Fund provides grim statistics that illuminate the abuses within the ongoing migrant crisis. According to the report, 9 in 10 refugee children escaping to Italy from North African countries, like Libya, are unaccompanied. And more than 7,000 have made the journey so far this year — double the number of young migrants who made the passage in 2015.

Abuses such as forced prostitution and labor are endemic among the youths fleeing to Europe, the report finds, as most depend on the mercurial favor of human smugglers in order to “earn” their transit.

“If you try to run, they shoot you and you die. If you stop working, they beat you. It was just like the slave trade,” one 16-year-old boy told UNICEF. “Once I was just resting for five minutes, and a man beat me with a cane. After working, they lock you inside.”

The report also noted that many of the refugees who have died crossing the Mediterranean so far this year — 2,809 in total — were children.

“It is a silent and desperate situation — out of sight and out of mind,” Marie-Pierre Poirier, UNICEF’s coordinator for the refugee crisis in Europe, said in the report. “Yet tens of thousands of children face danger every day and hundreds of thousands more are prepared to risk everything.” 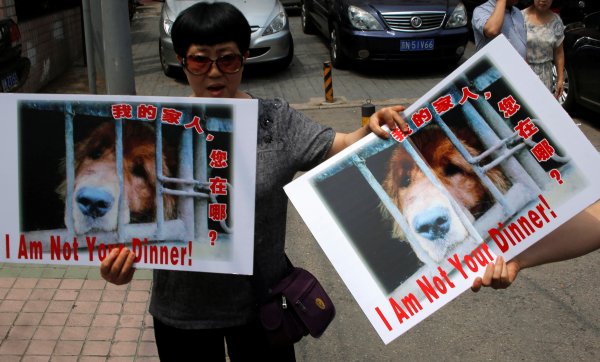 Millions of Chinese Call for End to Yulin Dog Meat Festival
Next Up: Editor's Pick