President Obama at Women's Summit: This Is What a Feminist Looks Like

President Obama stood firm in his feminism at the United State of Women Summit on Tuesday afternoon, a daylong convening hosted by the White House to tout the progress and the work that lay ahead for the American woman.

“I may be a little grayer than I was eight years ago, but this is what a feminist looks like,” President Obama said to cheers Tuesday afternoon. About 5,000 women descended upon the Walter E. Washington Convention Center in Washington, D.C., for the event, which featured speeches by Vice President Joe Biden, House minority leader Nancy Pelosi, White House senior adviser Valerie Jarrett and First Lady Michelle Obama.

The President said Tuesday he couldn’t be prouder of what his Administration has been able to accomplish for women and girls over the past seven and a half years. In his cheerful speech, he noted the work his administration has done to advance family-leave policies, women’s health care and access to STEM education. Some of the more recent policies addressing family leave and the minimum wage, however, were accomplished via executive action, limiting their scope to federal employees and federal contractors. Outside of government, the White House has often relied on partnerships with private businesses and companies to champion change. On Tuesday, the White House announced 28 companies signed on to their Equal Pay Pledge, agreeing to review their own practices when it comes to pay equity and hiring.

“We don’t have to have Congress agree with us. We can go ahead and make progress without waiting for them,” Obama said Tuesday to cheers. “They’ll catch up eventually.”

He also discussed feminism abroad, promoting women’s rights as a national-security issue and saying groups like Boko Haram and ISIS perpetuate violence against women and silence them.

The President acknowledged that there are many women who feel economically anxious, who have little access to expanded opportunities in jobs and pay. “There are important reasons why many women feel like the system is rigged,” Obama said. Noting that gender discrimination, unequal policies, and stereotypes about how men and women should behave in society still have a stronghold on society. “It’s not just about the Benjamin’s,” Obama said, a nod to Benjamin Franklin whose face graces the front of the $100 bill. “It’s about the Tubman’s, too.”

Obama noted, though, that he was “preaching to the choir.” Throughout the day, attendees popped in and out of panel discussions on the challenges and roadblocks that persist for women of color, women in the workplace, and women, generally. 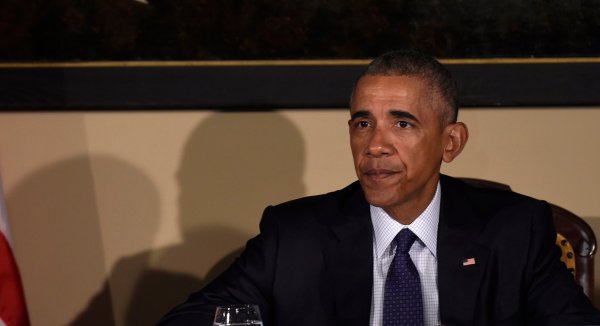 Watch Live: President Obama Speaks on ISIS and the Orlando Shooting
Next Up: Editor's Pick