Two days after the Orlando massacre and one day after Donald Trump blamed American Muslims for complicity in the attack, Hillary Clinton delivered a rebuttal to the presumptive Republican nominee marked by disbelief and outrage.

Speaking in measured tones at a rally in Pittsburgh, Clinton rebuffed her opponent, calling Trump “temperamentally unfit and totally unqualified” to serve as president, and said he is divisive, mean-spirited and clueless about how to fight terrorism.

“We don’t need conspiracy theories and pathological self-congratulations,” said Clinton. “We need leadership, common sense and concrete plans, because we are facing a brutal enemy.”

Trump in the aftermath of the Orlando terrorist attack on Monday repeated his call for a ban on Muslim immigration to the United States, although the shooter in Orlando was a U.S. citizen born in Queens a few miles from Trump’s own birthplace. He also said that American Muslims “know what’s going on” though law enforcement have found no evidence of this, and he suggested in television interviews that President Obama himself may have been involved with the attacks.

Clinton shot back: “Just one day after the massacre, he went on TV and suggested that President Obama is on the side of the terrorists,” she said. “Just think about that for a second. Even in a time of divided politics, that is way beyond anything that should be said by someone running for president of the United States.”

During her speech, Clinton also said Trump does not have an understanding of terrorism or national security.

“He says he knows more about ISIS than the generals do, Clinton said. “It’s almost hard to even think aboutwhat to say to that claim.” Clinton, by contrast suggested at her own experience in foreign policy, referring to the night when President Obama ordered the strike in Pakistan that killed Osama bin Laden; Clinton was one of the leading voices arguing in favor of carrying out the attack.

“Trump as usual is obsessed with name-calling,” Clinton said. “In the end it doesn’t matter what we called bin Laden. It matters that we got bin Laden.”

She lambasted Trump for doubling down on his call to ban Muslims from immigrating to the United States. “The terrorist who carried out this attack wasn’t born in Afghanistan as Donald Trump said yesterday. He was born in Queens New York, just like Donald was himself,” Clinton said. Trump’s Muslim ban “would not have saved a single life in Orlando.”

And she said that Trump’s platform would violate core American principles of pluralism. “It goes against everything we stand for as a nation founded on religious liberty,” Clinton said. “He’s turned Americans against Americans, which is exactly what ISIS wants.”

Clinton’s criticism of Trump comes as she transitions from the Democratic primary to the general election and prepares for an extended campaign against Trump. She has sought to define Trump as feckless and divisive before he even gets to the Republican convention. Trump continues to face widespread dislike from Republicans who have called his statements about an Indiana judge bigoted and wrong.

President Obama, who had planned until the Orlando shooting to join Clinton on the campaign trail in Wisconsin on Wednesday, also blasted Trump’s comments about Muslims, saying he is “doing the terrorists’ work for them.”

Trump, who boasts about his dead-aim when he shoots from the hip, will have to figure out how to campaign against a cautious, thoughtful opponent. It is unclear how their polar opposite styles will ultimately appeal to voters in the fall. For now, Clinton consistently leads in polls.

“It was one thing when he was a reality TV personality, raising his arms, yelling ‘You’re fired,'” Clinton said. “It is another thing altogether when he is the Republican presumptive nominee for president.” 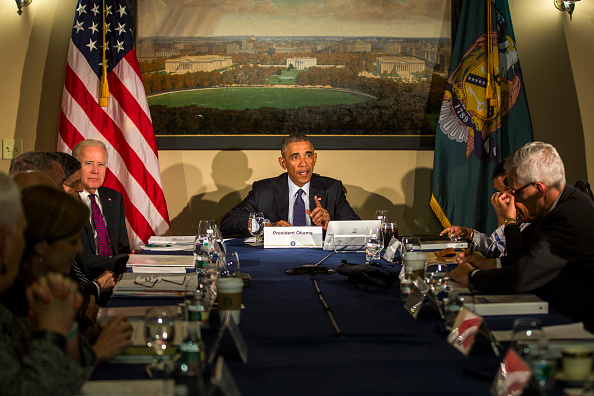