This Is What Drove the Orlando Killer

Omar Mateen
Reuters
Ideas
By Jeffrey Kluger
Jeffrey Kluger is Editor at Large for TIME magazine and the author of ten books, including Apollo 13, Apollo 8 and two novels for young adults. He has written more than 40 cover stories for TIME on topics ranging from space to human behavior to climate to medicine. Along with others at TIME, Kluger is an Emmy nominee for the web series A Year in Space.

But Mateen knew something too: There is nothing that can enlarge a very small life faster than a very big death. That’s a fact he was counting on when he pulled up at the door of the Pulse night club in Orlando at 2:00 AM on June 11—and 49 bodies were the result. Try forgetting Omar Mateen now.

That same dark bargain—personal enlargement through mass violence—is what all terrorist organizations, but particularly ISIS, offer their murderous foot soldiers. If the U.S. and other countries are going to confront the growing threat that such groups present, the first step is to understand better what’s in the mind of those front line killers.

Terrorism is by no means the only way people wrestling with anger or grievance or, particularly, lack of self-worth lash out. No biography of John Kennedy or John Lennon will ever be complete without mentions of Lee Harvey Oswald or Mark David Chapman—anonymous men both, who, with a single act, instantly took their places beside much larger figures of history. Infamy ain’t fame, but to a certain kind of mind it can feel awfully close.

Oswald and Chapman, of course, self-radicalized—as the terrorism experts would put it—stewing in political rage in one case and obsessive fandom in another, until they both decided to pick up a gun. People like Mateen are recruited, or at least invited—and the benefits package groups like ISIS offer them can look pretty impressive.

For starters, there’s a powerful sense of purpose. “Dying large and going for glory can be a mighty motivator,” says Scott Atran, a terrorism expert and the Director of Research Anthropology at the National Center of Scientific Research in Paris. “ISIS is terrific at getting young men from the petty criminal world to do that. Most of them don’t want to be petty criminals. They do it for the opportunity costs typical of a marginalized population, then ISIS comes along and says, ‘Look at what this society, without a moral compass, has forced you to do. Well, liberate yourself from these chains.'”

There’s a sense of belonging too—something that can be immensely seductive for the alienated. Terrorists are people who often start off as what social psychologist Clark McCauley of Bryn Mawr College calls “the disconnected-disordered,” a very volatile combination of isolation and pathology. Affiliating with a terrorist group can instantly change at least the isolation part. Indeed, the very language of terrorism is one of intimacy—brothers and sisters, living in cells, going underground, a secretive us against a corrupt them.

Even people like Mateen, who apparently did self-radicalize, are part of the group-think if not the actual group. “Whether [radicalization] involves direct personal contact with others or the person is just developing these ideas in his or her own mind, it’s obviously not done in a social vacuum,” says Harvard psychologist and philosopher Joshua Green, author of the book Moral Tribes.

Religion, as in so many other things, can be a force multiplier for radicalization. Europe had a spasm of terrorism in the 1970s and 1980s too, but then it was far-left groups like Germany’s Baader-Meinhof gang and Italy’s Red Brigade. Marx, however, can’t offer you immortality, and communism—which barely survived the 20th century—does not have anything like the eternal appeal of Islam or other faiths. People will wrap themselves in the larger cloak of a religion a lot faster than that of an economic system.

ISIS has been particularly effective in recruiting people to take that final step by streamlining the entire hiring process. Joining Al Qaeda used to mean packing up and moving to Afghanistan, where you’d be trained, indoctrinated and sent back home, perhaps to idle for years until you were called on to act. That takes a lot of discipline and a lot of self-control, something that people who are already given to rage and violence are not famous for exhibiting.

ISIS, by contrast, welcomes freelancers, lone wolves who can plan their slaughter for whatever reason they want and attach a grand meaning to it at the last moment. “So far as anybody knows, the Orlando shooter had no connection with any terrorist group,” says McCauley. “Basically, there’s nothing very political about him until he calls up and says, ‘Oh, I’m doing it for the Islamic State.'”

But the call changes the headlines, and the headlines are huge, and the face of the killer soon peers out from TV screens and newspapers around the world. Mateen isn’t here to see it, but the odds are pretty good he imagined it exactly this way.

All the same, the Orlando shooter, like so many terrorists, was nothing more than an ideological opportunist—a lonely, angry, violent man who likely would have found his way to murder one way or another. ISIS and other groups help people like him weaponize their hate, and in the bargain, provide them a flash of dark fame. But their ugly moment passes. No less a monster than Osama bin Laden wound up a shrunken old man, rocking in front of his television while he watched videotapes of his greatest atrocities. Then a Navy SEAL shot him in the head. Thus all terrorists.

—With reporting by Merrill Fabry/New York 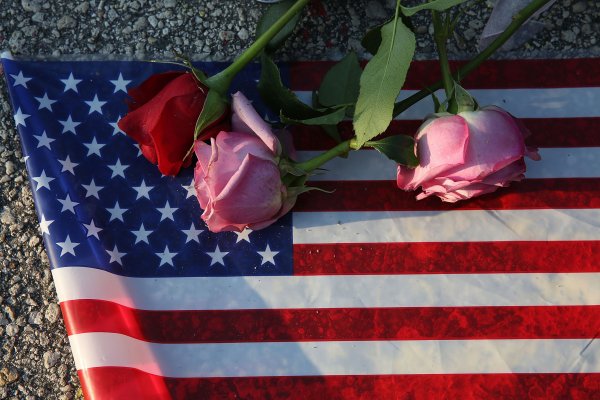 The Psychology of Hate
Next Up: Editor's Pick