At a plaza in San Francisco’s Castro neighborhood, a place where LGBT people have rallied and partied and held vigils many times before, a local named Larry Bisagni busily scrawled on the ground with chalk. It took him about a half hour Monday afternoon to write the names and ages of all the people who were killed in Orlando at a gay club the day before, in the deadliest shooting in U.S. history.

Though the shooting happened across the country in Florida, San Francisco feels the tragedy and “weeps,” as one protest sign said.

The plaza was named for local hero and LGBT icon Harvey Milk, an openly gay lawmaker who was shot to death and publicly mourned in this same neighborhood nearly 40 years ago. At the bottom of his long list, Bisagni wrote a quote from the namesake: “Hope will never be silent.” Strangers cried and hugged each other. Friends kissed and held hands.

“When is this going to stop?” said Bisagni, a consultant. “These senseless mass shootings. As human beings, we are better than this.” Asked why he made the list, he said, “I did this because these people deserve to be remembered. To somebody, whether a partner, whether a sibling, whether a child, whether a parent, somebody on this list was everything to someone.”

“You stop and look at how many names are here,” he said, looking at 49 of them. “ It gives you perspective.”

Bisagni’s somber, yet colorful, decorations were not the first on this corner. Streamers in all the colors of the rainbow had been tied to nearby posts, alongside blue pieces of paper with notes scribbled on them. “In memory of everyone at Orlando. You will always be loved,” read one. “Let us love each other. We are all human beings,” read another.

In a city that has long prided itself as a celebratory haven for LGBT people, the assault on Orlando felt, in part, like an assault on people here. Many residents of the Castro feel broken. Some are struggling not to let anger take them over as the facts still come in — whether anger at the shooter, at homophobia, at ISIS, at the FBI who interviewed the shooter and let him go, or at the failure of progressive politicians to pass stricter gun control laws.

“I can’t let the anger take hold of me,” said Jim Martinez, a limo driver who lives in the neighborhood. “We can’t let violence get in the way of our way of life.”

Dressed in a T-shirt bearing Harvey Milk’s face, Martinez had been embracing another tearful onlooker, though they’d never met before: Devin Ampola, a young man who works in his parents’ jewelry store in nearby Pacifica, Calif. Ampola said his first thoughts on hearing about the shooting were of young, closeted people who were already too scared to come out. “The simplest, most powerful form of protest is just to be who you are,” he said.

Thousands of locals — including many local politicians — appeared in the neighborhood Sunday night for speeches and a vigil. For about a mile, nearly every lamppost leading to the spot where they spoke had been decorated with a rainbow flag (because it is LGBT Pride Month). But for the first time in years, the grand flag that sits at the top of Castro Street had been lowered to half mast.

Down the block from Harvey Milk’s plaza, outside the local Bank of America, was a growing memorial piled with signs, candles and flowers. The same space has been used before to remember those who died of AIDS, and on Monday onlookers remembered other tragedies that had brought them to this spot. Signs showed the states of California and Florida decorated with defiant messages of solidarity like, “You only made us stronger.” Others mentioned Sandy Hook, the elementary school in Connecticut where 20 children were killed in a 2012 mass shooting.

A young mother who lives a few blocks from the memorial was one of several dozen people gathered in silence, which was occasionally broken by a hug or a smile. She brought her 14-month-old son, Diego, and dressed him in rainbow stockings, under American flag shorts. “It’s not just the queer community. It’s all of us,” said Melissa Porras. “I just don’t understand it. I see it as a hate crime whether it’s within the U.S. or without.” People must embrace each other, she says, “instead of lashing out.” 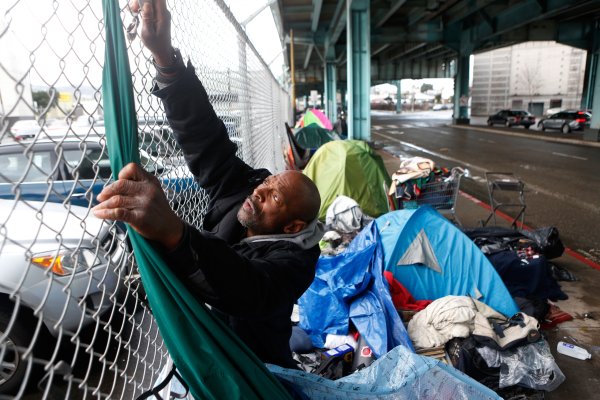 Housing the Homeless Gets Cheaper
Next Up: Editor's Pick