Regulars at Pulse, the gay nightclub that was attacked early on Sunday morning, say that the shooter had come to the club before.

At least four regulars told the Orlando Sentinel that they had seen Omar Mateen at Pulse before—with one witness even saying Mateen had been there at least a dozen times. He returned early Sunday morning, opening fire in a shooting that left 49 victims dead and 53 wounded.

“Sometimes he would go over in the corner and sit and drink by himself, and other times he would get so drunk he was loud and belligerent,” Ty Smith told the Sentinel. “We didn’t really talk to him a lot, but I remember him saying things about his dad at times … He told us he had a wife and child.”

The FBI is looking into reports that Mateen had visited gay clubs previously, and officials are also investigating whether Mateen had tried to communicate with Pulse patrons on gay dating apps, NBC News reported.

Cord Cedeno, a Pulse customer, told MSNBC that he recognized Mateen from Grindr, a dating app for gay and bisexual men. Cedeno also said he had seen Mateen at the club before.

“That’s not his first time there,” Cedeno said. “He’s been there several times. I know that for a fact.”

In an interview with the Guardian, Mateen’s father denied that his son was gay. “It’s not true,” he said. “Why, if he was gay, would he do this?” 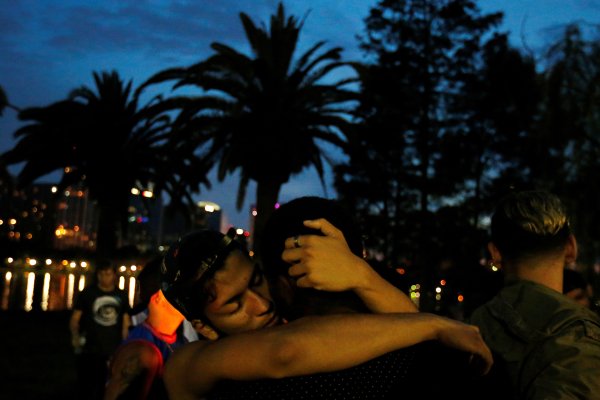 An Open Letter to Omar Mateen from a Survivor of the Orlando Nightclub Shooting
Next Up: Editor's Pick