Is There a Smart Military Answer to the Orlando Shooting?

An F-18 readies for launch against ISIS from the USS Harry S. Truman in the Mediterranean Sea June 8.
Navy photo / Bobby J. Siens
By Mark Thompson

The military challenge posed by a mass killer pledging allegiance to the Islamic State is pretty straightforward: there isn’t a whole lot armed force can do to combat it. That’s the essential conundrum of terror: it is a tool of the weak, asymmetrically aimed at the strong and powerful.

Many Americans’ initial reaction to the slaughter of 49 in an Orlando nightclub over the weekend was to bomb the Islamic State into oblivion. Shortly before police killed him, Omar Mateen, 29, reportedly said he was carrying out his carnage on behalf of ISIS leader Abu Bakr al-Baghdadi.

“The only real solution is to destroy Islamic State in its havens abroad so that young Muslims around the world won’t see it as a vanguard of the future,” the Wall Street Journal said in its lead editorial Monday. “Part of President Obama’s legacy will be that Islamic State grew so dangerous on his watch, prospering in the political vacuum that was created when he chose to withdraw from Iraq and then do little in Syria.”

That’s something for historians to debate. But pressure to step up attacks on ISIS will only grow if other lone wolves emulate Mateen’s murders. Even military veterans are divided on just how much armed force can do to defeat ISIS. “We need to change our leaders, change our laws and fight,” says Ralph Peters, a retired Army lieutenant colonel. “This is zero-sum warfare, civilization against fanatical barbarism, and we continue to underestimate the barbarians.”

But while military action is necessary, it isn’t sufficient, cautions retired Army three-star general David Barno. “Much like al Qaeda, ISIS spews an ideology of extremist beliefs, hate and destruction that in all likelihood cannot be destroyed by military means,” says Barno, who commanded U.S. and allied troops in Afghanistan from 2003 to 2005. “That reality makes our military actions against ISIS necessary, but not sufficient to destroy this deadly phenomenon.”

In New Hampshire, Donald Trump, the presumptive Republican presidential nominee, said the Obama Administration’s “current politically correct response” hampers the nation’s ability to grapple with ISIS. He declared that, if elected, he would give “our intelligence community, law enforcement and military the tools they need to prevent terrorist attacks. They don’t have those tools now,” he added, without elaborating. In Cleveland, Democratic presumptive nominee Hillary Clinton said “we should keep the pressure on ramping up the air campaign,” which shouldn’t be hard to ramp up: according to the most recent data published by the Pentagon, the number of weapons used against ISIS peaked at 3,227 last November and dropped to 1,982 in March—a decline of nearly 40%. While the self-declared caliphate occupied by ISIS in Iraq and Syria continues to shrink, its existence keeps it a potent recruiter for jihad.

The U.S. and its allies could do more to destroy ISIS, ranging from increased air attacks to putting troops on the ground. But the Obama Administration, leery of being sucked anew into another war in the region, has embraced a steady but modest air war against the Islamic State instead. “If investigators conclude this was an act of terror directed or inspired by ISIL,” Defense Secretary Ashton Carter posted to his Facebook page (using the U.S. government’s preferred term for ISIS), “it will only steel our resolve to defeat this depraved enemy, prevent the spread of its hateful ideology, and defend our people.”

Steeling our resolve—this time, really, we mean it—is, of course, a lot different than putting steel on target. Hours after Carter’s statement, the Pentagon detailed, as it has done pretty much every day for nearly two years, the 32 strikes against assorted ISIS targets it had conducted over the prior 24 hours. Manned and unmanned aircraft took out, among other targets, a pair of oil wells, a light machine gun, a front-end loader and a “cave entrance” in Syria. In Iraq, U.S.-led air attacks “denied ISIL access to terrain … suppressed an ISIL mortar position … suppressed an ISIL machine gun position … and suppressed a separate ISIL tactical unit.” No matter it’s tallied, this is not a bombardment for the record books.

The challenge for Obama and his successor is to come up with a battle plan that punishes ISIS more forcefully while sustaining the support of the American people. Maintaining that balance can be difficult. Congress has been so fearful of getting its hands bloody that it has refused to pass a resolution explicitly authorizing war on ISIS. Young Americans are risking their lives every day under a congressional resolution passed a week after the 9/11 attacks to go after al Qaeda, Osama bin Laden and the Taliban government of Afghanistan that shielded them.

The danger is that if more such lone-wolf attacks occur, the political pressure to strike ISIS harder may eclipse the military utility of such a move. As every military strategist know, bullets can’t kill an idea, no matter how foul. “Airstrikes will not destroy the ideology of ISIS, which seems right now to be what motivated the Orlando terror attack,” Barno says. “Rejecting the violent radical ideology of ISIS and al Qaeda will have to ultimately come from within the Middle East and its people, not simply from the West.” 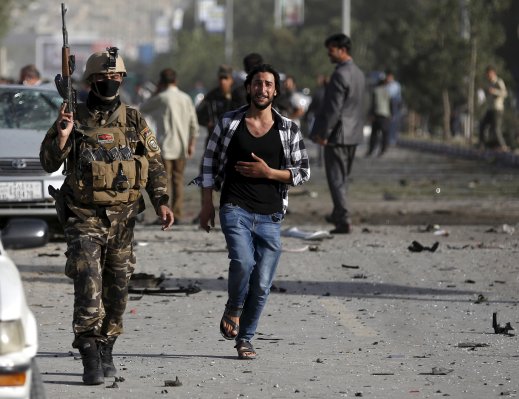