Pastor Paula White was praying early Sunday morning before her church services began when she got the text that there had been a massive shooting at a gay nightclub twenty minutes away. She immediately called her senior staff for a meeting and texted city officials, including the mayor, to let them know that her church would be there for the community in any capacity she could.

A few hours later, she got another message, this time from Donald Trump’s campaign manager, asking what Trump could do to help.

White is the senior pastor of New Destiny Christian Center, a 10,000-member congregation in Apopka, northwest of downtown Orlando, and one of the largest churches in the area, representing some 50 nationalities. She also is a longtime friend of Trump, and has been working behind the scenes to support his presidential campaign’s faith outreach efforts.

Corey Lewandowski reached out to White on Trump’s behalf between New Destiny’s morning worship services. White has known Trump for 14 years—they met after he reached out after seeing some of her sermons on television, and she has helped to organize meetings for Trump with evangelical and televangelist leaders. Lewandowski asked how her church was, how she was, how the city was, and what Trump could do to help, White says. He even offered the possibility of Trump visiting.

“‘He’ll be there if you need him to for a prayer vigil,’” she says, quoting Lewandoswki. “It was not, what can we do for political advantage, it was what can we actually do,” she adds. “His call to me was genuine concern, care and compassion.”

White promised to keep him informed as the crisis progressed, and Lewandowski kept in touch through the day. New Destiny Christian Center plans to be open 24 hours a day for the next three days for a time of fasting and prayer. White says she did not see Trump’s controversial tweets on Sunday where he said he appreciated “the congrats for being right” on terrorism. “We are a very open-door policy,” she says. “The bottom line is there is a crisis in our city, and there are hurting people.”

As the day progressed, White sent some of New Destiny’s ministers down to ground zero, as well as Spanish and Hindu interpreters, at the request of city officials, she says. After services many church members joined the lines to donate blood. White also plans to offer to host memorials or funerals for victims if families ask.

She also reached out to Tim Clinton, president of the 50,000-member American Association of Christian Counselors, with whom she has been working behind the scenes to form a more official faith advisory committee for Trump. He mobilized a set of counselors and trauma experts trained to work in terrorist situations and with children, White says.

Separately, the Trump campaign scheduled—and then canceled—a prayer time planned for Monday evening in New Hampshire. Trump surrogate pastor Mark Burns of Easley, South Carolina, told TIME on Sunday that Trump’s campaign reached out to him after the shooting to have him lead a prayer in Portsmouth on Monday evening. Official campaign language referred to the event as a campaign rally, but Burns says the prayer time would replace campaigning.

“I’m thankful that Mr. Trump is sensitive to this horrible American crime that he has saw fit to pause from campaigning to pray for the victims and their families,” Burns says.

The Trump campaign later issued a statement canceling the rally “due to the horrific tragedy that has just taken place in Orlando.” 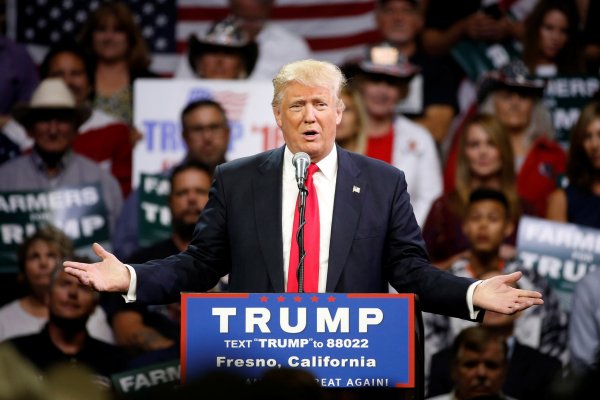 Donald Trump Faces Backlash for Tweets About Orlando Shooting
Next Up: Editor's Pick