Hillary Clinton on Orlando Shooting: 'Weapons of War Have No Place on Our Streets'

Hillary Clinton expressed solidarity with the LGBT community and called for stricter gun control measures Monday in the wake of the Orlando shooting.

Speaking in Cleveland just one day after the deadliest mass shooting in U.S. history, the former Secretary of State said that “weapons of war have no place on our streets,” referencing the AR-15-style rifle used in the attacks in Orlando, San Bernardino and Sandy Hook. She also called for further restrictions on who can purchase a gun.

“If the FBI is watching you for suspected terrorist links, you shouldn’t be able to just go buy a gun with no questions asked,” she said. “And you shouldn’t be able to exploit loopholes and evade criminal background checks by buying online or at a gun show. And yes, if you’re too dangerous to get on a plane, you are too dangerous to buy a gun in America.”

Clinton also called for defeating ISIS abroad and strengthening defenses against radicalization in the United States.

She then expressed her support for the gay and lesbian community, which was targeted in the Orlando attack that took place at a gay bar. “To all the LGBT people grieving today in Florida and across our country, you have millions of allies who will always have your back, and I am one of them,” she said.

Although the presumptive Democratic nominee opened her speech by saying, “Today is not a day for politics,” she later criticized Donald Trump’s policies without invoking his name.

“Threatening to ban the families and friends of Muslim Americans as well as millions of Muslim businesspeople and tourists trying to enter our country hurts the vast majority of Muslims who love freedom and hate terror,” she said, referencing Trump’s 2015 call to ban Muslims from entering the United States. “So does saying that we have to start special surveillance on our fellow Americans because of their religion,” she continued, invoking another Trump plan. “It plays right into the terrorists’ hands.”

President Obama spoke before Clinton on Monday, saying that there is “no clear evidence” that shooter Omar Mateen was part of a larger terrorist plot. “This an example of the kind of homegrown extremism that all of us have been so concerned about for a very long time,” Obama said.

Early Sunday morning, Mateen opened fire in Pulse, a gay nightclub in Orlando, killing 49 people and wounding 53. On Monday, Mateen’s father said he does not forgive his son, who was killed in a shootout with police after the attack.

Correction: The original version of this story incorrectly described the gun used in the Orlando shooting. It was a Sig Sauer MCX, a semiautomatic assault style rifle that is similar in appearance and capabilities to the better-known AR-15. 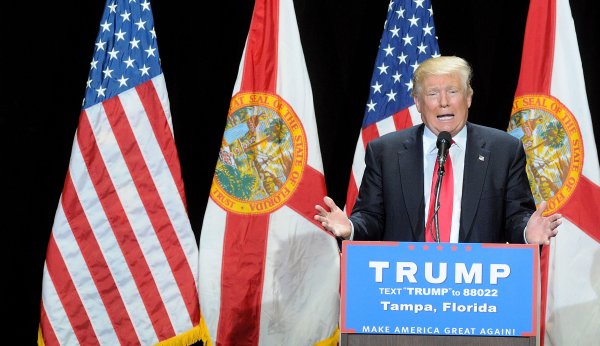 Watch Live: Donald Trump Addresses Terrorism in the Wake of Orlando Shooting
Next Up: Editor's Pick