How I Met Your Mother: Everything You Need to Know Before the Finale

After nine seasons of waiting for Ted to finish telling his kids how their parents met, fans of How I Met Your Mother will get the answer tonight, when the sitcom’s much anticipated hour-long finale airs on CBS. But after so many years, there’s no reason to be ashamed if you missed a plot point or two.

In order to make the finale go down easier, here’s everything you’ll need to know to understand what you’re watching:

Who are these people? If you’ve actually never seen the show before and don’t recognize the main characters — Ted, Robin, Barney, Lily and Marshall — it’s too late for you. If you’ve just been a bit flaky this season, the cast list for the episode suggests that you won’t have much trouble with minor recurring characters. Cristin Milioti, the only regular who was new this season, is anything but minor: she’s the Mother.

When does this episode take place? This whole last season has taken place during the weekend of Barney and Robin’s wedding, with flashes both forward and backward. The couple said “I do” last week, so that leaves the reception.

What do we know about the Mother? Lots, by this point. She’s interacted with lots of the show’s side characters as she makes her way down a timeline that runs parallel to Ted’s, and has even met all of Ted’s friends. As for the setup for the big meeting, she plays bass in the band that’s hired to play at Barney and Robin’s wedding. Around the time that the show’s timeline began, her boyfriend died; after she began dating again, she met Louis, who would propose to her by the time the show neared its end. She said no and left him, in a Ted-like bid to find a truer love, which is why she’s staying at the Farhampton Inn the weekend of Barney and Robin’s wedding, in the room next to Ted’s, instead of at Louis’ house.

Wait, didn’t Ted already meet her? No. The show introduced the Mother at the end of its penultimate season and she’s figured heavily in this season, but only via her separate storyline (i.e., how she meets Ted’s friends before she meets him) and in flash-forwards to important moments like their first kiss and the proposal. The actual meeting is yet to occur, unless you count the time that she happened to be in a lecture hall when Ted came in and accidentally began teaching the wrong class.

What do we think will happen in the finale? He’ll meet the Mother, and fans will (if they’re lucky) get answers to some other big questions. (As for small questions, BuzzFeed has a pretty comprehensive list — what happened to Ted’s cowboy boots? — but pretty much no long-running show has ever tied up every loose end, so don’t get your hopes up.)

What are those big questions? We already know what’s in store for the core group of friends: Marshall and Lily move to Italy so she can follow her dream, and they name the baby Lily is expecting Daisy; Barney and Robin already got married in the penultimate episode. That leaves the Ted-centric quandaries. For example, he’s meant to be moving to Chicago but he appears, in flash-forwards, to be in New York. And then there’s the big one: is the Mother dead?

So, is the Mother dead? That’s a fan theory that’s been batted around for a while, the idea being that the reason Ted is telling this long story to his kids is that their mom isn’t around to answer those questions. There have been some big hints this season that it’s a possibility, and the show’s stars have deflected questions about the theory — suggesting it’s wacky but not saying 100% that it’s false — but pretty much everybody who cares thinks that would be a terrible way for the show to end. At this point, the show botching the dead-Mother angle is fans’ main worry.

How many slaps are left in the slap bet? Zero. How I Met Your Mother wrapped up one of its longest-running gags last week, when Marshall slapped Barney to get him to stop freaking out about the wedding, thus using up the slaps. (Marshall won the right to slap Barney in a Season 2 episode.)

What’s next? How I Met Your Dad. 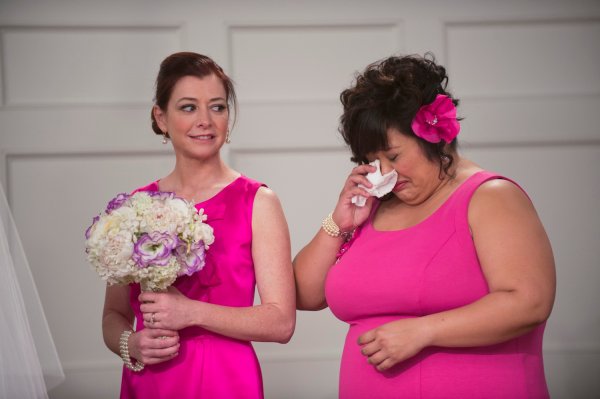