Hillary Clinton on Monday said she will not “demonize” the religion of Islam by using the specific phrase “radical Islam” when discussing the Orlando nightclub massacre after calls from Donald Trump to do so.

“In my perspective, it matters what we do, not what we say,” Clinton said. “To me, radical jihadism, radical Islamism, I think they mean the same thing. I’m happy to say either, but that’s not the point.”

“I’m not going to demonize … and declare war on an entire religion,” she added. “That’s just plain dangerous and it plays into ISIS’s hands.”

Trump, the presumptive Republican nominee, had slammed both Clinton and President Barack Obama for being “weak” for failing to describe the shooting as an act of “radical Islam.”

“In his remarks today, President Obama disgracefully refused to even say the words ‘Radical Islam’. For that reason alone, he should step down,” Trump said in a statement Sunday. “If Hillary Clinton, after this attack, still cannot say the two words ‘Radical Islam’ she should get out of this race for the Presidency.”

In a Today interview on Monday, the mogul again renewed his call for a ban on all Muslims entering the U.S. and reiterated his criticism against American leaders. “It’s insulting to our country that Obama doesn’t use the term radical Islamic terrorism,” Trump said. “He’s not addressing the issue, he’s not calling it what it is—radical Islamic terrorism.”

“Yes, there is a right for law-abiding, responsible Americans to own guns. And yes, there are reasonable common-sense measures to try to keep people safe from guns,” Clinton said. “We’ve got to figure out the best way to move forward on that.”

Both Clinton and Trump are expected to address the shooting in separate addresses Monday. 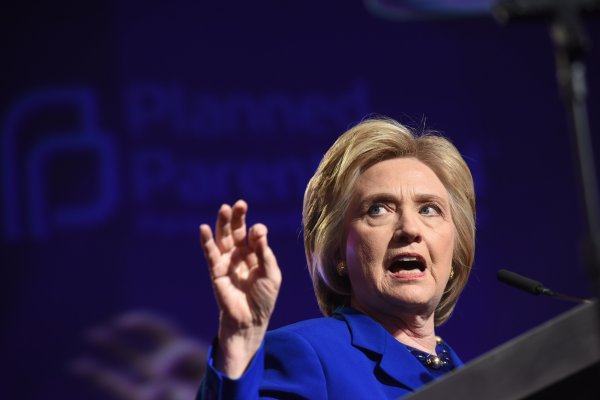