The rat-a-tat of gunfire blasted out in near-darkness, amid loud music coming from the club’s sound system—at first seeming like it was part of the show. Then, as clubgoers began dropping from a hail of bullets, the panicked crowds rushed to escape the bloodbath.

This could be a scene not just from the mass shooting in the Pulse club in Orlando early Sunday but also from the Bataclan concert hall in Paris last Nov. 13—an attack whose strong similarity to the massacre in Florida raise deeply worrying questions for officials and intelligence analysts.

The Orlando killings were different in one key respect, in that the suspect appears to have targeted a specific community of LGBT people rather than a random collection of concertgoers. Homophobic hatred may be a factor, as well as extremist ideology.

But in other respects, the two attacks were so strikingly reminiscent that some officials in both the U.S. and Europe see a connection of some kind, whether through specific ISIS guidelines, or through simply emulating an attack that brought mass casualties.

There is no information yet that Mateen modeled his attack after the Bataclan, which took place exactly seven months ago. But the similarities are unmistakable. In Paris, three gunmen claiming allegiance to the Islamic State, or ISIS, burst into the Bataclan, Paris’s iconic music venue, during a packed performance of the California band Eagles of Death Metal, and unleashed a volley of automatic fire in the darkness. A total of 89 died. In Florida, a New York-born man named as Omar Mateen opened fire in the Pulse club with automatic weapons, killing 49 people and wounding dozens more. He too had sworn fealty to ISIS before the attack, reportedly in a call to emergency services.

Just as Orlando was the U.S.’s worst mass shooting in modern times, so too the Bataclan massacre was France’s worst single attack in memory. The event was so traumatic that it spawned the term “The Bataclan Generation” to describe the previously carefree French youth who are now marked by tragedy. On its cover on Monday, Britain’s tabloid The Sun splashed below a photo of the Orlando massacre the words, “America’s Bataclan.“

“This is very, very similar to the attack on the nightclub in the concert hall in Paris,” House Intelligence Committee Chairman Devin Nunes (R.-California) told CNN on Sunday. “That is why it is critical right now in this juncture for the FBI and other law enforcement to quickly track down all possible leads to see if this individual is connected to any other terrorist nodes around the United States or elsewhere.”

It is not yet known whether Mateen had contact with terror groups, or whether his pledge of allegiance to ISIS was the sole connection he ever had to the organization. The group announced on Monday that he was “one of the soldiers of the caliphate in America,” but there’s no evidence of collusion.

Yet direct communication with ISIS almost does not matter. That is because both the Orlando and Bataclan massacres followed guidelines that ISIS has already made clear, about how its supporters could conduct mass murder in Western cities. Even before the Bataclan, ISIS had suggested an attack on a concert venue, according to one member arrested last summer. What is more, the Bataclan attack offered a living example to follow of a hugely successful attack that ISIS sympathizers could emulate.

“It could be a coincidence, but it is difficult to believe that someone who shared the ideology of ISIS and says he is acting in the name of ISIS would just be using the same modus operandi, just by chance. I don’t believe it,” says Claude Moniquet, a longtime agent for France’s external intelligence service DGSE, who now runs a private intelligence company in Brussels. “He was clearly planning to do the same kind of thing” as the Bataclan, Moniquet told TIME on Monday. “Because it works.”

Moniquet says the ISIS playbook for such attacks breaks up the operation into three distinct phases: An initial phase of mass shooting, “to kill as many people as possible before the arrival of security forces;” a second phase of retrenching with hostages while waiting for the police to arrive; and a final phase involving a shootout with security forces. “That was clearly the ISIS guidelines since 2014,” he says. “We know that is what they teach in their training camps.”

Indeed, French police uncovered that tactic months before the Paris attacks. Last August, they arrested a young Parisian, Reda Hame, shortly after he had returned home from a week’s combat training with ISIS in Raqqa, Syria. Hame told them that the group had instructed him to open fire in a crowded music club or auditorium: A location where hundreds of targets would be grouped together tightly, unarmed and off guard. Three months later, that exact attack unfolded in the packed auditorium of the Bataclan.

A victim of an attack at the Bataclan music hall lays dead outside the theater, Paris, Nov. 13, 2015. Eighty-nine people were killed in that attack, one of several throughout the night across Paris that killed 130.
Jerome Delay—AP

There are another similarity between Orlando and the Bataclan: The attackers themselves. Like Mateen, all three Bataclan attackers were born and raised in the West—France in their case—as the sons of immigrants from conservative Muslim countries, familiar with the patterns of their own generation. Perhaps different from Mateen, the Bataclan attackers were part of a broader ISIS network that spent months planning the Paris attacks, in part because Europe’s far tighter gun-control laws complicated their plans; in total 130 people died in the November 13 assault.

Now comes the question of how to prevent another Orlando, and another Bataclan—a hugely difficult challenge for law enforcement in both the U.S. and Europe.

In Europe, just as in the U.S., terrorist attacks on crowded places like the Bataclan have sparked furious debates over gun control. The E.U. Parliament is set to vote next month on whether to introduce a blanket ban on semi-automatic and automatic weapons in the 28 member nations—a proposal introduced after the Paris attacks. Although European gun-control laws are already far stiffer than in the U.S., with extensive background checks required, the proposals has deeply divided the parliament, with some delegates saying the E.U. has failed to crack down on the extensive networks of illicit arms smugglers.

Whether the law passes, dark crowded nightclubs will remain extremely difficult to secure properly against attackers—a fact ISIS seemed to know, in planning how to wage attacks in the West. “I don’t see any possibility to really protect these kinds of places,” Moniquet says. “And even if you do, the threat will just move.” 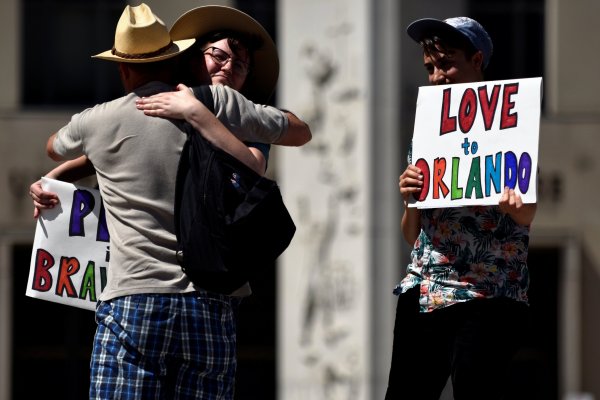 Pride Festival in Nation's Capital Takes on Somber Tone
Next Up: Editor's Pick