Hamilton creator and star Lin-Manuel Miranda made a statement while accepting the Tony Award for Best Original Score (Music and/or Lyrics) Written for the Theatre category. “I’m not freestyling, I’m too old,” he told the crowd. “I wrote you a sonnet instead.” What followed was a beautiful poem, honoring his wife Vanessa and the victims of the mass shooting in Orlando, Florida that took place early Sunday Morning at a gay club.

“We chase the melodies that seem to find us until they’re finished songs and start to play,” he said. “When senseless acts of tragedy remind us that nothing here is promised, not one day.”

He continued, “This show is proof that history remembers/ We live through times when hate and fear seem stronger/ We rise and fall and light from dying embers remembrance that hope and love last forever.”

Earlier in the Tony Awards, host James Corden also honored the victims of the Orlando shooting. “Hate will never win,” he said in pre-taped remarks before the show began.

Hamilton is nominated for 16 Tony Awards; a full winners list can be seen here. Read Miranda’s sonnet in full: 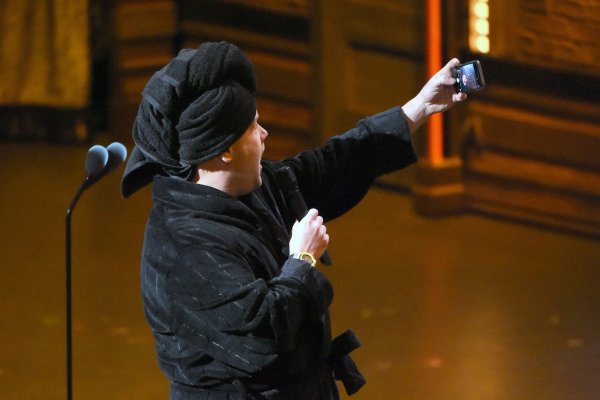 The Complete List of 2016 Tony Award Winners
Next Up: Editor's Pick