The cell phones rang hauntingly inside the bloodied and ransacked nightclub. Hours had passed since the deadliest mass shooting in U.S. history, and family members waiting for news of their loved ones’ fates had little to do but to call and call — and wait.

They waited in anguish, hundreds of them, family members and friends, gathered at a Hampton Inn just blocks from the nightclub where a gunman had opened fire early that morning. With 50 dead and even more injured, the best possible outcome for many was to find out their loved ones were grievously wounded.

Noelia Santiago and her husband Adrian were awaited news about her nephew, Luis Wilson, 38, who was at the nightclub with friends. “There’s a lot of mothers, aunts, sisters, everybody is waiting,” she said, fighting back tears. “The room is so crowded and it’s hot and we have no news. It’s going crazy in there.” Adrian Santiago said they were frustrated by the slow pace of information. “They are supposed to brief us at 3:30, then 4, then 4:30, and now it’s 5:30.” They had been waiting for news about Wilson since 8 a.m.

Blocks from the Pulse nightclub in Orlando, family members passed the time calling and calling their loved ones’ cell phones. A law-enforcement official said the calls were ringing through the grim crime scene. Some went direct to voicemail, as though they ran out of power.

Volunteers and hospital employees distributed water and food to those waiting, as pastors and grief counselors milled through the crowd. By midday, police and hospital officials had compiled a list of nearly all of the injured, and for the waiting families and friends, hope began to fade.

At 5:30 p.m., two doctors from the hospital arrived, with an updated list of names admitted to their institutions. Cries were audible from the sidewalk outside, and volunteers called for EMTs to attend to at least one bereft family member. Dozens of mourners emerged from the hotel hugging each other in the parking lot and sobbing as they updated family and friends on the phone. The despondent family member of one victim shouted at the sky, “Por que?” — “why?” — as friends and volunteers held and consoled him. Giovanne Gotay, 26, was hoping for word on his cousin and a co-worker. After hours of waiting, he heard his co-worker was in one of the hospitals in critical condition. His cousin is still missing — he presumed dead.

Officials had carried out next-of-kin notifications for eight victims by Sunday evening. For many more family members, the wait will continue until at least Monday morning, as police and medical officials said they won’t have further updates on the status of the missing until 10 a.m. Monday.

Family members expressed shock and frustration that it was taking so long to identify victims. “It’s more important for a honcho to get behind the microphone before the families that are over there learn about the loved ones,” said a visibly frustrated Jaime Leon.

Baron Serrano had been waiting for news on his brother Juan Rivera since 3 a.m. Sunday. He wasn’t listed on the rosters of those admitted to a hospital, categorized by the criticality of their injuries. “That doesn’t mean the worst,” he said. “There are two options. He’s unidentified in a hospital or he’s still in there. The second one, I don’t believe that. I have faith. I have hope.”

Anthoiny Esmuriaa, who visits the Pulse nightclub almost every Saturday but skipped this week, said he has one friend injured and three or four more missing. “We are just sitting and waiting,” he said. “We are all in shock. 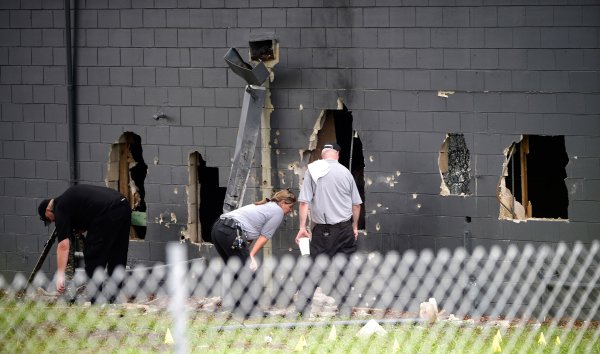 Pulse Owner Calls Orlando Nightclub a 'Place of Love and Acceptance'
Next Up: Editor's Pick