What to Know About ISIS's Role in the Orlando Shooting

ISIS claimed responsibility for the mass shooting attack in an Orlando gay club on Sunday that left at least 50 people dead.

“The attack that targeted a nightclub for homosexuals in Orlando, Florida, and that left more than 100 dead and wounded was carried out by an Islamic State fighter,” the group said in a report on its official Amaq news agency. The message was attributed to an unnamed “source” and distributed over the Telegram messaging app on Sunday afternoon. On Monday, an ISIS-run radio station also labeled the man identified as the shooter, Omar Mateen, as “one of the soldiers of the caliphate in America.”

The claim comes after law-enforcement officials quoted by multiple news organizations, including NBC News and the New York Times said the suspected shooter, Omar Mateen, called 911 before the attack in order to swear his allegiance to ISIS. Speaking at a news conference in Orlando on Tuesday afternoon, an FBI official confirmed that Mateen had made a call to 911, but did not indicate the content of the call. A security company, G4S, said Sunday that Mateen had been employed there since 2007, adding that it was “shocked and saddened” by the shooting. “We are cooperating fully with all law-enforcement authorities,” the company said.

The claims underline a pattern in which ISIS seeks to inspire sympathizers to carry out attacks — with or without operational support from the group — and then claims responsibility for the carnage after the fact. In such plots, the connection to ISIS as a central organization may exist only in the attacker’s mind, but the resulting violence is no less lethal.

Declarations of allegiance to ISIS and its leader Abu Bakr al-Baghdadi have been a hallmark of past attacks by jihadist sympathizers, including the San Bernardino, Calif., shooting in December. One of the two shooters in the Garland, Texas, shooting in May 2015 indicated support for ISIS in a post on Twitter just before the attack.

The mass shooting at the Pulse nightclub on Sunday came weeks after a top ISIS official issued a call for attacks throughout the world during the Islamic holy month of Ramadan, which began on June 6.

In an audio recording released on May 22, ISIS spokesman Abu Muhammad al-Adnani called for “a month of calamity everywhere for the non-believers,” saying his appeal was “especially for the fighters and supporters of the caliphate in Europe and America.”

In the recording attributed to al-Adnani, he specifically focused on ISIS supporters who are no longer able to reach ISIS-held territory in Iraq and Syria and join the so-called caliphate. The message seems geared toward inspiring “lone wolves” — attackers who are inspired by ISIS but may have no organizational ties with the group whatsoever.

Read More: What to Know About the Pulse Club Gunman

“The smallest action you do in their heartland is better and more enduring to us than what you would if you were with us. If one of you hoped to reach the Islamic State, we wish we were in your place to punish the Crusaders day and night,” Adnani was quoted as saying.

Ramadan — a holy month of dawn-to-dusk fasting, prayer and reflection — is observed by Muslims worldwide. But militant groups including both ISIS and al-Qaeda have used Ramadan as a pretext to ramp up attacks and gain attention. A recent report from the Washington-based Institute for the Study of War argues that ISIS is seeking to use Ramadan “as an occasion to reorient its strategy” with attacks both in its core arena of operations in Iraq and Syria and abroad.

“This year, ISIS will likely take action to reverse serious losses in Iraq and Syria while expanding its attacks against the non-Muslim world in an attempt to spark an apocalyptic total war,” the report states.

ISIS, which seized huge sections of territory in Iraq and Syria in 2014 and declared a caliphate, is currently giving ground on multiple fronts. In recent months it has lost key cities in Iraq and faces a new offensive by the Iraqi military and allied militias in the city of Fallujah. In northern Syria, near ISIS’s de facto capital in the city of Raqqa, the group is also battling an offensive by U.S.-backed pro-Kurdish forces. As it loses ground on the battlefield, analysts say ISIS may use spectacular acts of terror as a way of seizing headlines and regaining the initiative in the eyes of its supporters.

In Iraq, ISIS accelerated attacks on civilians in the weeks leading up to Ramadan, and on June 9, the group claimed responsibility for a pair of suicide bombings that killed 31 people in Baghdad. On May 17, a triple bombing in Baghdad killed at least 77 people.

Statements by government officials have also fueled speculation that the Orlando shooting could have been carried out in connection with or out of sympathy for ISIS.

At a news conference in Orlando, FBI assistant special agent in charge Ron Hopper confirmed that the alleged shooter, Mateen, 29, had been investigated by federal authorities over possible militant ties in 2013 and 2014, but that the investigations had been inconclusive. Mateen, a U.S. citizen born in New York to Afghan parents, was killed when police raided the club in response to the shooting.

Earlier on Sunday, Representative Adam Schiff of California, the top Democrat on the House Intelligence Committee, told CNN that security officials had informed him that him that the shooter had proclaimed his allegiance to ISIS. “What I’ve heard from the Department of Homeland Security this morning is that, according to local police, he made a pledge of allegiance to ISIL,” he said. Speaking from the White House on Sunday afternoon, President Obama said the shooting was being investigated as an act of terrorism. “This was an act of terror and an act of hate,” he said.

Other evidence about Mateen also points to personal bigotry as a possible motivation. In an interview with NBC, Mateen’s father said that Mateen “got very angry” after he saw two men kissing in public. “This had nothing to do with religion,” said the father, Mir Seddique. In an interview with the Washington Post, the suspect’s ex-wife said Mateen was abusive, mentally unstable and not overly religious. “He was not a stable person,” the ex-wife is quoted as saying.

In addition to its record of mass violence toward women, religious minorities, other Muslims and civilians everywhere, ISIS has a history of brutality toward people accused of homosexuality. Among many other restrictions on civilian life, the jihadists’ ultraconservative penal code criminalizes sodomy, a law it has been known to enforce in extreme fashion. In January 2015, the group published graphic images appearing to show ISIS officers executing men accused of sodomy by shoving them off a high-rise building in northern Iraq. 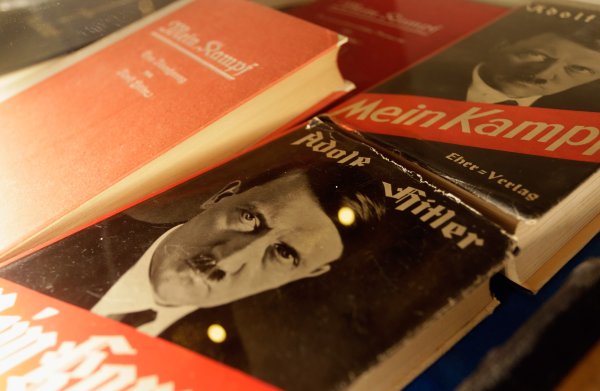