Ralph Nader: It Ain’t Over Til It’s Over for Bernie Sanders

Democratic presidential candidate Sen. Bernie Sanders and his wife Jane Sanders arrive at a campaign rally in San Francisco on June 6, 2016.
Noah Berger—AP
Ideas
By Ralph Nader
Nader, a consumer advocate, ran for President four times and is the author of How the Rats Re-Formed the Congress.

Quo Vadis, Senator Bernie Sanders? For months Sanders has scored higher in the national polls against Donald Trump, than Hillary Clinton, highlighting some of her drawbacks for the November showdown. Yet, with one primary to go next Tuesday in the colony known as the District of Columbia, the cries for him to drop out or be called a “spoiler,” are intensifying. Don’t you understand that you have been vanquished by Hillary? You must endorse her to unify the party.

No, Bernie has other understandings beyond his principled declaration in speech after speech that his campaign is going all the way to the Democratic Party Convention. Between the June 14th D.C. Primary and the July nominating convention, lots can happen. As Yogi Berra said, “It ain’t over till it’s over.” (The run-up to the primary is a perfect time for Sanders and Clinton to forcefully advocate for DC Statehood.)

Like Trump, Hillary has imploding potential. Her email troubles are under Justice Department investigation and revelations are still bubbling. The smarm surrounding the Clinton quadrangle of Bill’s huge speech fees, mining and other magnates securing concessions in foreign dictatorships, the role of the State Department and giant gifts to the Clinton Foundation continue to surface. Also intriguing is the fact that Hillary continues to stonewall any public disclosure of the transcripts, contractually in her exclusive possession, of her $5,000-per-minute, closed-door speeches to big banks and other industries.

But Bernie has other core reasons for not dissipating his bargaining power by descending to the bended-knee posture of a toady. He has to keep his supporters focused and hoping. The sure alternative, should he drop out, is a huge howl of outrage, followed by splintering of his voters—some to Trump, others to Hillary, still others staying home in cynicism and withdrawal. Such chaos and rage will not be good for Hillary. She needs Bernie’s voters in an electoral college, winner-take-all system.

Maintaining the solidarity of Bernie’s voters increases the seriousness with which his drive to change the rules, rigged against insurgents, in the Democratic Party, led by the unelected cronyism of the Superdelegates, comprising nearly 20% of the total delegates. Sanders’s triad of protections for workers, students and patients, coupled with squeezing the unearned profits of Wall Street for a wide public works program, needs more visibility. Political Parties should be about serious subjects. Voters want to replace some of the tedious convention hoopla with some authenticity. Perhaps Senator Sanders could also urge Hillary Clinton to choose a running mate who would be more substantive and not just a tactical choice or an obeisant person. The pundits marvel at his ability to reject PAC money and raise millions from a large pool of small donors, with contributions averaging around $27—self-imposed campaign finance reform. The Chattering Class should also be impressed with how strongly Sanders’s message has resonated with the electorate.

Granted, platforms have not been worth the paper they are written on. But that is because little in them is worth their paper. The Democratic Party’s cautious monoculture had nothing to invoke as standards for subsequent political decision-making. Sanders brings political directions, often backed by a majority of the American people, that win or lose can become the legacy for a post-convention non-partisan citizen movement. Who better to expand the energy than this remarkable, uncharismatic, scandal-free Senator from a small, once safely Republican state?

There are still lessons that Sanders can teach the decadent corporate Democrats for whom this 2016 campaign may be their last hurrah. It is called political energy. It is the lack of political energy that explains why the Democratic Party, year after year, cannot defend the country from the worst Republican Party, on its own record, in Congressional history. It is political sectarianism that explains why the Democratic Party, with majoritarian issues at hand, has not landslided the Republican Party that votes for many bills which often register support under 30% in the polls. It is this absence of political energy, seduced by big money in politics, that the Sanders youth movement is aiming to topple. The Sanders people understand that breaking the momentum breaks the movement. That is why the longer range rebound of Bernie Sanders, right after Labor Day, must be mass non-partisan civic mobilization rallies driven by reforms and redirections that are for the people at large. That such class-levelling, peace-waging, freedom to participate in power for a more just society may benefit the Party’s electoral prospects is a collateral benefit from a galvanizing civil society.

Bernie can start this fundamental movement for a functioning democracy with a massive rally on the National Mall in Washington, D.C. and then take it regionally and locally. All along this march can make the faces of preventable injustice visible. New leaders to improve and deepen Bernie’s agenda will step forward and the whole will become greater than the sum of its parts. Ready solutions for the good life and its possibilities will come off the shelves as people—both left and right together—begin to realize what is meant by our Constitution’s sovereignty of the people over political and corporate rulers.

That a long-time, lone-ranger Senator can get this far is a tribute to his focus on widely-felt, repressed priorities. His candidacy is contrasted with the avarice of the plutocratic/oligarchic corporate state. This dominant corporatism possesses few loyalties to country and community other than to control them while treating the workers’ economy with disinvestment and unbridled globalization.

Both Presidents Franklin Delano Roosevelt and Dwight Eisenhower warned their fellow Americans about this subordination of our government to big business and its impact on our liberties and livelihoods.

Perhaps the sonorous “feel the Bern” call at Sanders’s gigantic rallies around the country has its echoes in those similar warnings by these leaders—one Democrat and one Republican—coming from their experience during the Great Depression and World War II. 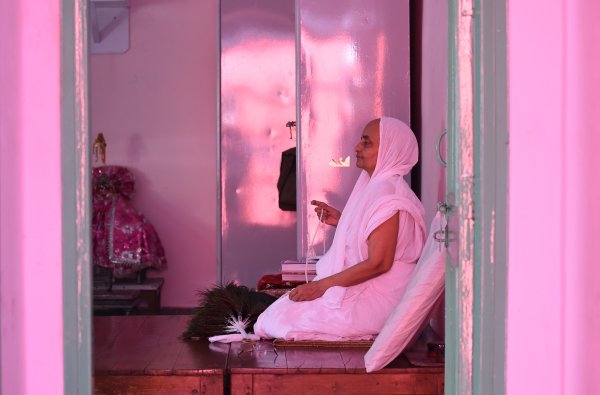 What One of India's Oldest Religions Teaches Us About Dying
Next Up: Editor's Pick