It’s been more than 30 years since we met Harrison Ford’s Indiana Jones in Raiders of the Lost Ark, but the actor says that the franchise’s theme music still follows him wherever he goes.

According to E! News, during a speech honoring the theme’s composer, John Williams, at the American Film Institute Life Achievement gala, Ford had plenty of jokes about his situations he’s found himself in where people play the song — from awards shows to on the street.

“That damn music follows me everywhere. They play it every time I walk on stage, every time I walk off a stage. It was playing in the operating room when I went in for my colonoscopy,” the 73-year-old actor said. “I was walking down a crowded street in New York a couple of months ago and there was a big fire truck stuck in traffic that I passed in the opposite direction,” he continued. “Some guy leaned out of the cab and gave me one of those [Ford makes a groaning noise]. By the time I got to the end of the truck that music was blaring out of the loud speakers in the truck!”

Ford ended his speech with a salutation to Williams, who has won five Oscars from 50 nominations for works including Jaws, Star Wars, and Harry Potter.

“To play a character graced by John’s music, of course, is a real gift,” Ford said. “Music is the spice, it’s the salt and pepper in every film recipe that brings the whole thing together.” 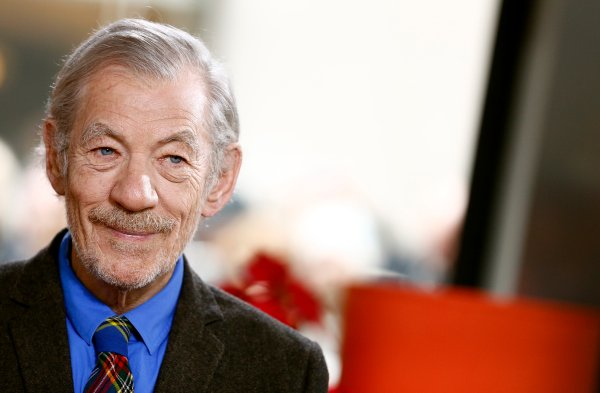 Ian McKellen: If You Care About LGBT Rights, Don't Vote for Brexit
Next Up: Editor's Pick