In Instagram’s early days, few photographers realized the photo-sharing platform’s full potential. Often, it was used as an alternative portfolio or a way to keep your followers up to date on your day to day photo musings. But as Instagram has grown – it announced 500 million users last month – it has become, for some, an opportunity to work on commercial shoots where posting on their own Instagram feeds is part of the deal.

TIME LightBox spoke with five photographers who are leveraging their followings.

Few photographers have been seamlessly incorporating Instagram into their business as long as Ketron has. When Instagram-based assignments began emerging around three years ago, Ketron says it was initially with travel companies in exchange for lodging and airfare but has grown to bigger budgets as its value as an advertising tool has increased. She cautions photographers that “it’s a big ego boost to have companies approach you, but be weary of accepting the handouts in exchange for money to avoid undercutting the market.”

For Pfizer’s campaign, Ketron and four other photographers, including Steve McCurry, each took a day-in-a-life approach to documenting the lives of breast cancer patient as part of a push to highlight misperceptions surrounding metastic breast cancer. Ketron’s work was posted to her feed with the “Story Half Told” tag instead of a direct mention of the brand’s name.

For the past few years, Stephanie Calabrese has brought in a group of photographers to shoot the UPS campaign for the holiday season. This included documentary photographers like Ed Kashi, allowing the images to reach an audience UPS normally would struggle to reach.

For the sake of efficiency the photographers shot some of the content on their phones. Calabrese appreciated being able to “move more fluidly with the subjects,” she says. “I could easily switch between videos and stills. It allowed me to move a lot faster. I could begin processing the images on my device that night.”

The images were initially posted on the photographers feeds as part of the campaign after an internal review process from UPS.

Jensen doesn’t put much of his ad work on his feed but the work he did for Apple made it to his feed because “I was really proud of that,” he says. Usually, a contract will stipulate uploading between two and four photos within a 24 hour window, with the companies then posting the work on their own feeds as they see fit.

Jensen feels that a large Instagram following is becoming essential for advertising photographers. “Good work will always get recognized but unfortunately in the world we live in right now the first thing brands look at is your Instagram following,” he says. That can be problematic, he adds, as it could push photographers “to shoot what they think brands want to see. Fortunately or unfortunately, it’s something I feel all contemporary photographers need. As much as I love the purist approach, but to be a working photographer these days you sort of have to be on social media.”

Ozer is one of the most popular professional photographers on Instagram with a following of 658,000 people. He has posted to his feed during campaigns for Victorinox Swiss Army, Stella Artois and Land’s End and he’s represented by Tinker Street, an agency that specializes in “influencers from the mobile community.”

Ozer does not downplay the importance of his following in his success. “I owe my career in a lot of ways to Instagram, because it gave me a lot of exposure which is hard to do as a commercial photographer,” he says, attributing some of his success to the current trend towards a photographic style that feels more natural and realistic. However, he adds, this trend has been going on for a while and he now predicts a shift away from the size of a photographer’s following in favor of personal ability.

Lauren Randolph, who goes by Lauren Lemon on Instagram, has experienced the shift in “acceptable” content firsthand. When she started posting her professional work she received very negative feedback from her followers who feared she was selling out, despite her having shot ad campaigns long before she began posting on the platform. Now, however, followers are more likely to be excited about the brands she teams up with. Randolph finds the key is to explicitly state when her work was shot on assignment, often using phrases like “excited to be working with” or “collaborating with.” But, she feels it is important to maintain a healthy balance between personal and paid work.

As a well-known influencer, Randolph often turns down social media agencies looking to place a product in her images. Instead, she prefers to produces a larger body of work that she is genuinely proud to share with her following. With Disney, she helped launch the hashtag #DisneySide to encourage Instagram users to post their own images. 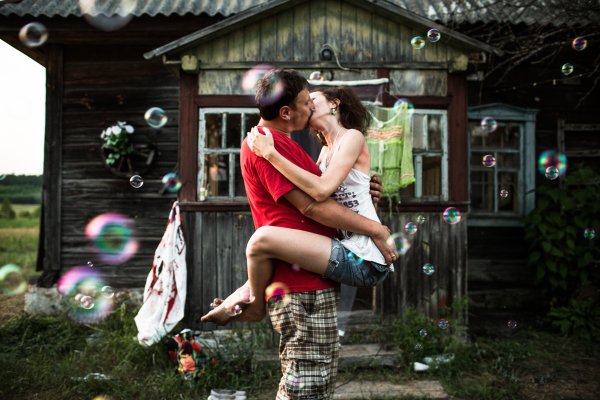 Coming of Age in the Shadow of Chernobyl
Next Up: Editor's Pick