Supporting Trump Is a Form of Victim-Blaming

Khan is a writer focused on race, religion and politics in the U.S., and Cook is a psychologist and associate professor at Yale University and an Op-Ed Project Public Voices Fellow.

Now that Donald Trump is the Republican Party’s nominee, many continue to ask how we got to this point. An individual who has called Mexican immigrants rapists, justified his supporters physically assaulting Black Lives Matter protesters and has a long record of making misogynistic comments could become our next Commander-in-Chief.

Many, including President Barack Obama, have blamed the GOP establishment and the party itself. Certainly the Grand Old Party has some soul searching to do. But in truth, all of us do because the Republicans didn’t get here alone. Each of us, on an individual level, helped create the petri dish in which his candidacy was spawned, and we need to recognize that if we stand a chance at defeating him and his harmful ideology in the long-term. One of the most illustrative examples of our shared role is the way in which the country has allowed American Muslims to be characterized and treated for decades.

Hollywood and the media have played a role in our collective cultural race to the bottom. Scholar Jack Shaheen, who has chronicled how Muslims and Arabs have been demonized in American pop culture for the past century, recently said that the stereotyping today was worse than ever. “There was prejudice before … but this is bigotry.” A November 2015 analysis found that there was significant bias against Islam and Muslims in The New York Times that likely could lead the average reader to “assign collective responsibility to Islam/Muslims for the violent actions of a few.” It’s no surprise then that given this cultural milieu, a recent poll found 61% of Americans hold unfavorable views of Islam.

But the buck shouldn’t stop with political leadership or the media. Nor can we disavow Trump’s political ascent by labeling all of his supporters as racists or white supremacists. Former KKK leaders aside, you don’t have to be racist to hold racist views.

In the 1960’s, social psychologist Melvin Lerner theorized that a “belief in a just world” is what allowed otherwise compassionate individuals to rationalize an injustice they believed they could not stop or prevent. Essentially, people want to live in a world that is fair and orderly, where people get what they deserve. So when presented with a reality that flies in the face of that outlook, say calls to “patrol Muslim neighborhoods” as Ted Cruz suggested, we struggle to make sense of it. Often, in order to restore balance in our minds and maintain our belief in a just world, we blame the victim or find some other explanation that conveniently, but inaccurately, restores our sense of order. Interestingly, people who hold a just world outlook also tend to have favorable views of authoritarianism, a common trait found amongst Trump supporters.

Although most Americans identify as non-racist and reject race-based discrimination as wrong, researchers have repeatedly shown that many people hold implicit prejudices—immediate and unconscious bias against people who are racially or ethnically different from them. In tests that required people to match negative and positive words with black and white faces for example, people were quicker to match positive words with white faces and negative words with black faces. Patricia Devine, a professor at the University of Wisconsin, noted 80% to 90% of white people show this bias. A similar test found that while 25% of participants showed no bias towards or against Muslims, 50% had an automatic preference for non-Muslims. Given where we are collectively at an unconscious level, the fact that 51% of Americans now support Trump’s ban on non-citizen Muslims entering the U.S. is not that surprising.

So what can we do to push back on the intolerance around and within us? Be aware of your own implicit bias. One tool to help is Harvard’s Project Implicit, which allows you to test yourself on a number of potential areas of bias. Being aware of those biases and concerned about their effects can help start the internal shift so your actual beliefs can eventually match your stated beliefs. Once they’re aligned, you’ll be far more likely to take the next step and speak out in response to bigotry.

The theory of present bias suggests that people will take a reward today over a bigger long-term desire. Yes, many in this country profess to want a more equal America, one that doesn’t persecute its minorities. But in order to achieve and secure that vision, it means we have to forgo the easy silence of the here and now. If we don’t, then the silence of the majority that led to the Trump candidacy will only continue. 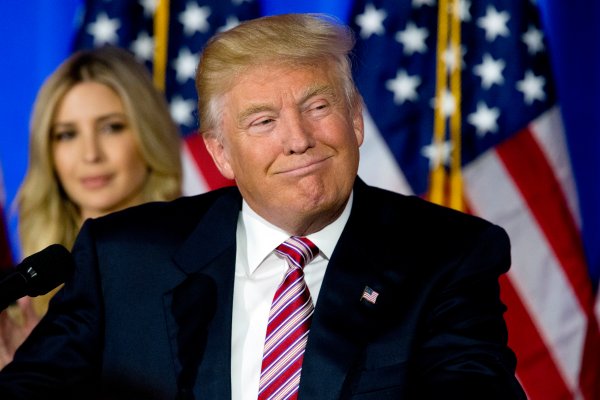 8 Things Donald Trump Must Do to Hit Reset on His Campaign
Next Up: Editor's Pick