A group of black, Muslim, Asian and Latino leaders organized for the campaign of Donald Trump plans to meet with Republican National Committee in the coming weeks to develop strategies for reaching out to racial and ethnic minorities in the general election.

“We are not looking for photo ops or trying to make ourselves look good in the press,” said Bruce LeVell, a jeweler from Atlanta who is executive director of the National Diversity Coalition for Trump. “We are looking at seriously hey, Mr. RNC—or should I say Mr. and Mrs. RNC, because it is an entity in itself—how can we help you? And in return, they are like, well, how can you help us?”

Some 35 members of Trump’s unofficial diversity team have confirmed they will travel to RNC headquarters in Washington to meet with its leadership, LeVell says. The group, which Trump has met with, also includes Cleveland pastor Darrell Scott, reality TV star Omarosa Manigault, and Trump business advisor Michael Cohen.

They plan to meet July 1 with the RNC’s deputy political director Jennifer Korn and national director of African American initiatives Telly Lovelace. Chairman Reince Priebus, LeVell says, has not yet confirmed his participation. “The RNC invited the NDC for Trump to meet with us,” an RNC official confirmed to TIME. “The meeting is still in the planning stages. We look forward to working together.”

LeVell tells TIME that he has created battle playbooks for Republicans to reach Hispanic, African-American, and Asian voters, and he plans to share and develop those with the RNC. The primary issues LeVell says his constituents are concerned about are criminal justice reform, education, jobs, and heroin addiction. “Let’s get in the grassroots about what the Republican Party is about, and how they help us and how can we help them, and how can we nurture this new wave of people that has bought into Trump’s vision.” LeVell says.

The meeting comes on the heels of Trump’s recent attack on the judge presiding over the Trump University class action lawsuit. Trump called judge Gonzalo Curiel, an American born in Indiana, “Mexican” and “very hostile” because of his parent’s Mexican heritage. House Speaker Paul Ryan has called Trump’s attack “racist,” and Newt Gingrich called them “inexcusable.” The RNC’s head of Hispanic media relations, Ruth Guerra, resigned this month over the presumptive nominee, according to the New York Times. Her replacement, Helen Aguirre Ferré, previously criticized Trump for his comments about immigrants in Tweets that have been deleted.

Trump’s diversity coalition supporters have been defending the candidate this week. Cleveland pastor Darrell Scott, the CEO of the NDC, argues that Trump’s statements about Curiel’s Mexican heritage are made “as a plaintiff and not as a presidential candidate.”

“Because of the fact I know Mr. Trump is not a racist, I am not even looking at it through that lens,” says Scott, who is black. He also echoed Trump’s concerns about Curiel’s professional associations. Curiel is a member of the La Raza Lawyers of San Diego, a professional association for Latino lawyers, which is distinct from the National Council of La Raza, a Latino organization that does political advocacy.

Mark Burns, a black Trump surrogate and preacher from South Carolina, has also raised concerns about Curiel’s connection to La Raza, which Burns describes as a “Hispanic race-exclusive group.” “If I had a judge, as a black man in America, and I discovered later that this white judge was actively a part of the KKK, then I would naturally draw some conclusions that I had been treated unfairly for any reason,” Burns says. “Black people in America have been treated just like that, for the color of the skin.”

Trump said Sunday that it was possible that a Muslim judge would be unfair to him, since Trump has called for a temporary ban on Muslims entering the country. Sajid Tarar, founder of the NDC group American Muslims for Trump, said he agreed with Trump. “If this judge was a most liberal judge, it is worth looking into it,” he says. “If he was tried by a Muslim judge, of course, and there is a chance that he might not get a fair chance of justice or something. I agree with him 100%.”

Tarar says he has expanded his group to nearly 500 members in some 17 states, and he is planning a fundraiser for Trump in the DC metro area in August. Scott and others are preparing for the convention next month. LeVell, a delegate, is already looking past Trump’s inauguration. “There will be a new RNC chair in January,” LeVell predicts. “Mr. Trump gets to select that person.”

The RNC, for its part, has been working to move past the presumptive GOP nominee’s comments. “We definitely are not the campaign, so we do not answer for the candidate’s specific remarks,” Korn says. “What we concentrate on is making sure that we are out the field that we are continuing to build.” 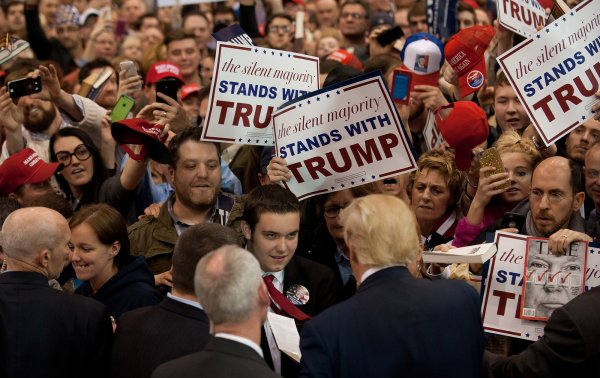 There's Now a Dating Site For Donald Trump Fans
Next Up: Editor's Pick