Donald Trump Makes Me Proud To Be Mexican

I was recently waiting to board a plane in Chicago when a fellow passenger asked me: “Are you Muslim?”

I felt her glare. Apparently, all I’d done was move from one group Donald Trump reviles to another.

I’m proud of my heritage. But I shouldn’t have to explain why I have brown skin. Or that I’m fourth-generation Mexican-American in the U.S. Or that I was born in Chicago.

My father, who is also Mexican-American, was born and raised in San Antonio, Texas. When he was growing up, in the 1940s and 1950s, there were restaurants in San Antonio that displayed signs that read: “No Dogs or Mexicans allowed.”

Trump began his presidential campaign with gross and inaccurate stereotypes of Mexican immigrants, calling them criminals and rapists. Now he is attacking U.S. District Judge Gonzalo Curiel, saying his Mexican heritage makes him biased. He has repeatedly called him “the Mexican” even though Curiel was born in Indiana.

These statements were enough for Republican House Speaker Paul Ryan to finally call out Trump’s comments as “the textbook definition of a racist comment.” Yet Ryan and most other Republicans still support him for President.

Trump is now walking back his attacks on the judge, saying his comments were misconstrued. But the damage of Trump wielding the word “Mexican” as a racial slur has been done.

He is fomenting hatred of Mexicans in the U.S.

From Iowa to Indiana, Latino students at basketball games have been taunted by chants of “Build a wall!!” or “USA!!!”Latino teens were attacked by white supremacists at a park in Los Angeles in February. And this month at a school in North Carolina students inspired by Trump built a wall of cardboard boxes. They claimed it was a prank, but this is an act of racial intimidation against Latino students that should be punished.

Of course, there were hate crimes against Mexicans and Mexican-Americans before Trump’s rise. People of Mexican heritage have faced a long, dark history in the U.S.—of discrimination, segregation and lynching.

And even before Trump became a candidate, people questioned my identity and whether I was really from the U.S.

But to have a presidential candidate make racist comments on the national stage puts all of us who don’t fit the stereotype of what an American looks or sounds like in danger. Non-whites in the U.S. often have their objectivity or their allegiance to the U.S. questioned for no reason except for their name or the color of their skin.

When my great-grandfather rode a horse from Mexico into Texas in 1890, you didn’t need a green card. He just paid a nickel to cross. He later became a deputy sheriff and was killed in the line of duty in 1913.

There are countless Mexicans and Mexican-Americans who have served the U.S. and died protecting it like my great-grandfather. And we can’t ignore the economic contributions of the undocumented and how they enrich the U.S. by paying billions each year into Social Security.

Perhaps the woman I met at the airport didn’t know this. But she didn’t get her fear and hatred of Muslims and Mexicans from nowhere. She was reminded of them by Trump.

My heritage doesn’t make me less American. So, now, when people ask me what I am, I answer simply: “I’m American.”

And I hope that when people hear Trump’s demonizing people based on their race, religion, ethnicity or heritage, they will recognize it for what it is: un-American. 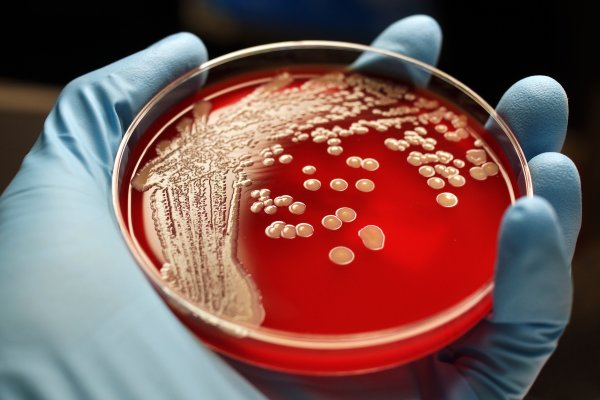 How to Stop Superbugs
Next Up: Editor's Pick